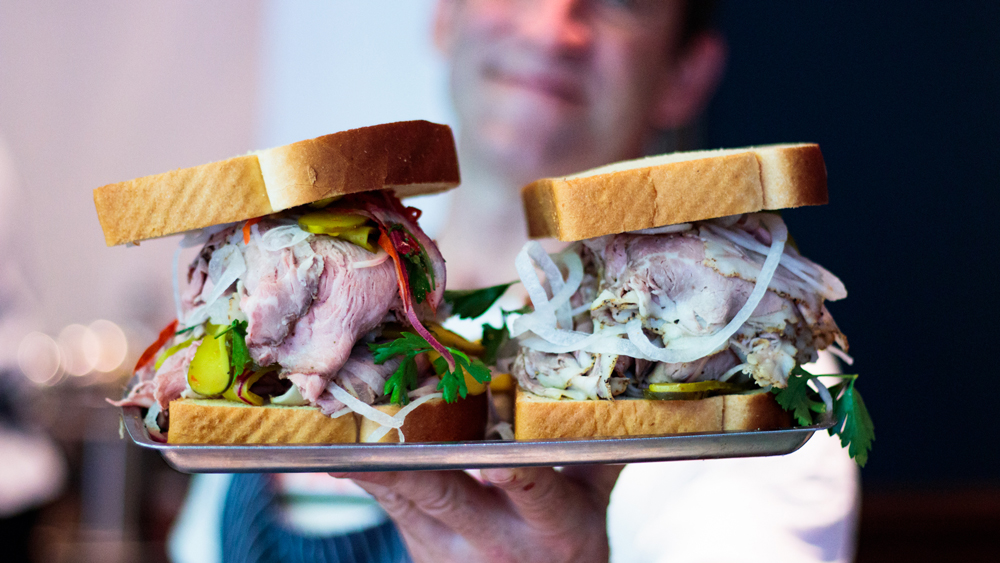 The hypebeasts couldn’t stay away. On a warm Wednesday morning in Hollywood, they started lining up on Vine St., standing atop stars on the Walk of Fame, with their queue stretching past director John Ford, but not quite within reach of Clark Gable. They weren’t there for a celeb in the traditional sense. After all, what celeb would walk near the teeming tourist mob of Hollywood Boulevard in the middle of the day? The man they wanted to see was a star in their eyes: celeb chef and barbecue legend Adam Perry Lang.

The day before, Farley Elliott illuminated the local foodie bat signal over at Eater LA, letting the hungry hordes know that Lang’s lunchtime take out window would open for the first time at 11:30 am. So these fans of food, who also happen to be fans of lining up with other fans of food, convened well before the appointed hour. It wasn’t only time to eat, it was time to rack up some likes on the ‘Gram.

Lang gained his devoted fanbase in LA with a little help from his friend Jimmy Kimmel. The late-night host’s show films about a mile away from where people were currently gathered, and until 2015, Lang hosted an epic barbecue on the studio’s backlot that would intermittently return for a few weeks at a time. In the intervening years, the barbecue hall of famer changed up his focus. He’d still fashion himself a zenmaster of beef, but he devoted his efforts to creating a steakhouse instead of another barbecue restaurant like his former New York place Daisy May’s.

APL Steakhouse opened in May, but Lang didn’t want to totally abandon his barbecue roots. Attached to the restaurant is a 70-square-foot room that used to be a one-seat barber shop. He’s decided to turn it into a little shop with a to-go window to serve lunch to the office workers in the neighborhood. On this day a team of cooks huddle inside, furiously assembling sandwiches and chili dogs under the watchful eye of a mural on the back wall by street artist and Lang friend David Choe.

As I wait in line, I peruse the menu that’s as small as the room the food is made in. There’s a house cured smoked beef sandwich, a chili dog with prime beef, a dry aged beef chili dog, and then the big boy. The reason why I was there. The $50 Serious Barbecue Sandwich, made with over a pound of pit-cooked prime New York strip that’s sliced thin then piled on Texas toast along with pickles, sweet onions, and freshly grated horseradish. There’s a reason to line up, because he’s only planning to make 10 of these a day. The people back near John Ford may be out of luck.

During his backlot days he served a $50 sandwich and it would sell out. “I wanted to do a high-end sandwich. No holds barred,” Lang tells me. “It’s me getting to cook without thinking about the food cost. It’s for someone who wants the very best beef sandwich they could have by using the best ingredients. Sometimes we want to spoil ourselves with extreme decadence.”

When the sandwich arrives, it’s a behemoth. It comes wrapped in an APL branded cloth that’s tied in a bow. Unwrapping it like a present, then peeling back the butcher paper, there’s an epic stack of beef awaiting, reminiscent of a sandwich of Lang’s youth in New York. “It’s my upbringing,” Lang says. “At Katz’s Deli the waitress would come over and say, ‘Young man, can you open your mouth for me? I want to see if this sandwich will fit in it.'”

As my friends and loved ones remind me, my mouth is plenty big, but there is almost an unhinging of the jaw needed to take a bite. The beef is perfectly tender, the thinly sliced onions provide a nice crunch, and the pickles have a subtle sweetness. Because I’m a glutton, I also have the $9 Hot Shot sandwich to bite into. And actually, the contrast doesn’t do a lot of favors to the $50 sandwich. The cured beef in the Hot Shot has a beautiful saltiness that makes you wish the Serious Barbecue sandwich had a nice sprinkling of sea salt on the inside to up the seasoning a little.

Not that my fellow line-goers minded. They snapped pictures with their sandwiches, ordered ample chili dogs, and the nicest among us hauled off big bags filled food to give to people with better things to do than stand in line with us.