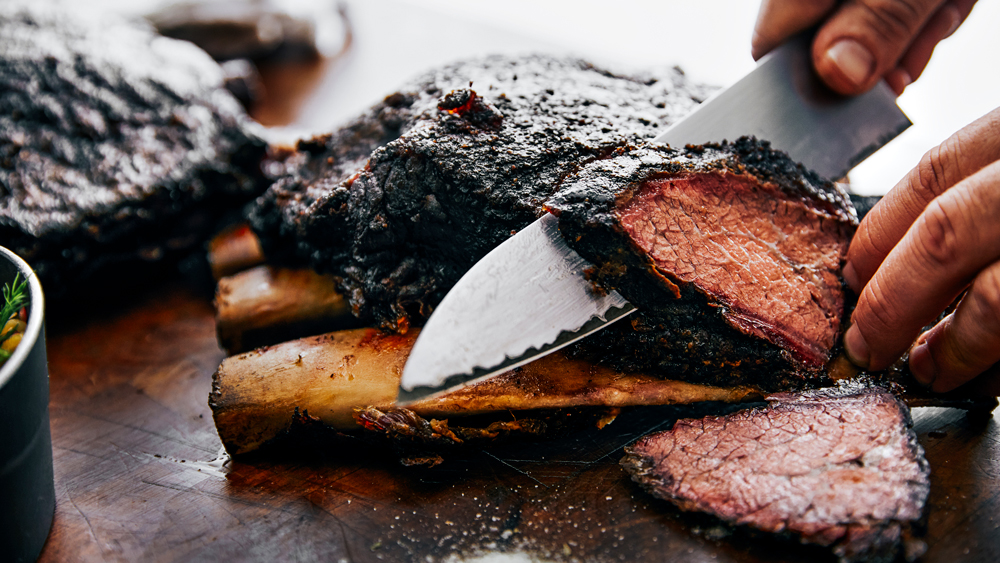 Before he turned himself into a Hollywood steakmaster, Lang was an renowned pitmaster. He’s in the Barbecue Hall of Fame, his Serious Barbecue pop-ups on the Jimmy Kimmel backlot were the stuff of legend and he’s also written three cookbooks on the topic. Now his APL Restaurant is going full brisket (and pulled pork and ribs) for summer lunch with APL BBQ, starting today. On Instagram, Lang promised he’d be personally slicing meat.

The menu is built around Perry Lang’s infamous $50 Serious Sandwich, made with pit-cooked, shaved, dry-aged prime rib. Previously a limited-edition item at APL’s Hole in the Wall take-out window, it, and all of APL BBQ’s offerings, will now be available for sit-down lunch (you order at the bar, then grab a table in the dining room).

Other sandwiches are pulled pork, beef short rib burnt ends (when available) and the “Double Beef Chili Dog” (If you want that 150-day dry-aged burger, you’ll still have to wait for dinner).

Brisket, pulled pork and pork ribs are sold by the pound, with a $32 per-pound beef rib (which will almost certainly weight more than one) available on Saturdays only. Sides include baked beans, spicy coleslaw, potato salad and pickle salad.

Perry Lang originally made his barbecue bones at New York City’s Daisy May’s, which he opened in 2003 (here’s the New York Times review of Daisy Mae’s, by now-Los Angeles Times food editor Peter Meehan). In 2005, his pork shoulder won the American Royal in Kansas City (aka “The World Series of Barbecue”). And, as Los Angeles magazine’s Garrett Snyder noted, one of Perry Lang’s 21-foot smokers was custom-built by Aaron Franklin, of Austin’s Franklin BBQ (Franklin is also a fan of APL’s dry-aging).

APL BBQ is open Tuesdays through Saturdays from 11:30am to 3pm, though as with all good BBQ joints, that really means “until we’re sold out.”