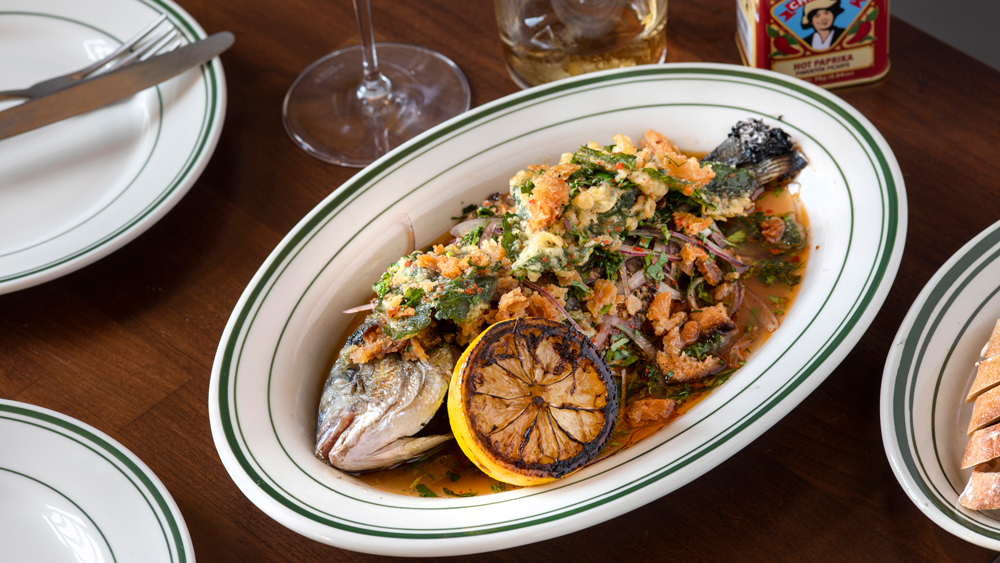 Life, as they say, is about second chances, but sometimes the stories get a lot more interesting and meaningful when you realize that second chances often don’t come to fruition. So for beloved LA chefs Chris Feldmeier and Ricardo Zarate, this moment feels like a culmination and also a deeply satisfying fresh start.

On March 23, Feldmeier and partner David Rosoff resurrected their Spanish-inspired Bar Moruno at a new location on Sunset Boulevard in Silver Lake, where they’ve also partnered with Zarate. Zarate plans to open Causita, a Nikkei-Peruvian restaurant, just down the block from Bar Moruno in mid-April. In between Bar Moruno and Causita is Rápido, Feldmeier and Rosoff’s gourmet market and sandwich shop, with a wide selection of meticulously sourced tinned fish, wine and Jyan Isaac bread.

In 2016, Osteria Mozza alums Feldmeier and Rosoff debuted Moruno at the Original Farmers Market and also opened Bar Moruno at Grand Central Market. Both spots closed in less than a year. Feldmeier remembers he and Rosoff having disagreements with their former partners. Plus, the locations were suboptimal, with customers complaining about parking and traffic. It just didn’t work. So now, on a bustling restaurant row, in a neighborhood where people actually stroll to dinner, Feldmeier is ecstatic about having an opportunity to make tapas, grill 72-oz. tomahawks, serve rotisserie cabbage with pickle-mushroom yogurt and turn his live-fire fantasies into a reality.

“How rare is it that you get to open not only one restaurant, but two with the same brand and then have them both shutter, and then get an opportunity to kind of redo it and fix the problems that you had before?” Feldmeier says.

Feldmeier has been elated to see his dining room full and his bar turn into a standing-room-only situation. Bar Moruno has a counter, what Feldmeier calls “a drink rail,” for standing guests. And the action there has been lively.

The restaurant is specializing in high quality conservas.  Anne Fishbein

Feldmeier wants Bar Moruno to be a choose-your-own adventure experience. You’re welcome to come for appetizers, wine from the Iberian Peninsula or a progression of gin cocktails that pull from the restaurant’s collection of more than 40 gins.

Or you can make it a grand feast, ordering among the steaks, double-bone “tomahawk-style” pork chops, whole orata and rotisserie chicken. There’s a section of the menu dedicated to eggs, including chorizo Scotch eggs and tortilla Española. Bar Moruno serves an extensive selection of tinned fish, and Feldmeier and Rosoff are thinking about putting together a reserve list that might include $40 and $50 tinned octopus with paprika.

Bar Moruno shares a prep kitchen with Causita and Rapido. That kitchen is also what Zarate will use for dinner service, but it has a wood-burning rotisserie and grill that’s reserved for Bar Moruno. And there’s also a wood-burning oven inside Bar Moruno itself.

Sample one of the restaurants many Gin & Tonics.  Anne Fishbein

Operating three spots on the same block and having a shared kitchen is tricky, Feldmeier says. But he saw a huge amount of foot traffic and repeat customers in Bar Moruno’s first week of service, so it finally feels like his restaurant is in the right place.

Zarate says he’s been energized by neighbors strolling by and asking when he’s opening Causita. Zarate, the pioneering Peruvian chef behind LA sensations that have included Mo-Chica and Picca (both of which have closed) along with Rosaliné, wants to reinvent himself at Causita. Instead of serving classic Peruvian dishes like lomo saltado, he’s leaning hard into Nikkei cuisine, which merges Peruvian and Japanese cooking. But he says it’s important to be humble and respect the neighborhood around him, so he’s not making sushi rolls because Causita is next to a Japanese restaurant, Kombu Sushi.

Instead, he’ll have udon with Peruvian pesto. He’ll plate mushrooms with wasabi tobiko. Causita’s version of sushi will involve putting raw fish atop causa, which are potato cakes. Zarate will serve ceviches and tiraditos but says these will be “more delicate and more refined” than what he has done before.

“I really love the community,” Zarate says. “The people here embrace the local businesses. Every day, somebody’s knocking on the door and asking, ‘When are you guys opening?’ It’s very exciting, and it makes me want to work harder to bring something new.”