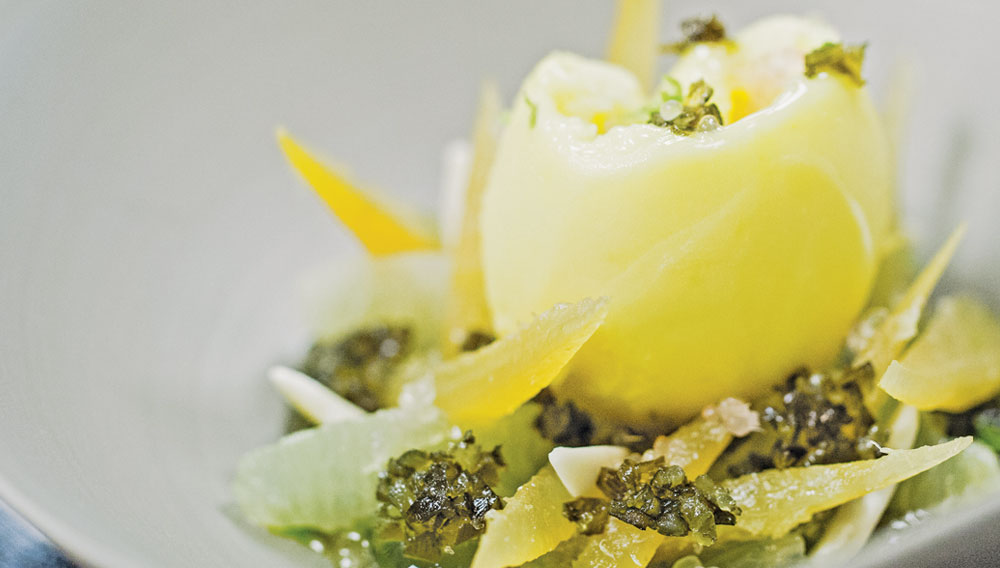 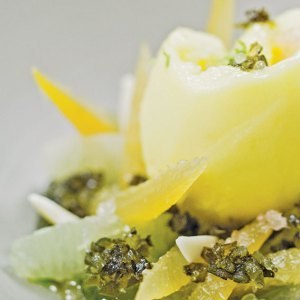 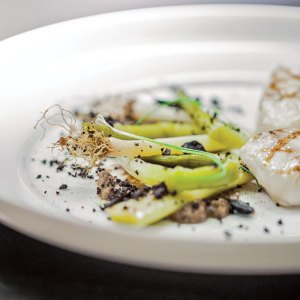 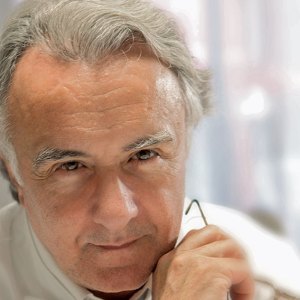 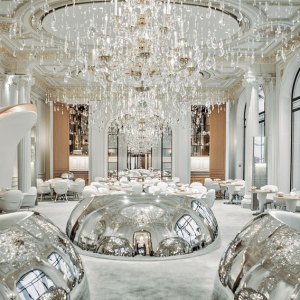 Parisians hate to hype good food, but they cannot stop talking about Alain Ducasse’s recently revised and reopened Michelin three-star restaurant at the Hôtel Plaza Athénée. There, he has banned meat from his printed menu and given his imprimatur to an ascetic new style of haute cuisine that promotes simplicity, good health, and environmentalism.

“My new cooking is about the pleasure of good health and good food, which means eating less animal protein,” Ducasse said a week before the restaurant opened in September. He will serve meat, he explained, but only a few small cuts chosen by the famous Paris butcher Hugo Desnoyer. “Eating less meat is not only good for us as human beings, but it’s also good for the planet, since raising animals is resource intensive and an inefficient way of producing protein. So my new kitchen is based on less fat, less salt, and almost no sugar, and it’s centered on vegetables, fruits, cereals, and fish and seafood from species that aren’t threatened by overfishing and which are caught by small-boat fishermen.

“When you’re working with the very best produce, cooking is about celebrating the purity of taste,” Ducasse added. “I think of my new cuisine as a serene cuisine, since our intention isn’t to shock or even surprise, but to create that deep sensation of well-being, both physical and emotional, that comes from being well-fed.”

A few days later, on a soft Indian-summer evening, the doors to the new Alain Ducasse au Plaza Athénée opened for its third dinner service. While waiting to enter, an elegant-looking blonde in a vintage Chanel suit peered inside the redecorated dining room and exclaimed, “Elles sont toutes nues!” (“They’re all naked!”) She was shocked to see bare wooden tables at a restaurant that, at about $320 to $485 per person, is one of the most expensive in Paris. “We did it deliberately, bien sûr,” Ducasse explained. “They’re a clue as to how a meal here will be different.” By different he meant a meal that artfully planed down the rites of haute cuisine. This is a style that he first introduced with chef Christophe Saintagne nearly two years ago, when Ducasse took over the kitchens of Le Meurice.

Le Meurice was, in fact, the laboratory for an experiment Ducasse has pushed even further at the Plaza Athénée. At Le Meurice, for example, the tight arrangement of flowers in a silver bowl that usually serves as the table ornament in a serious French restaurant has been replaced by a tomato or a couple of baby carrots on a wooden shake. And in case diners miss the point, nearly every meal at Le Meurice includes a tasting portion of sorrel or olive relish, depending on the season, and an amuse-bouche of seasonal greens served alongside rocks of Himalayan salt. Since Ducasse acquired Le Meurice, he and his team, including chef Romain Meder, who runs the kitchen at the Plaza Athénée, have continued to refine the idiom of a new French haute cuisine. Now le Tout-Paris has a chance to experience the results.

In the dining room of Alain Ducasse au Plaza Athénée, the designers Patrick Jouin and Sanjit Manku have ditched the conventions of aristocratic grandeur that previously characterized the space. The room’s focal point is a deconstructed crystal chandelier in which each piece of cut crystal is suspended from an invisible wire. Jouin and Manku furnished the room with an oversize hooded love seat and three rounded chrome settees that resemble a small fleet of flying saucers. The design has a 1960s retro-futurist look, but ultimately it is clean, daring, and handsome, and most important, under the direction of the maître d’hôtel Denis Courtiade, none of the restaurant’s regulars are going to feel lost—at least not until they open the menu.

It is an unexpectedly monastic bill of fare, but then other restaurants that print such plain prose—such as Vedge in Philadephia and Dan Barber’s Blue Hill in New York City—are just setting up diners to be dazzled when the food arrives at the table. Still, how good could a first course described as vegetables from the gardens of Versailles with crushed hazelnuts be? Or a main course of  turbot in Champagne sauce with watercress and turnips?

Very good, it turns out, yet it is undeniable that some of the lusciousness created by fat and salt—and expected in a luxurious French meal—is missing. However, that certain succulence does appear, of all places, in Ducasse’s salt-cod tripe. It is one of the world’s best dishes, with an amazing equilibrium between the lightness of seafood and the extraordinary umami richness of its sauce, a deeply stewed mixture of tomato, fish stock, and citrus.

The challenge of finding the inflection points between food that tastes good and food that is good for you is not limited to Paris. Chefs in the United States and other countries are also engaged in similar experiments and innovations. But because France remains the Western world’s referee for ne plus ultra gastronomy, what is happening in Paris will doubtless rewrite menus around the world. This may be especially true because the benediction of healthy cooking is coming from chefs as renowned as Ducasse and Yannick Alléno, and from up-and-coming stars such as David Toutain, whose eponymous Left Bank restaurant is one of the hottest tickets in town.

“Ever since la nouvelle cuisine, chefs have been tinkering with how to create gastronomic pleasure with less fat, less salt, less of all those things that aren’t good for your health,” says Alléno, who won three Michelin stars at Le Meurice before Ducasse took over the kitchen. Alléno recently relaunched a grand Paris venue of his own, Pavillon Ledoyen, an elegant old restaurant in the gardens of the Champs-Élysées. “What’s changed since la nouvelle cuisine is that there are new machines and technologies that really advance this process. So for me, the search for taste and pleasure in healthy cooking is about using extractions, or the concentrated juices of various products, and creating a certain percussion of taste with varying tones of acidity.” Alléno’s menu features dishes that are taut ricochets of flavor. They include marinated mackerel with shiso leaves and hibiscus-flower gelée, and crabmeat with fine slices of squid and grapefruit chutney dressed with almond milk.

One well-known American chef—who asked to remain anonymous—is bemused by what strikes him as a Johnny-come-lately interest in healthy eating in France. “You get to Paris and you still see people smoking like chimneys, and they love poking fun at Americans who jog or exercise or who are conscientious about their diets,” he says. “And now they’ve decided healthy eating is important.”

But for a long time, Alain Passard of the Michelin three-star L’Arpège in Paris and Pietro Leemann, who has been running the Michelin-starred vegetarian restaurant Joia in Milan since 1999, have quietly espoused healthy eating. Leemann, who became a vegetarian in 1985, calls his cooking alta cucina naturale (natural haute cuisine) and says it is the “inevitable evolution of nutrition for ourselves and the planet.” Trained by the great Swiss chef Frédy Girardet, Leemann creates a seasonal menu so refined and deeply satisfying that it is easy to forget the food is healthy. A perfect example is his dish of steamed eggplant with chanterelle mushrooms, blueberries, pumpkin, baby beets, and preserved ginger.

The food at Seamus Mullen’s Tertulia in New York City and David Bouley’s New York City restaurants, Bouley and Brushstroke, are similarly satisfying and healthy. Mullen codified his approach to healthy gastronomy in a popular cookbook, Hero Food: How Cooking with Delicious Things Can Make Us Feel Better, which prescribes a diet based on 18 ingredients, parsley and olive oil among them, that Mullen says helped in his battle with rheumatoid arthritis. These ingredients also get star billing at Tertulia, his Spanish-inspired restaurant.

Bouley’s restaurants are supplied with fresh herbs from the chef’s event space called Bouley Botanical. Bouley has jumped ahead of Ducasse, Alléno, and other old-world chefs by working with nutritionists and doctors to create healthy recipes for his restaurants. During New York City’s Food & Wine Festival last fall, for example, Bouley worked with Dr. Mark Hyman, author of The Blood Sugar Solution, to create several recipes for a dinner called The Chef and the Doctor. The recipes included an almond soup garnished with glazed scallions and “Forager’s Treasure of Wild Mushrooms: Sweet Garlic, Special Spices, Grilled Toro, Black Truffle Dressing.” The forager dish has become a fixture on his menu at Bouley.

Ducasse has been bolder than Bouley, however, by banning meat from his menu and by making a prominent commitment to sustainability. In Paris now, great food is not only delicious but also good for you. Odds are, this sentiment will become the gastronomic trope of the 21st century.