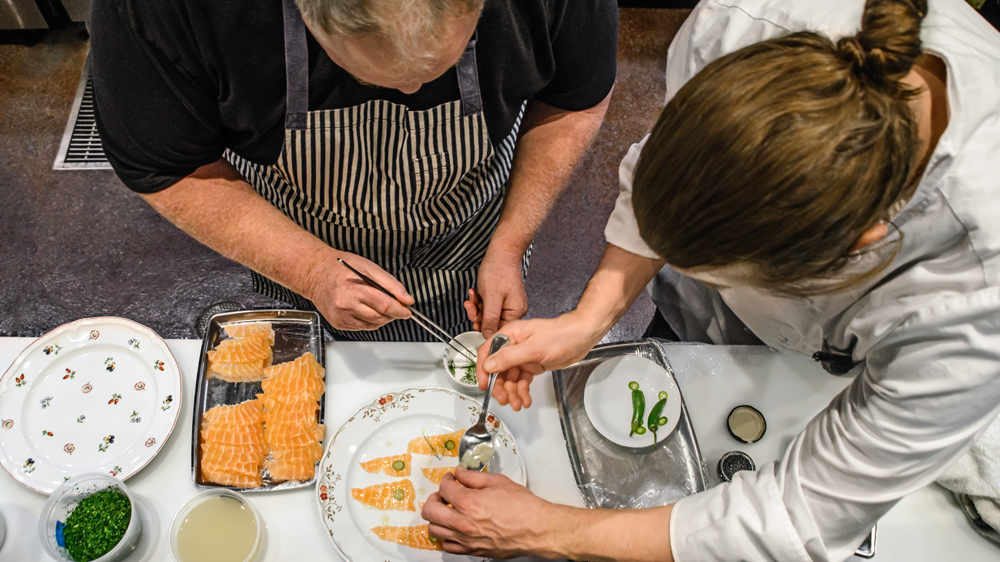 After a year that’s been rougher than anybody in the restaurant industry could have imagined, Las Vegas chef James Trees is cautiously planning for a lot of success in 2021.

“Right now, I’m feeling very lucky and very scared at the same time,” Trees tells Robb Report. “It’s so weird to be opening this giant restaurant and at the same time watching cities like L.A. and San Francisco completely locked down again.”

But Trees, a 2020 James Beard Award finalist for his work at Esther’s Kitchen in Las Vegas’s Arts District, has been planning his next chapter for two years. There’s nothing for him to do at this point but move forward with Al Solito Posto, a gigantic Italian restaurant he plans to debut at the Tivoli Village development in January.

Trees has been R&Ding lasagna, rigatoni alla vodka, chicken parm and eggplant parm for Al Solito Posto, which translates to “the usual place” in Italian. Even minestrone has been tested repeatedly as Trees and his team experiment with the textures of vegetables and try different cooking techniques as they work toward making perfect broth.

“Minestrone has become one of the most beautiful dishes,” Trees says. “We took it back to all the details that have gotten lost. We want to have a more thoughtful version of all the classics that you see a lot. I want to go back and not reinvent but take a look at what people think are standard items and then elevate them at the highest levels.”

Or put it another way: “I didn’t think it was possible to make 100 pans of lasagna.” But he’s been spending a significant amount of time seeing how his wood-burning oven affects the texture of the baked pasta.

Al Solito Posto’s version of chicken piccata will be roast pasture-raised chicken that’s brined overnight and rubbed with piccata butter. That dish will include a sauce with chicken jus and pan drippings, which you’ll probably want to pour over the accompanying potatoes. The menu will also have cioppino and a steak-and-chops section with Mishima Reserve American wagyu and Santa Carota beef.

Al Solito Posto, with about 180 seats inside (including close to 50 at the bar) and a patio with room for another 100, is a huge undertaking compared to the 62-seat Esther’s Kitchen. But Trees predicts that people will flock back to dining after the pandemic subsides.

“We’re going to hold strong at our restaurants,” he says. “There’s going to be an insane demand. It’s gonna be bacchanal orgy-style restaurants, three deep at every single bar in the world. We know that’s coming. If we can survive this last dark part of winter, we know there’s a beautiful happy bright side. We know people are ready to get back to work. We’re feeling like we’re in a really good place.”

So Trees is also planning to reopen his Ada’s restaurant at Tivoli Village in January, transforming it into a wine bar inspired by tapas bars in San Sebastian and Barcelona. He admits he’ll be ripping off the salmon rillette he used to make when he worked for Eric Ripert at Le Bernardin in New York. At the new Ada’s, he’ll serve that salmon rillettes with bread from Esther’s Kitchen. Trees and chef de cuisine Jackson Stamper (formerly the executive chef at Employees Only in New York), will also offer other small plates at Ada’s like Iberico chorizo croquettes and mushrooms that come with taleggio cream and a sunny-side-up egg.

The pandemic and the declining number of hospitality jobs in Las Vegas has made it easier for Trees to hire talent from high-end and high-volume casino restaurants. Al Solito Posto chef de cuisine Shawn Smilie’s credits include Joël Robuchon, B&B Ristorante and The Buffet at Aria. At Ada’s, every employee on the floor will be at least a level two sommelier.

Beyond Tivoli Village, Trees will continue to bet on the Arts District, where he plans to open a market by Valentine’s Day that will feature fresh pasta kits, sauces, bread, wine and other provisions. He’s also expanding the room where pasta is made at Esther’s.

Trees is moving forward despite his Vegas restaurants being restricted to 25 percent capacity right now. He’s doing it even though he closed Esther’s Kitchen for a weekend and lost $35,000 to $40,000 of revenue in November after some employees tested positive for COVID-19. (Trees has also been taking care of his father, who was hospitalized for 90 days after getting the virus.) Known for his candidness, he posted an Instagram video explaining the closure to his customers.

Instead of being bummed about these setbacks and also how the James Beard Awards were cancelled this year, Trees is keeping his head up. He’s humble enough to say that he doesn’t believe he’s the kind of chef who should have a James Beard Award. But at the same time, a lot of Beard winners and nominees have had to close restaurants this year, so the fact that Esther’s Kitchen is still here feels like a victory by default. The loyalty of his customers has carried him through, Trees says.

“What 2020 has made me realize is that without our community, my restaurant would be closed,” he says. “Our community in Vegas is just as strong as any other city in America.”

And, yet, he knows what he doesn’t want to do in order to survive. He remembers how restaurants scrambled during the 2007-2008 financial crisis, and how dishes like meatloaf and mac-and-cheese became more popular.

He refuses to lean on comfort food now.

“The opportunities are here, and chefs are pushing forward,” he says. “You don’t see us doing the stupid shit you saw in 2008. We’re not making hamburgers and meatloaf. We’re continuing, knowing the product we have is good. Chefs know their audience. They know luxury has to exist even in this time.”