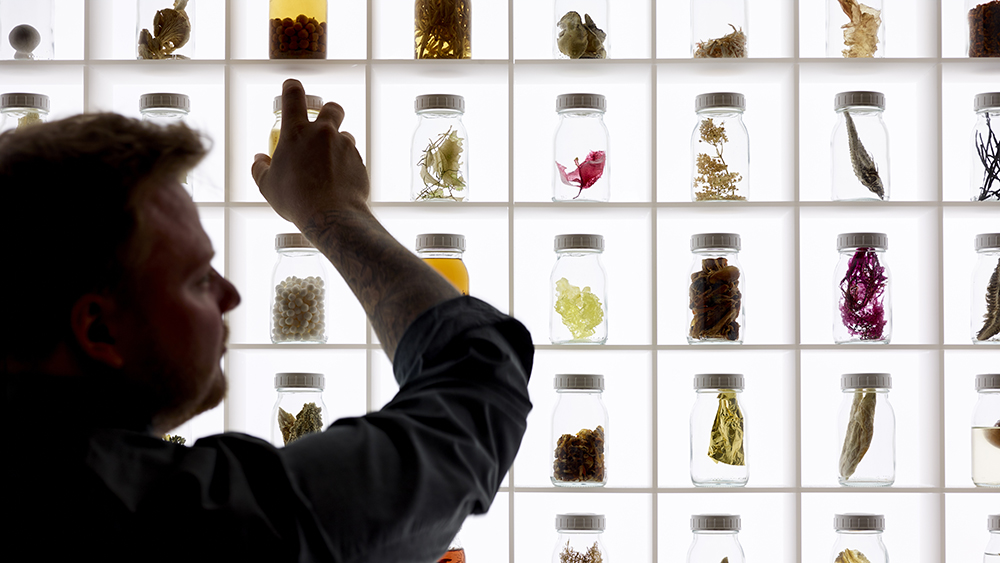 The Michelin-starred Copenhagen restaurant Alchemist has long tried to raise awareness about a multitude of issues, from food waste to organ donation. Now the restaurant is working with researchers in Denmark to come up with a sustainable seafood alternative.

As part of a study funded by the Good Food Institute, Leonie Jahn of the Technical University of Denmark will join forces with Diego Prago, the head of research at the Michelin two-star restaurant, to create a new seafood product by growing fungi on seaweed, New Food magazine reported on Monday.

“I think there’s huge potential here—there aren’t a lot of seafood alternatives on the market but there’s certainly a need for them,” Jahn told the magazine. “This is also an area that hasn’t really been explored before.”

Alchemist originally opened in 2015, the vision of chef Rasmus Monk, who found a foothold merging fine dining with activist art, creating dishes like “Food for Thought” where foie gras is served inside the cast of a human head. But the thought he wanted to impart was that foie gras was possible without force-feeding birds and that he’d found a farmer raising the delicacy that way. Eventually Monk moved into a larger restaurant that he opened in 2019 that merged food and theater over the duration of a 50-course meal that was a full-sensory experience. Alchemist has shown time and again its willing to push the limits of what dining can be.

Jahn and her team will be focusing on filamentous fungi, microorganisms found in soil and elsewhere that form a mass of intertwining strands. These fungi are already used in meat alternatives, but the focus has so far been on their nutritional value rather than their texture. Jahn’s team will aim to specifically figure out how that texture can be changed to create animal-food substitutes that still look and taste like meat.

Using the fungi to ferment seaweed, in a process similar to that for making tempeh, the team will ideally create a “whole cut” product with the texture of seafood. Then, working with those at Alchemist, they’ll also re-create the flavor of seafood.

“Our main goal with the project is to attempt to create a unique and delicious product that is good enough to be served at a fine dining restaurant, using natural ingredients with seaweed providing flavors of the sea and the mycelium adding to an attractive texture,” Prago said.

Right now, Europe imports three times more seafood than it produces, according to New Food, and global demand for seafood is expected to double by 2050. In the European Union, almost half of marine habitats have been labeled as endangered or near threatened. If Jahn, Prago and their teams are able to create a sustainable seafood alternative, it could help satisfy that rising demand without further eroding the oceans.

And, if successful, the seafood alternative might end up on Alchemist’s menu, just another example of the restaurant’s mission to do good in the world.