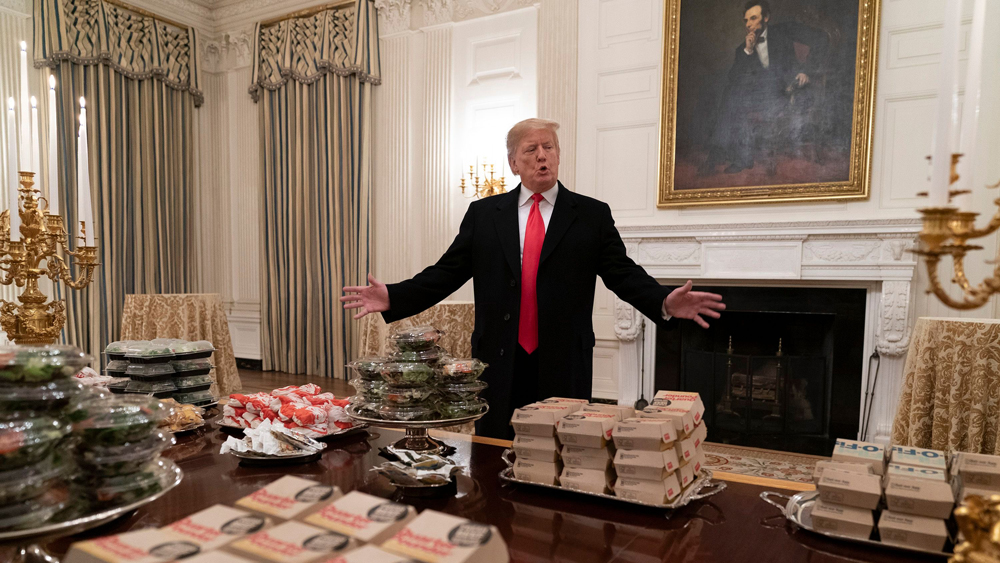 It’s a picture that has been hard to escape: Donald Trump doing jazz hands behind a vast spread of fast food in full view of Abe Lincoln’s gaze. The national champion Clemson Tigers football team had come to the White House, and the 45th president of the United States wanted to serve these big beefy boys some processed American beef.

The image of gilded candelabras above Big Macs and sterling silver trays displaying ketchup packets didn’t sit particularly well with one outspoken restaurateur. The co-owner of Alinea, Nick Kokonas, tweeted out that he would host the team that crushed Alabama a week ago and give them a proper feting.

I could care less about college football. But I'm personally inviting the Clemson Tigers team and coaches to Chicago to experience what an actual celebration dinner should be.

Someone let them know what The Alinea Group does. It'll be worth it@ClemsonTigers

Kokonas, a former derivatives trader, opened the Michelin three-star Alinea with chef Grant Achatz in 2005 in the city’s Lincoln Park neighborhood. They built it into an icon of molecular gastronomy and one of the world’s most influential restaurants. They’ve since opened Roister, Next, Aviary, and the Office, as well as the reservation service Tock.

While the Alinea Group’s offices are just a few blocks from McDonald’s brand-new headquarters in Chicago’s West Loop neighborhood, what they serve is a galaxy away. The players may be able to get a hot dog at Alinea, but they won’t receive a link of Vienna beef in a poppy seed bun. It’ll be a crystal-clear bite of the distilled essence of a Chicago-style hot dog.

As people questioned Kokonas on Twitter about his offer, he held firm that it was real, and said would be much better than the White House dinner. “It’ll cost a LOT more than $3k. I mean, that’s not even the vintage champagne budget for those of age,” he wrote. There would be no “hamberders,” as Trump called them in a quickly deleted tweet yesterday.

nothing wrong with fast food from time to time. But when you knock off a national championship, it's time to teach our youth that there are experiences to strive for in life moving forward :-) Plus… in the white house? no.

We contacted Kokonas and he told us that no one from Clemson had reached out to him yet. Of course, this being the NCAA, they’d probably punish players who attended. After all, they once threatened to suspend players who ate too much pasta at a graduation banquet. And the NCAA sanctioned Utah basketball coach Rick Majerus for buying meals for players, including the trip to a deli to console Keith Van Horn the night his dad died. So Nick may be serious about the team heading to Chicago, but the Clemson athletic department’s compliance officer may be just as serious about stopping it from happening.