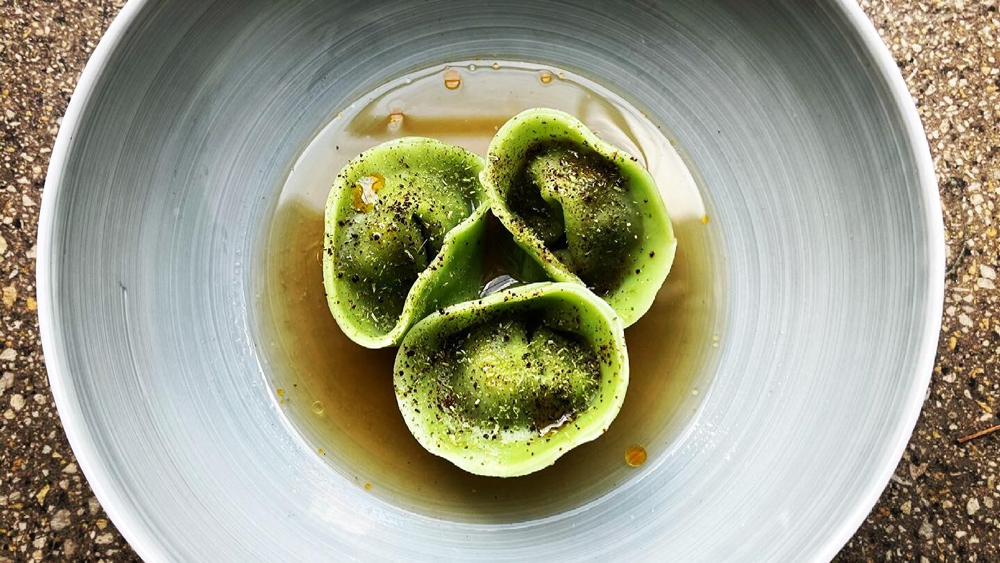 Gaggan Anand, arguably the most famous Indian chef in the world, is outspoken in his disdain of the Michelin Guide and its inspectors. In a recent interview, he called the food critics racist against Indians. But one of his young apprentices—who is opening Chicago’s first Indian tasting menu restaurant this week—doesn’t completely agree with his mentor.

“You want me to be honest?” asked chef Zubair Mohajir, who was born in India and raised in Chicago. “It’s on us Indian chefs. We have just been too lackadaisical and too simple with our own food. We’ve been too afraid to push the boundaries. But a change is coming. People are taking more chances. We pride ourselves [at my restaurants] on being on that road and whether we’re pioneers or not, where we’re going is going to give people a different perspective and a different opinion on what Indian chefs are.”

Mohajir, who is behind the boundary-bending South Asian street food spot Wazwan, is preparing to reveal its fine dining neighbor, Aman, this week. Aman opens for a special Diwali dinner series beginning Friday, Nov. 4, and then officially offers its tasting menu to the public Friday, Nov. 12. There is one seating a night. Reservations are currently available on Tock.

Located in Wicker Park, Aman will feature an eight-to-10-course tasting menu of traditional, vibrant Indian dishes, prepared with Southeast Asian and French techniques that he picked up from his time working under Thomas Keller, Jean-Georges Vongerichten and Gaggan Anand. The restaurant is an ode to his grandmother and their family home, which was named Aman, in the city of Chennai in Southern India.

“This was the house that all my food memories are in, my mom, my grandmother were all cooking together there,” he said. “That house doesn’t exist anymore in the family, so the thought was, why not recreate that same experience for our guests? Having these people here is kind of like inviting them into our home.”

Mohajir started his professional career not in the kitchen, but in banking.

“Coming from an Indian household, becoming a cook is not really a first option,” he said. “Expectations are always something professional, an engineer, a doctor. I was like, hey, as long as I go to work in a suit Mom will be happy.”

After getting a degree in finance, he put on a tie and worked in banking for seven years.

“I hated my life,” he said. “When 2008 happened, when the market crashed, I got walked away from my desk. And it’s funny because I look back now, and I was standing in the Financial District on LaSalle Street in Chicago, and I was probably the only motherfucker with a smile on his face. I felt so free.”

He took it as an opportunity to figure out what he wanted to do with his life. He started a social media company and kept ending up in bars and restaurants, taking food photos to post to his platform. It reminded him that he loved cooking, not online networking. So, he completed a certificate program at Le Cordon Bleu in Chicago and then jumped into the culinary world full-time.

He started at the bottom, as a prep cook for Jean-George Vongerichten at the (now shuttered) Pump Room in Chicago, and worked his way up to sous chef over the next two years. Then he moved to Napa to work under Thomas Keller at the then Michelin one-star Bouchon Bistro in Yountville.

“I feel like my brain was unlocked out in Napa—the produce and just the whole Thomas Keller culture, how to build a dish, how to build balance in a dish,” he said.

In 2017, Mohajir and his then-pregnant wife were forced to evacuate Napa due to the Northern California wildfires. While he had no intention of ever returning to the Windy City, that’s where they ended up and where they had their son.

In 2018, he launched a wandering supper club, an idea that had been ruminating in his mind for years. Named Wazwan in honor of the 36-course, celebratory culinary tradition of Kashmir, the gourmet dinner series attracted eight people. Then it grew to 25, 50, 123 diners a night. He drew the attention of the food industry because his South Asian tasting menu concept was novel and everything being halal (Mohajir is Muslim) was even more unusual.

Later that same year, Mohajir moved to Bangkok to do an apprenticeship at Gaggan, the ground-breaking Indian restaurant from chef and owner Gaggan Anand. (Anand appeared in season 2 of “Chef’s Table.”) At the time, Gaggan was the No. 1 restaurant in Asia and the No. 4 restaurant in the world.

“Bangkok was like somebody unlocked another part of my brain,” Mohajir said. “Being at Gaggan, I had never seen Indian food being served like that before. There was no naan, there were no greatest hits. There were just super creative forms like pani puri served inside of a white chocolate Easter egg that looked like a quail egg and exploded in your mouth.”

Gaggan also used equipment like dehydrators, which Mohajir had only associated with French food before.

“His flavor profiles and techniques gave me so much exposure to not only what food could look like, but the fact that there’s really no rules. You can do whatever you want,” Mohajir said. “I just started going down all these different roads, like this is very similar to that. This is how we use chiles here, but that is how they use them there. Making those connections gets your brain working and going down different routes and things just get more and more creative.”

When Mohajir returned to the US, he was inspired all over again. Taking a cue from Bangkok’s bustling street food scene, he ditched the exclusivity and brought his fare to the general public. For a local food fest, he took his signature dish—a tandoori-cooked and fried chicken breast with a Filipino atchara (papaya pickles) and 15-spice honey-butter sauce—and slapped it inside a French brioche bun. The resulting sandwich, the THC Sando, was a cult phenomenon, and gave birth to Wazwan’s new identity: composed, creative street food. He opened a food stall at Politan Row food hall.

Then, this summer, he settled Wazwan into the hip Wicker Park neighborhood, where he now offers a 10-item menu with dishes like black truffle korma, made with coconut milk and cashew butter instead of ghee.

But he never lost his love for fine dining. And it just so happened that behind Wazwan’s location, down an alley covered in graffiti, was a radically different space with very good bones. Built 150 years ago as a carriage house, the building had been converted into a bar about a decade ago, but had been mothballed since. Mohajir thought it would be perfect for his fine dining concept, which he would name Aman. He transformed it into an intimate, 25-seat space, with lots of vegetation and a 10-seat chef’s counter.

“I wanted to cook Indian food professionally, but I didn’t want to cook the greatest hits you see every day at Indian restaurants,” he said. “We’ve kind of dumbed down our own cuisine in America or even across the world. Our cuisine is not just meant to be family-style. I mean, I love my chicken tikka masala and I love my naan, but the country’s culinary traditions are way too rich to just rest on those few things. So, our mission has become to explore more than that.”

For research, Mohajir picks the brains of his aunts and uncles. What did they eat as kids? What dishes didn’t make the move to the US? India has thousands of years of culinary traditions to pull from. One traditional dish he discovered this way was faraa, basically Indian pasta, which looks like Italian gnocchi but is made of rice flour like Korean tteokbokki, or rice cakes.

“I was just kind of digging,” he said. “It’s really cool for me to find things like that because it builds those bridges from Europe to the Middle East and the Indian subcontinent to the absolute Far East. We have all these things in common—there’s little things that are different along the way, but they’re very familiar at the same time.”

At Aman, he’s blanching the faraa like he prepared gnocchi at Thomas Keller’s restaurant, then sautéeing them in a pan with turmeric, coconut broth and a sweet-spicy Filipino condiment called palapa, which is made with toasted coconut, toasted garlic, ginger, red Thai chiles and fresh scallions. (Quite a few of the dishes at Wazwan and Aman include Filipino elements because his chef du cuisine, Chris De La Cueva, is Filipino.)

Many of the classic French techniques he learned have found their way into the Aman kitchen, like how he meticulously builds sauces from scratch. Instead of cooking a big pot of masala on the stove and reheating it to order, he does it little by little, caramelizing the garlic and ginger, and adding chiles at the right time to build flavor.

He also shocks vegetables to preserve their color and flavor at the same time. He promises his saag paneer (made with fresh paneer) is not brown.

“That sounds so simple, but it’s not something that’s commonly done in India because a lot of things are either pickled or just overcooked,” he said.

Other dishes on the opening menu include Tibetan momo dumplings that are stuffed with a South Indian pumpkin curry and served with a beurre monté (butter sauce) seasoned with house-made aged soy sauce. There are also Indian flatbreads filled with black truffles, brushed with ghee and topped with his specialty achars—Indian pickled condiments—like mango-Pequin chile or sesame-tomatillo relish. Plus, a coconut-mulberry milk cake sprinkled with torn mint.

From here, he wants to take the menu regional, exploring the many cultures, religions and languages of his home country.

“We always try to push the boundaries and create things that are new,” he said. “[Indian chefs] have just gotten too comfortable depending on the classics. There’s a time and place for classics, but that’s not fine dining. It’s not good enough to just put butter chicken in a copper pot.

“I think innovation is where our challenge lies. It’s on us to make sure our traditions live on, but we’ve got to add on to that. It’s got to change, it’s got to evolve. We can’t just be eating the same shit 20 years from now.”