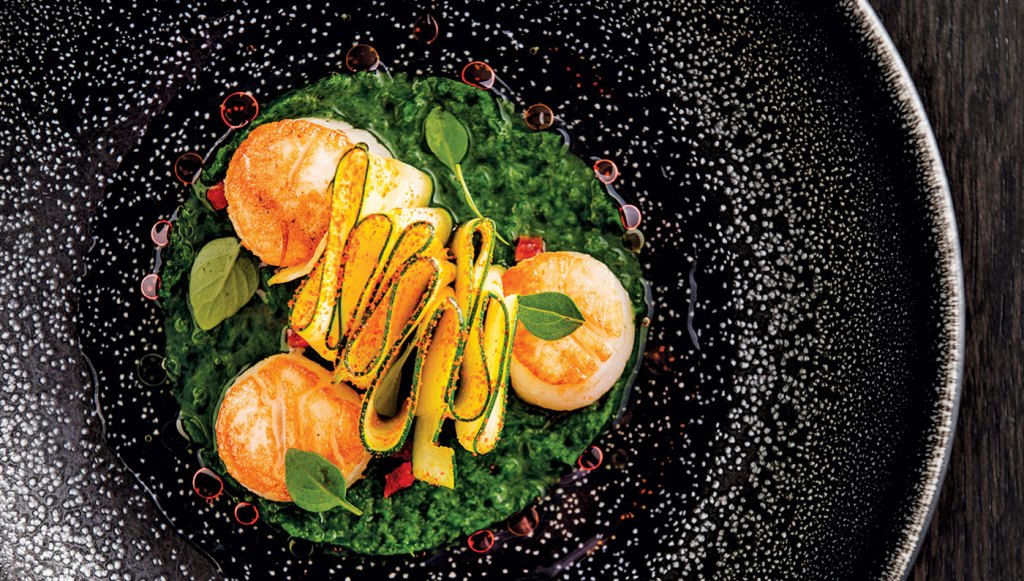 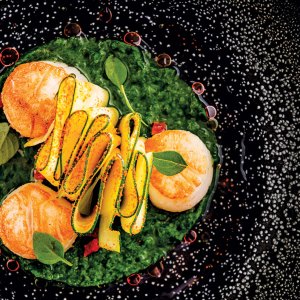 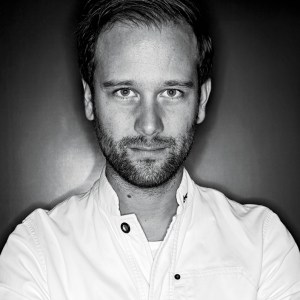 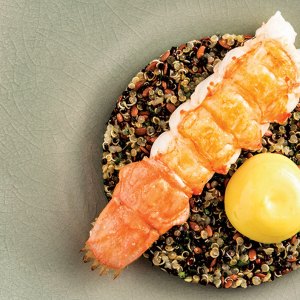 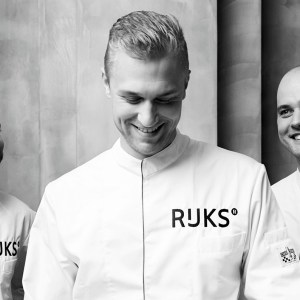 Amsterdam’s au courant culinary scene has the makings of a dynamic renaissance.

Amsterdam’s Moon restaurant opened in the spring of 2016, and the city’s clamor over it rivals the cheerful clang of plates and pans shuffling through its creative kitchen. For good reason. Built onto the 19th floor of the landmark A’dam tower, the restaurant rises high above the city’s landscape, overlooking its liquid seam of winding canals and revitalized docklands. But skyscraper views aren’t Moon’s only delight: The restaurant’s dining room is laid out on a platform that slowly rotates on its tall perch, continuously circling over a city that suddenly can’t sit still.

That dynamism is something new to Amsterdam, at least with regard to a culinary scene that, until recently, seemed stagnant. Sure, there were some hushed, Michelin-lauded fancy French dining rooms serving haute plates of escargot and duck à l’orange. And there was a range of local homespun cafés offering a catalog of Dutch signature dishes from pea soup to stamppot (a potato-and-vegetable mash). Yet with the exception of a few pioneering locavore restaurants like De Kas, Amsterdam was going hungry; it was mostly famous, at least to travelers, as a place that somehow got sidelined by the global food revolution.

That revolution has finally come to town, and Moon isn’t the only high-wire act in Amsterdam. The city is suddenly dense with restaurants seized by creative ambition, sizzling energy, and a taste for big, high-concept surprises, as if determined to make up for all those decades of culinary caution.

Leading the charge is a fresh wave of wunderkind chefs. Take Moon’s 32-year-old executive chef, Jaimie van Heije, whose food is a match for the restaurant’s revolving bravura. “There is a whole new generation of cooks  ➻ now opening so many new restaurants, and we all inspire one another,” he says. A signature plate of pork belly reflects van Heije’s own blended heritage, which includes an Indonesian father; the pork comes infused with rosemary, thyme, Dutch lemon, and an Asian accent of coriander. Equally exuberant, on the five-course tasting menu, is a dish of scallops laid over an eggplant puree and topped with shaved truffles. “In the end,” van Heije says, “I want my food to be playful and fresh, my own style.” That means even a bowl of wagyu tartare, rich enough on its own, comes anointed with leeks, herring roe, and shiso broth.

Moon’s high-flying act and exuberant kitchen enjoy plenty of local competition. Sitting just across the water, on the lip of Amsterdam’s refurbished harbor front, Wolf Atelier exemplifies the city’s new propensity to tuck restaurants into odd places. In this case, an enclosed glass bridge—hoisted on metal pilasters above the dockland waters like a balance beam—doubles as a restaurant. The dining room is a long tube of industrial chic, with concrete floors and hanging copper lights, nestled in beside the open kitchen where 32-year-old chef Michael Wolf and his team move as perpetually as the water beneath them.

“I came to Amsterdam almost 8 years ago from Austria and never left,” Wolf says, “partly because the food scene here is becoming more and more exciting. And because Dutch ingredients, especially the quality of seafood, is so fantastic.” His menu—which shows off the kind of pristine catch that is pulled daily in a country built on water—is proof. Silky slabs of fish are an homage to the fresh Dutch herring sold in every local street-food stall, and are meant to be eaten Amsterdam style: held by the tail and swallowed whole. Wolf’s rendition is paired with sweet red beets that play off the briny fish. His grilled sea bass, robed in a Champagne curry, comes coupled with a homey, Dutch-country-kitchen carrot puree; a mackerel ceviche is dotted with lemon meringue. Follow any of these with a perfect plate of Wolf’s foie gras, crowned by Granny Smith apples, and the payoff is surf and turf in an authentically Dutch style.

Away from the docklands and in Amsterdam’s historic core, the culinary masterworks keep mounting. At the year-old Restaurant Breda, on the edge of the gentrified Jordaan neighborhood overlooking one of the western canals that curve past gabled 17th- and 18th-century townhouses, another young chef is plating his own version of a culinary call to arms. “I mix in French, Asian, Latin, and Dutch accents,” says Freek van Noortwijk, who at 29 is already sure of his culinary direction. Speaking of Amsterdam’s precocious young chefs, he says, “We don’t restrict ourselves to stale rules other people invented years ago or to old-fashioned luxury ingredients like caviar and truffles. We just want to cook what we want, with the most flavor, using the simplest, rustic, Dutch products.” That results in a seamless, frequently changing three-course lunch, served in a cozy dining room topped by a beamed ceiling. A dish of cured haddock dressed with wild watercress, herring roe, and smoked crème fraîche may be followed by a plate of brussels sprouts, both fried and blanched, tossed with pickled onions, autumn truffles, and smoked ham. The kitchen’s rib eye is sourced from a plump Dutch dairy cow that lends a deep, gamey flavor; dessert is often a simple sorrel granita topped with a ginger yogurt that pays a second tribute to Holland’s wide swath of dairy lands.

The same patriotic salute to local foraging is being dished up at Rijks restaurant, located further south in the city’s revitalized museum district. When the restaurant opened in the fall of 2014, in a wing of the Rijksmuseum, it attracted a lot of attention. The Rijksmuseum, the showcase for every Dutch master from Rembrandt to Vermeer, is a national treasure house, and the debut of its namesake restaurant was a major culinary statement. Two years later things are quieter, and executive chef Joris Bijdendijk has had time to refine the menu beyond the public glare, resulting in a restaurant that has fully come into its own.

Like almost all of Amsterdam’s chefs, Bijdendijk sources as much as possible from a slow-food network. “Dutch veal, beef, and pork,” he says, “are as beautiful as our fish.” But his cooking gets added inspiration from the museum itself. “When there is, for instance, a big Asian exhibition, we invite an Asian guest chef to help cook and create dishes that run the duration of the exhibit.” But even when there is no linked exhibit, the dishes streaming from Rijks’s open kitchen into the sleek, airy dining room seem infused by artistry. Langoustine bundled up in tempura batter comes laid over mango butter infused with a wasabi tang. Slices of duck breast, resting on pumpkin puree, are drizzled with chopped hazelnuts and barley pearls. Ginger-glazed veal sweetbreads are complemented by a Malaysian peanut sauce that references a colonial past, when the Netherlands controlled Malaysia and much of Southeast Asia. For dessert: a rice pudding, a traditional Dutch feast-day and wedding treat, paired with kaffir-lime leaf that imparts a subtle accent. “Never,” Bijdendijk says, “pile too many flavors on a plate.”

That philosophy is also evident at the Michelin two-star Librije’s Zusje, in the Waldorf Amsterdam, where chef Sidney Schutte plays exuberantly with his food. Every dish is its own miniature masterwork of flavor, color, and structure. But even away from the city’s grander addresses, the culinary scene remains exciting, such as at Restaurant C, in Amsterdam’s eastern district, where the local talent for the unexpected is on full display. C (which stands for Celsius) divides its menu into sections based on four variations in cooking temperature: raw and cold; low temperature; steamed and cooked; and grilled, plancha, or tempura. The result is a meal that slowly changes shape and literally heats up. Dinner may start with a chilly dish of tuna tartare cooled by scoops of curry ice cream. Then it slowly builds to dishes like a monkfish paired with a tangle of crispy rice noodles, followed on a recent menu by a cooked mushroom pasta under truffles and a bubbling egg yolk. Final entrees, like an octopus barbecue tossed with pepper and chorizo, or a duck masala, heat things up to a full sizzle, in terms of both temperature and spice, before dessert brings the meal back down to the freezing point, often with a whey granita. The roller coaster of a menu, slowly playing with the palate, is meant to be rousing enough to jolt the diner awake, and it does. For anyone dining out in Amsterdam and sampling the full range of local restaurants, it can also make for the perfect last meal in town. Maybe the city used to rely on its scenic charms—and it still emphasizes those with a new architectural playfulness—but now its artful dining scene has added the masterful char of culinary perfection.

Many visitors to the Netherlands never travel outside of Amsterdam, and that means they’re missing out on both natural and culinary beauty. In spring the country’s most eye-popping attraction is the Bloemen Route, or Flower Route. Starting just west of Amsterdam in Haarlem, the signposted loop runs 25 miles south to Leiden, through the dense heart of Holland’s tulip fields where ribbons of color—yellow, plum purple, deep red—bump up against the lowland horizon. Save time for a meal in Leiden. The university town’s In den Doofpot restaurant, located in a 17th-century building fronted by a waterside terrace, plates a menu of Franco-Dutch classics. A tenderloin of Dutch beef and a lobster bathed in truffle butter are among the signature dishes. It’s the neighboring ’t Crabbetje, however, that offers a sublime taste of Holland’s daily catch—from mackerel cooked in honey to perch paired with baked apples or a tartare of scallops served with sweet-pea gazpacho. On the return trip north to Amsterdam, consider a pit stop in Haarlem. The city’s Michelin-starred Restaurant ML is famous for executive chef Mark Gratama’s exuberantly layered flavors. Creative combinations like smoked eel with coffee or passionfruit and foie gras equal anything Amsterdam’s buzzy new bistros can whip up.