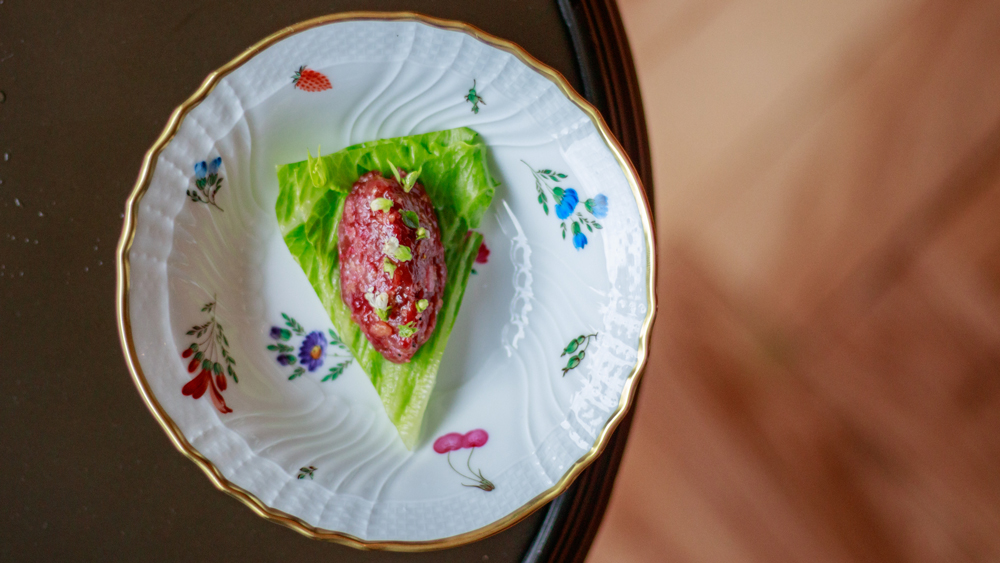 Looking into Joshua Skenes’s immaculate new kitchen, with all manner of hearth and grills and live-fire cooking apparatuses, the first word that comes to mind isn’t “casual.” There’s some serious cooking happening in full view of the dining room, where servers swarm in tailored navy suits and crisp white shirts.

But for the chef of Michelin-three-star Saison, this is more casual than the 18-seat tasting-menu restaurant in San Francisco where he made his name. Peel your eyes away from the kitchen and you’ll see big game fish mounted on walls, a taxidermy bear over in the separate bar that looks like a hunting club in Alaska, and a chef in a camo hat in the corner having a little fun with fine dining. This is Angler.

Though Skenes is trying for a more casual setting for his cooking, much of the ethos of Saison does live on in his new restaurant that opens this week. The team works closely with producers—from fishermen to farmers—to source pristine ingredients, there’s a special attention to live fire cooking, and, of course, like at Saison there’s a private-batch caviar, too. But unlike Saison, this menu is à la carte, so you get to build your experience yourself.

Angler, as the name implies, is focused on seafood. Chefs have the luxury of a massive live tank crawling with sea creatures. Each day, fishermen deliver their daily catch to the restaurant to the pier across the street. Along with those creatures, on the opening menu they’re featuring a raw bar that includes big-eye tuna, purple sea urchin, and diamond turbot. The main courses include fire-roasted spot prawns, California king crab, Monterey abalone, and giant octopus.

In anticipation of opening Angler—his first new restaurant since he started Saison—Skenes has stepped away from the day-to-day running of his flagship restaurant. He lured Laurent Gras, chef of the now-closed Michelin-three-star restaurant L20 in Chicago, to become executive chef of Saison. Because for Skenes, this is just step one in his expansion plans. After he feels comfortable with the state of the San Francisco Angler, he’s heading south down to Los Angeles to open another restaurant. He’ll keep that one casual, too.