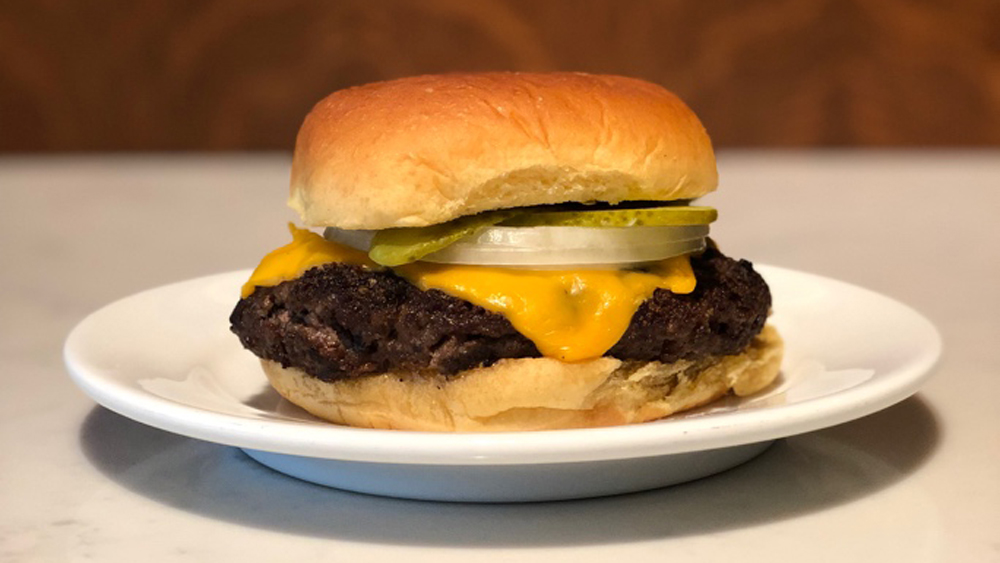 How do you like your burger? The answer used to be as simple as “rare, medium-rare, or medium?” (there are no other answers). Cheese or no cheese. Choose your vegetables and condiments. But now you also get to see its birth certificate.

The dry-aged burger has been around as long as there’s been dry-aged steak, from the legendary lunch-only option at Peter Luger to Minetta Tavern’s infamous “Black Label” burger. But just how aged (and dry) can one man’s burger be? If that man is zenmaster of meat Adam Perry Lang, the answer is 150 days. Plus.

At $18, it’s a bargain item, especially compared to APL’s $50 Serious Barbecue Steak Sandwich (that’s found at the restaurant’s Hole in the Wall takeout window, as is a dry-aged beef chili dog). The 150+ day beef is also available at APL in the form of a bone-in-NY Strip or Tomahawk. Or you can have a mere youngster of a dry-aged ribeye: “<100 Days Aged.”

What stands out about APL’s The Burger is its simplicity. We’re a long way from the heyday of Daniel Boulud’s short rib and foie gras-stuffed burger at DB Bistro Moderne, as Taste’s Rebecca Flint Marx explored in an essay earlier this year. In the new burger arms race, everybody’s got a custom blend, and more places than not are just as happy with American cheese as cheddar or blue.

But for the presence of aioli, Lang’s burger is pretty close to the platonic, stripped-down ideal of the late food writer Josh Ozersky, with whom Lang cooked. (Another friend of Ozersky’s, Dallas chef John Tesar, serves a burger named for him at Knife in Dallas, which is also just beef, cheese, onion and pickles.). Minetta’s Black Label is also uncomplicated, eschewing even cheese (and no topping other than caramelized onions) in order to showcase the meat.

APL’s burger comes on the heels of a 100-day dry-aged burger at butcher shop and restaurant Belcampo (which just opened its first NY location in Hudson Yards). Before that, the now-closed Culver City location of New York’s The Cannibal put up a 60-day dry-aged burger at a 2017 Los Angeles magazine event. That topped the one from Santa Monica’s BOA steakhouse by 20 days. Peter Luger and Minetta Tavern meanwhile, don’t reveal their aging number.

These burgers all taste good, which is all that really matters. But at some point, it’s also the ground beef equivalent of Nigel Tufnel’s amp in This Is Spinal Tap. “Oh, you’ve got a 100-day dry-aged burger? Our goes to 150. Plus.”