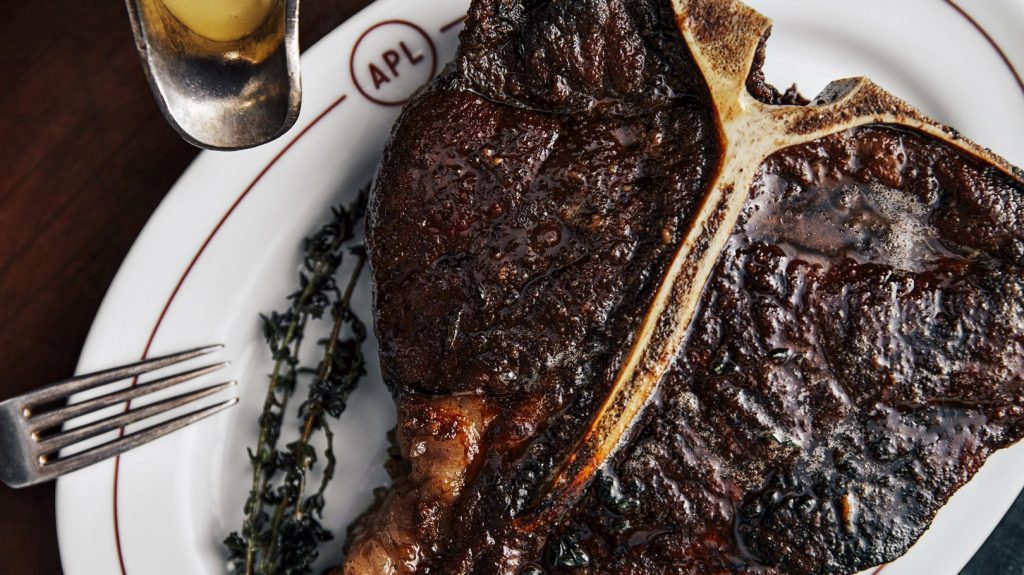 On the backlot behind where Jimmy Kimmel hosts his late-night talk show, you used to be able to find Adam Perry Lang and his smoker. Though the Astroturf, airstream trailer, and park benches would tell you this was a laid-back affair, Lang’s approach to his pop-up picnic lived up to its name: Serious Barbecue. For one of his Hollywood cookouts, Matty Matheson, then the chef at Parts & Labour in Toronto, ventured south to cook with Lang. He was blown away.

“He made the best pork ribs I’ve ever had. They were incredible,” Matheson says. “But he told me, ‘No, I’m not happy with them.’ And we wrapped them up and gave them to a shelter he worked with. That’s the thing I love about Adam’s cooking, is that he’s not afraid to say something is not good enough. He can be seconds away from perfection, and if it’s not perfect, he’ll say, ‘I’m not putting that out.’ He told me, ‘Know your self-worth. This is my name, and I’ve worked hard to build my career, and if it’s not good enough, people aren’t going to have it.’”

That monkish devotion to craft has become Lang’s trademark. After succeeding in iconic restaurants Le Cirque, Daniel, and Guy Savoy, he turned his attention to barbecue. This was no backyard hobby. He opened Daisy May’s BBQ in Manhattan in 2003 and then started entering competitions around the country and winning. He was crowned Grand Champion at the World Pork Expo and American Royal’s World Series of Barbecue. He teamed with Jamie Oliver to open Barbecoa in London and in 2013 was inducted into the Barbecue Hall of Fame. He sold his business, moved to LA, and started hosting pop-ups behind his comedian friend’s theater.

But that wasn’t all he was doing. The fine-dining-chef-turned-barbecue-master has shifted his skill set once again. He’s been building his dream restaurant—a steak house called APL that’s a nod to his childhood in Brooklyn, upbringing as a chef, and devotion to aged beef. After years of planning, Lang is close to opening APL, and though he’s calm on the outside, he’s still sweating every detail of his most personal restaurant yet.

In January, Lang huddles with his team in an industrial park on the outskirts of LA. Surrounded by low-slung buildings and the 405, he ignites his little forge positioned near the garage door of his small warehouse-space-turned-test-kitchen. Among the antiques—his giant smoker that he can hitch to a truck, and a makeshift kitchen—Lang starts wailing away at a glowing slab of hot steel.

While most restaurateurs would just buy steak knives, Lang is forging his own. As is his wont, he didn’t just pick up knife-making passively. He threw himself into achieving mastery with a singular focus. At the New England School of Metalwork in Maine, surrounded by survivalists, he learned bladesmithing.

A few more well-placed swings of his hammer, and he’s done for the day. He’s eager to thumb through old cookbooks he has stacked around the room and contemplate the restaurant some more. “There’s something to be said for classic dishes and classic technique,” Lang says. “I really love tapping what’s familiar and highlighting it.”

His career in cooking, and especially APL, has been about tapping into the familiar. The classic steak house has been front of mind for Lang since he was nine years old in Brooklyn, visiting Peter Luger. “That’s when I first tasted dry age,” Lang says. “There was something so special about it, with these confident guys putting the steaks down on the table, and the service and the smells and the burning bones. The whole thing was intoxicating.”

Here at the industrial park, he’s deconstructing that experience to build it on his own. He’s started with where he’s sourcing his beef, which will be primarily from the Midwest. Going so far as to learning that certain grasses have different nutritional value that affect the health of cattle, he’s also dealing with producers that slaughter in humane ways to keep the animals healthy. Then, when he gets the meat, he dials in how he’s going to dry age it; for him, that sweet spot is around 100 days. “It’s not too funky,” he says. “You can get a lot deeper, but sometimes I don’t care for blue cheese over my steak. I’d rather add blue cheese myself, but I love steak to taste like steak.”

He’s taking that knowledge and tailoring it not to the Luger crowd but to his new hometown. “The flavor profile is a bit more for LA, which is different than New York and Vegas. It’s a bit cleaner flavor,” Lang says. “How can I take your perception of what beef should be and enhance it? I’m not trying to give you aggressive surprises. I’m not trying to convince you it tastes good. I don’t want to be that guy. I want you to really believe it does taste good and then give you the story of how we do it if you want to know more.”

A hard hat isn’t exactly necessary a few weeks out from APL’s planned opening, but there’s still a chance of something falling on someone’s head as workers perched on ladders install the last of the lighting fixtures. Lang is with his contractor in the kitchen, negotiating the placement of a pot filler above the range, making sure it’s right where it needs to be, and he’s surprisingly giddy about something so mundane. “This is where we fight for the details.”

Walking out of the kitchen, there’s a hive of activity inside the ground floor of the Taft building, LA’s first high-rise, as Lang’s crew remakes the space for APL. Electricians, painters, and carpenters move around each other. A wine vendor comes in to do a tasting with the sommelier to finalize the list, and Lang jumps in for a brief sip himself, spits, and then makes his way back downstairs into the catacombs beneath the restaurant where his massive dry-aging rooms are located. Electricians pass by as he inspects the refrigerated rooms where 14,000 pounds of beef will soon be delivered.

Returning to the dining room, he receives his most exciting delivery of the day: a copy of the menu from the printer. It’s one large sheet with little illustrations reminiscent of 1940s steak house menus, evoking a nostalgic vibe. The menu reads like a very personal document to Lang—from the French touches of the crab gratin with béarnaise, to the steakhouse classics he loves like the iceberg salad, to the massive bone-in beef short rib he’s become famous for. One menu in particular stands out as he’s reimagining the prime rib. He’s taking a New York strip loin and preparing it like a rib roast. “I love prime rib, but I think this is a much better eating experience,” Lang says. “If you’re eating ribeye, you have the deckle and the eye, and you have the clump of fat and all these different things. You don’t want to bite into that clump of fat while you’re talking with friends.”

Overall, the dishes, like the dry-aged beef patty melt and shrimp cocktail, are approachable crowd-pleasers. “My friend Chris Bianco of Pizzeria Bianco, the best pizza in America, he’s an über specialist and I’m an über specialist,” Lang says. “He once said to me, and I’ve adopted it: ‘Restraint is the most important ingredient on the plate. What has to be so damn innovative about great food? I find my inspiration lately is not found in trying to be innovative but in stepping back and looking at things and ask what’s really going on here.”

As he approaches the end of his thought, acclaimed street artist David Choe wanders into the restaurant lugging a crate of spray canisters. Choe, a friend of Lang’s who made a few hundred million dollars when he sold his work to Facebook a decade ago for stock options instead of cash, is there to paint a mural on the back wall of a 70-square-foot little room that used to house a one-seat barbershop.

Lang couldn’t give up barbecue altogether. Inside that converted room, he’s going to have a window onto the street where he’ll serve sandwiches. One of the sandwiches will cost around $12, but then his ultra-premium offering will go for $50. “I’m going to make 25 of these a day, wrapped in butcher twine. It’s going to be as thoughtful as the highest-price-point items on the restaurant’s menu, but in a sandwich format. Like maybe a sandwich with sliced barbecue beef on Texas toast.”

Though he can’t stay long enough to watch, Lang sets up his phone to take a time-lapse of Choe painting the mural. The chef is off to yet another meeting, with more details to tend to.

Making sure he has everything right, Lang delays APL’s opening a few days. And it recalls what Matheson said about his fellow chef: “I’m not sure if the cooks there are aware of how particular Adam is going to be,” Matheson says. “When APL opens, he’s going to go insane or those cooks are going to be pistols. In a very positive way, he’s going to push them to excellence.”