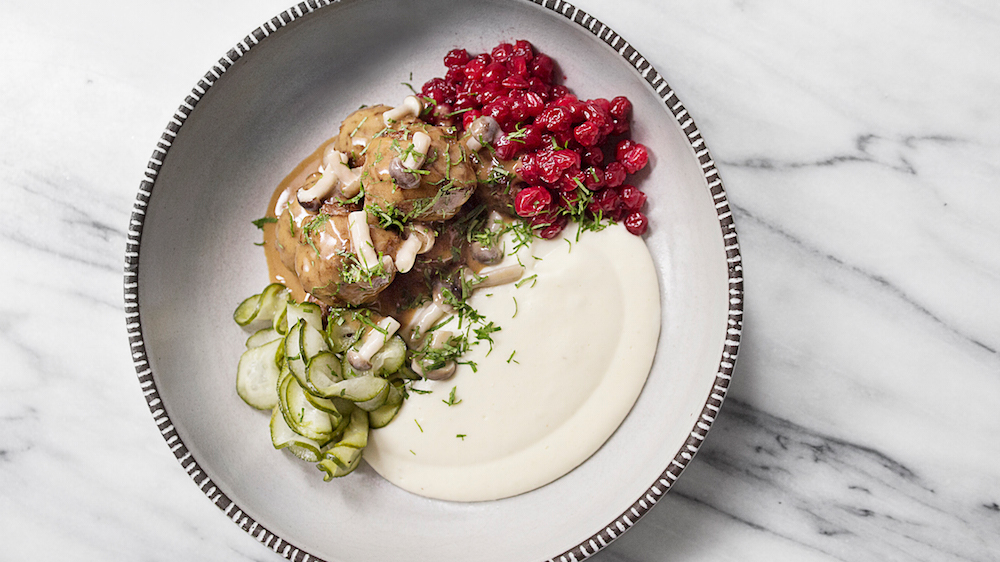 In 2018, New York’s Aquavit was doing something very right.

The Scandinavian restaurant had been an institution in Midtown for more than 30 years—even though restaurant gossipers through the decades always seemed to think it was closing its doors—and in November 2018, Aquavit was awarded two Michelin stars.

The award marked the fifth year in a row that the executive chef, Emma Bengtsson, had received two stars. She was the first Swedish woman chef to ever receive two stars, and she was only the second woman in the U.S. (behind Dominique Crenn) to receive the accolade.

Yet seven months later, in June 2019, owner Håkan Swahn did close Aquavit’s doors. This summer it underwent a total gut job and renovation, adding a 40-seat bar and lounge and retooling its menu. The first phase of the project opened last night. The full 52-seat restaurant, with its updated look and menu, will reopen by the first of November.

“We had taken the restaurant as far we could with the layout we had, and to be able to go even further, we needed a change,” Bengtsson said. “We needed a renovation to be able to succeed. It had to happen.”

The dining room will continue to serve refined classics, or what Bengtsson calls “tweezer-friendly” food, and tasting menus. But it will transition to an even more elaborate, customizable menu. The bar will serve more casual, a la carte plates for sharing.

“We took something that was a little bit in the middle and separated it into two different rooms. But everything is coming from the same kitchen, so it’s really exciting to be able to do both of it,” she said. “We all love to cook hearty dishes, but we also love to do the smaller, more petite pleadings as well. So for us, it’s kind of creating the best opportunity to become a chef, to showcase what we’re all about—you don’t have to choose one or the other.”

Bengtsson spent the summer out of the kitchen, putting the reworked menu on paper, picking out new appliances and figuring out the new layout. But also tracking down local farmers, millers and purveyors for more seasonal and sustainable ingredients, and visiting long-time supplies like Lobster Place, which she says she’s “ashamed” to have not patronized before.

“I wanted to get a better understanding of where the food is coming from before it gets to the restaurant,” she said. “And I’m trying to find and source more locally and organic, and things like that got lost when you’re up and running and you’re too busy to do anything.”

The break was fruitful, but mentally draining for Bengtsson, who has spent the past 15 years practically living in a commercial kitchen. She started as a pastry chef at Aquavit in 2010 and was promoted to executive chef in 2014, the same year the restaurant first earned two stars.

“Going into it I was kind of excited, thinking like, oh my God, I get to have a normal summer! I get to have weekends!” she said. “But then when it came around, it was just hard. Trying to figure out stuff and trying to cook at home is not really the same. You don’t have the same equipment, the same ingredients. All of us were struggling a little bit, having to sit in an office writing on computers. But as soon as we got the clearing in the kitchen, we were all up here trying to cook as much as we could.”

Over the past few weeks the team has been executing everything they had been testing. Their first reveal came on Wednesday night, when they opened the warm-toned bar, which has wood paneling, an oak ceiling and gold-sheen wallpaper.

The menu offers what Bengtsson calls “food you can indulge in every single day, and not have to have a special occasion to do it.” That includes 24 snacks, starters, mains and desserts. You can order dishes such as the herring trio; steak tartare with hazelnuts, foie gras and crimini; Swedish meatballs with lingonberries, cucumbers and pommes puree; pork schnitzel with capers, lemon and brown butter; and Princess cake (a popular challenge on The Great British Bake Off), which consists of layers of sponge cake, raspberry jam, almonds and pastry cream.

Bengtsson, however, is most excited about the new fried cod sandwich: Atlantic cod is brined, coated in a batter that includes beer and vodka and then fried up super crispy. It’s layered on house-made brioche with fresh cabbage slaw and “Rhode Island sauce” (the Swedish term for Thousand Island dressing).

“I’ve been eating one every day almost,” she said. “It’s a lot of things that are a little bit outside of our comfort zone, but still with things we do best here as well.” (And Aquavit does plenty well—this is, after all, where Marcus Samuelsson made a name for himself.)

The prix fixe menu in the main dining room, which Bengtsson prefers to keep a secret, will remain seafood-focused, as the traditional cuisine is. But all the dishes will be new and there will be more options: Diners can have a three-course, five-course or eight-course chef’s tasting menu, and choose from seven starters, seven main dishes and five desserts.

The main dining room is also being updated with Danish wood floors, walnut sofas, half-moon banquettes with dark blue Danish fabric and massive glass doors that look into the kitchen.

“I’ve always dreamt about having an open kitchen and we got it approved. You can see everything in the kitchen; it’s kind of like going to a movie theater. It brings the guests closer to the magic,” she said. But, she admits with a laugh, the glass goes both ways. It also allows her to see their reactions to her food. “It’s super exciting. I don’t tell people, but it’s a bit more for me than for the guests.”

A rendering of the new bar.  Photo: courtesy Aquavit