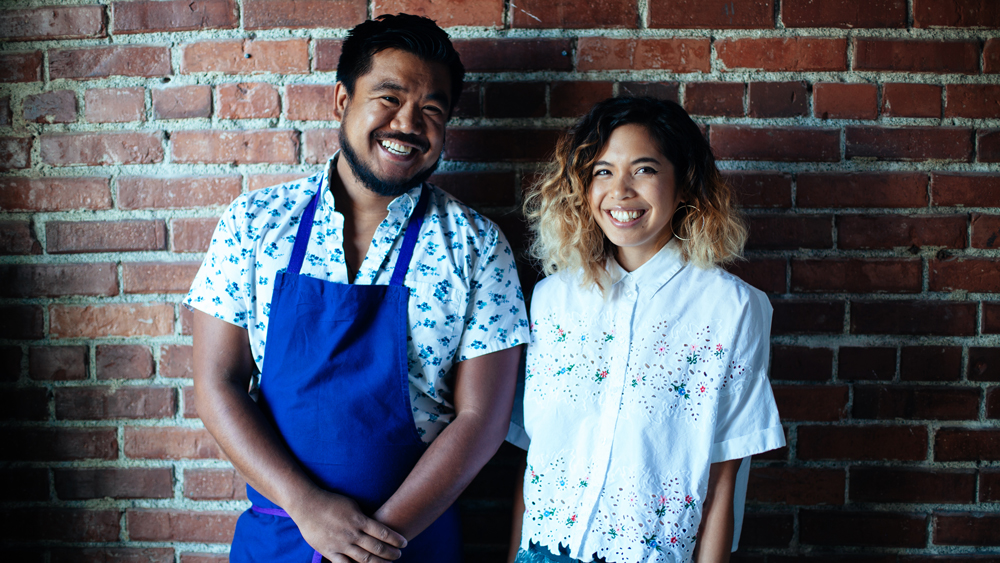 Few Filipino Americans have ever opened a balikbayan box, muses chef Aaron Verzosa of Archipelago, about the giant care packages filled with food, clothing and trinkets sent home to the Philippines from family in the US. But even from the other side, the excitement as relatives pulled out what had been so carefully curated for them inspired the James Beard semi-finalist and Modernist Cuisine alum’s unique pandemic pivot.

Facing the challenge of translating the Seattle restaurant’s nine-course fine-dining journey through the cuisine and history of their community into an at-home experience, Verzosa and his wife, Archipelago co-owner Amber Manuguid, thought back to those 50 pound boxes they lugged with them on so many childhood trips to the Philippines. Filled with physical manifestations of their care and support, the boxes showed them how versed they already were at creating community from far away.

Now they sell their modern version of a balikbayan box to customers both familiar and new to the tradition. Like the ones Filipino workers sent home, Archipelago’s come filled with a curated selection of stuff they think the recipient may like: $90 buys a meal kit for miki noodles with lamb longanisa, vegetables from a Filipino-owned farm, their house-made bagoong (a shrimp and fish paste), a proprietary flour mix, rhubarb jam and other pickles and preserves from the restaurant. “It’s kind of fun,” says Manuguid, “because as a Filipino American, you never get a balikbayan box; you just put them together to bring.”

Archipelago’s food before having to shut down its restaurant to diners  Photo: courtesy Jaclyn Warren

Opening in late 2018, Archipelago brought the story of Filipinos in the Pacific Northwest to guests through dishes such as scallop kinilaw served in a sardine can, like the ones at the canneries where the first immigrants in the area worked. Pork chops came dressed with sauce based on the ubiquitous Filipino condiment of banana ketchup—invented by a University of Washington graduate—but like everything else, made only with seasonal, local ingredients.

But when shelter-in-place orders first came around, the couple had their minds on something else: the late February arrival of their first child, Apollo. Their planned closure for his birth gave the pair a little extra time to carefully consider how they would flip the script of a restaurant predicated on storytelling and experience.

Through the early, uncertain days of the pandemic, they knew they needed to be careful: Aside from the fragility of the baby, they lived with Manuguid’s mother, sister and asthmatic nephew. “We knew that it was going to take patience and time. We didn’t want to jump in,” Verzosa says. They wanted to help their community, including the farmers they worked with, so when they saw other restaurants doing a CSA, it planted the seed for their idea.

“We wanted it to be authentic to who we were and what we were doing,” he says, and looking at boxes he saw similarities to the ones he’d schlepped as a child. Recalling the joy on relatives’ faces when they opened balikbayan boxes, he thought, “Well, how can we bring that to a household?”

As at his restaurant, Manuguid’s background of designing customer experiences for Nordstrom shows in the carefully crafted narrative and aesthetic of the combination farm-share and meal kit. The box, the size of a dorm fridge, stamped with red letters and tied with twine, “is a very cool, tangible thing that is also kind of a romantic representation of remittances back to the Philippines,” Verzosa says.

The packaging alone manages to convey much the same type of story they told when the pillowy pan de sal arrived at the eight-seat counter, rather than in a box. Through the photo cards and recipes tucked inside the nostalgic boxes, they help customers not just cook pork adobo but understand what bagoong is and why it’s important to Filipino food.

“It is fresh and strong,” Verzosa says of the fermented seafood paste that he considers a cornerstone of their balikbayan box and a key ingredient in Filipino cuisine. He lets people know to use it like salt for vegetables in soup or meat but also encourages them to play around with it. You can add it to almost everything, he says, and it gives a dish “instant Filipino-ness.”

Much like the way the restaurant gave diners an immersive education about the Filipino-American experience, the box brings that into people’s homes. “We’re all about our potlucks and parties and gatherings,” Manuguid says. “But at the same time, it’s such a huge reality that families are split up,” something she sees as similar to what is happening to everyone during the pandemic. So, in finding a way to keep the restaurant in business and her customers fed, Manuguid and Verzosa teach customers one more element of Filipino culture: how the community used care packages full of food to keep bonds strong across distances.