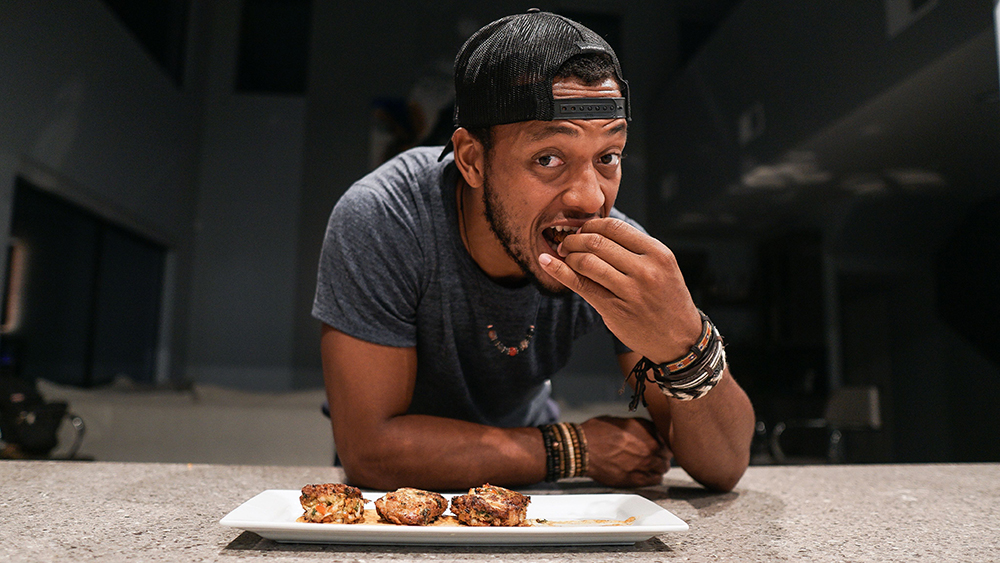 When Brett Hundley went away to college as a highly touted quarterback for UCLA, he had the same experience as many other students on campus: He missed home cooking. His parents’ house, in Chandler, Arizona, had always been open to friends and family, and his father’s grilled chicken, three-bean soup, oxtails and more helped ensure a steady stream of visitors.

“A lot of the times it was soul food, and it wasn’t cooking just to feed people. It was about having people around, having conversations,” Hundley says. “I went to college and there was none of that.”

Hundley took matters into his own hands, venturing home on the weekends to watch his dad in the kitchen, writing down recipes and bringing them back to Westwood. Then he’d gather friends and teammates for a big meal, just like back home.

That love of cooking remained even as he adapted to the highly regimented career of an NFL quarterback, including stints with Green Bay and Seattle and, most recently, as Kyler Murray’s backup for the Arizona Cardinals. He launched his #MenWhoCook series on YouTube and Instagram, sharing favorite recipes like oysters Rockefeller and corn-bread crab cakes and encouraging other guys to join him in the kitchen. “There can be a stereotype about who cooks in a household,” Hundley says, “and I’m here to throw it all off.” Here, the QB talks about what it’s like balancing a gourmand’s sensibility with the rigors of one of the world’s most punishing sports. (The conversation has been edited for length and clarity.)

How did #MenWhoCook get started?
Every time I’d post about food or cooking on Instagram, I’d get so many reactions. When people came over, I’d tell them it was the men in my family who cooked. That’s how I came up with the name. It’s been a natural progression from there.

What do you want viewers to get out of it?
I want people to see me outside of football. And when they see my energy and passion for cooking and food, it allows them to go ahead and do the same—with food or whatever their passions are.

The NFL is known for strict routine. Does what you eat become part of that?
It really does. In the off-season you get to have a great time and sort of relax, but once you snap back into that training, you go back to that regimented mentality.

What’s a typical day of eating like during the season?
Midweek practice is usually the longest, so I’ll wake up and have some sea moss [a variety of seaweed known for its nutrient density]. I have a spoonful with water and then head to the facility. There they make me an omelet— all vegetables inside, no cheese—which I top with avocado and douse with salsa.

For lunch they switch it up, but it’s usually a lean protein like chicken or fish. Then I drink a smoothie to get the vegetables out of the way. It’s a light and efficient lunch.

Do teams help plan what you eat so you get the most out of your training?
They really leave it up to the players. The team nutritionist will help you out, but after a few years in, I know how my body reacts and what it needs.

Is it tough not to indulge?
At first that balance was really difficult, because I used to eat anything and everything. It’s ridiculous to think what I used to eat when I was younger. I remember going to school, stopping at the Circle K every day to get a strawberry-shortcake ice cream, and I’d perform great. I’d eat two Jack in the Box tacos before practice. If I did that now I’d probably pass out.

Now it’s about portion control. If I want to eat something, cool, I might eat it, but I don’t need to eat the whole thing. I’ll have a few bites of cheesecake and let it sit. That’s probably the biggest learning curve, especially being an athlete and getting older. I wouldn’t say 27 is old, but 21 and 27 are completely different ages when [it comes to] eating.

Do you ever reach out to other players to see what they’re doing in terms of nutrition?
Oh, yeah, I’ve talked to a lot. DeAndre Hopkins is vegan throughout the season. Russell Wilson has a personal chef and nutritionist. There’s Tom Brady with his TB12 method [a strict diet that eschews nightshades, trans fats, gluten and more], whereas Aaron Rodgers is completely different. He just eats what he feels, and if he’s hungry, he eats. Same with Drew Brees.

Do you get any cheat days during the season?
For sure. On Mondays or Tuesdays I’ll have guys over. I’ve been cooking Italian food of late, like my homemade Alfredo, or grilling up chicken.

It sounds like the off-season is when you’re really able to get out and try new stuff.
When I travel, I always want to try new dishes, because there’s more than just the food. There’s everything that comes with it—the culture, the passion, everything.

What I’ve started doing when I go to new countries, like Bali or Italy, I take cooking classes. In Colombia, it wasn’t really a cooking class—I went into the back of the hotel and started talking to the chefs, and it turned into one. They taught me about how they cook plantains there, how it’s different than in Jamaica. I really want to go to culinary school. Not because I want to be a chef, but because I want to expand my food knowledge. My goal is to just keep learning.