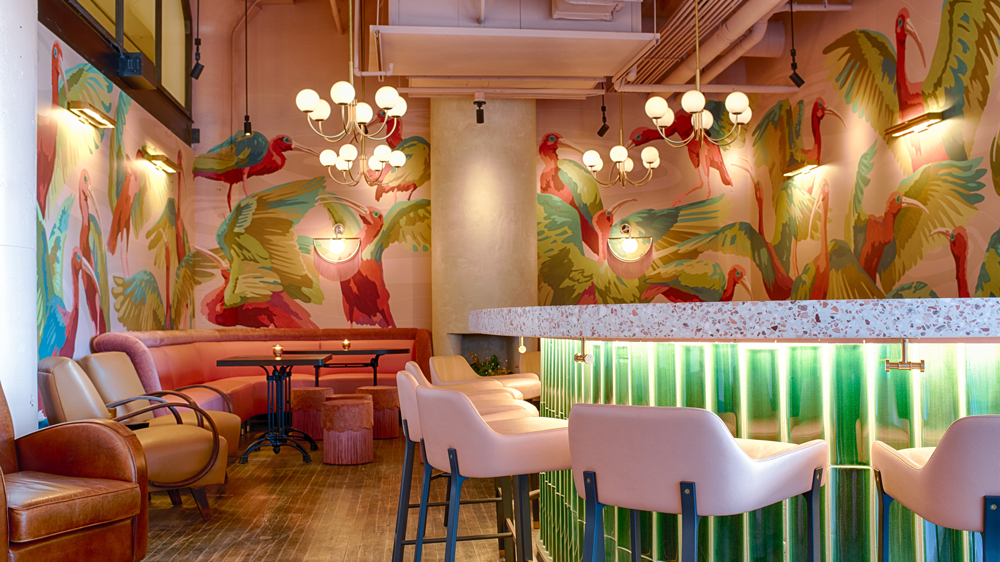 When you dine at Atrium, owner Tal Baum wants you to feel transported. Where you’re transported to doesn’t matter. The restaurant opened on the ground floor of Ponce City Market at the end of January, bringing a lush enclave to the otherwise chaotic market. “I think after the last two years, we are all looking for something, especially when we are going out, an experience that will feel different, an experience that will make us forget the hustle and bustle of today, and just put a smile on our face. And that was the intention,” Baum says.

Baum is no stranger to Ponce City Market—her first restaurant, the Northern Italian-focused Bellina Alimentari, opened on the other side of the market in 2015. When the opportunity presented itself to take over the space formerly occupied by Jonathan Waxman’s Brezza Cucina, she knew she had to have it.

The industrial and minimalist space was transformed into the vibrant locale it is now by Smith Hanes Studio. It starts in the 1,200-square-foot parlor where the bar and lounge seating is located. Pink is the prevailing color here—pink banquettes, poufs and walls—but a jaw dropping mural of multi-colored herons painted by Savannah-based artist Kipper Millsap pops against the rosy hue. “He just came with this blue heron sketch that we all fell in love with and just decided that that’s what we want to do. It feels so free and liberating and exciting that the whole process was really natural,” says Baum.

The centerpiece of the parlor is an emerald green bar made of handcrafted tiles by Atlanta ceramicist Charlotte Smith. The 4,200-square-foot dining room takes a deeper dive into Wonderland where the once white interior is now painted a soft sage and filled with curved banquettes in jewel tones. Drapes with a palm frond motif line the windows that previously peeked into neighboring Williams-Sonoma and the market. It’s hard not to look up, though, at the floral arrangements created by floral studio Pinker Times. The large suspending arrangements made of dried foliage riff on the tropical aesthetic with pink grass and Spanish moss. “We wanted to create a space that is whimsical and changing and magical, and carry you into our journey and provide you with that experience that is fun and engaging and different,” Baum says.

When it came to planning the menu, Baum and her culinary team—executive culinary director Brandon Hughes, culinary director Todd Immel and the restaurant’s executive chef Cole Pate—didn’t want to adhere to just one type of cuisine. Her other restaurants focus on Israeli and Italian, but here, there are no boundaries, says Baum. “It’s foods that we enjoy eating. It is food that we enjoy that is comforting yet seasonal and light, and just makes you feel good,” she says.

Here, the fare is more broadly European. One of her personal favorite items is the chicken. “It’s such a different approach to serve chicken in a restaurant because how exciting can chicken be?” she laughs. “But we make chicken sausage and stuff it into the breast and then we sous vide it and sear it right before service.” It’s served with a smoked potato puree, mashed potatoes, celery and jus. The duck-stuffed agnolotti is another popular dish as is the crudo section, which Baum thinks is ideal for people who come in just for drinks.

Speaking of drinks, the parlor has its own menu with 25 drinks found only in that section. Concocted by beverage director Demario Wallace, the drink list includes a variety of punches, seasonal drinks, classics and zero-proof options. Standouts here include the matcha colada with rum, matcha, coconut, pineapple and lime as well as the table-side martini.

Before Baum was the owner of a burgeoning restaurant empire, she was an architect and this project allowed her to reconnect with those roots. “It’s in me more than I realize it is. It’s part of what I’m passionate about and it definitely is reflected in our approach towards the construction phase and attention to details,” says Baum. “Providing an experience, a whole experience, it’s not just about the food, it’s not just about the decor. Everything has to be perfect.”