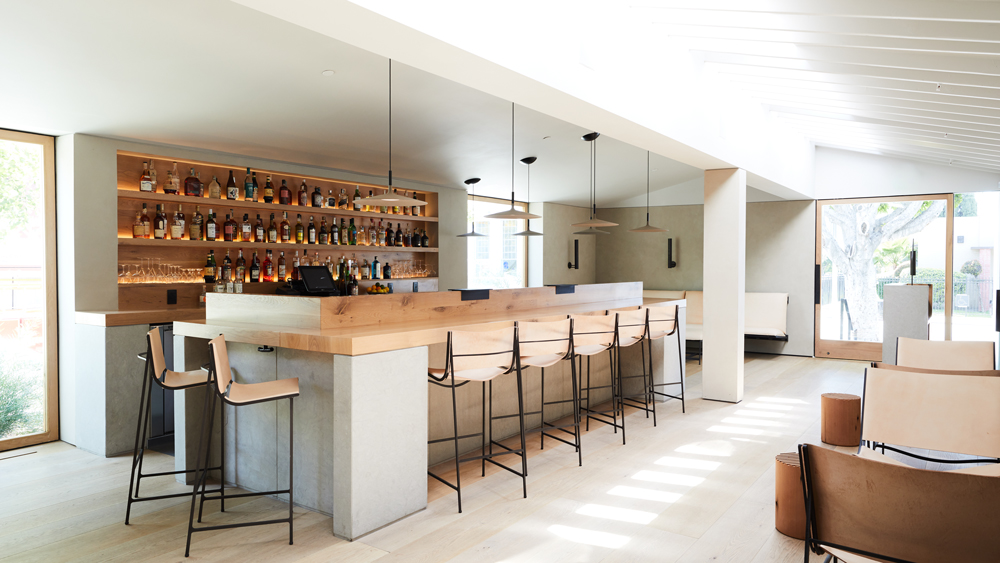 There was a calm to chef Eric Bost as he walked through his new restaurant Auburn in Los Angeles, despite the fact in just a few hours, he’d be opening the doors for the first time ever. Only adding to the pressure, when those doors opened, he’d take the helm of his own restaurant. So jitters should be expected. But there were none to be found here.

Serenity pervades all of Auburn—and that’s by design. The white oak, the pale vegetable-tanned leather, skylights, and ample greenery, create a calming effect upon arriving, like you’ve walked into a stylish friend’s home or a high-end day spa. “Even the plating of dishes should come off as organic and smooth, and kind of effortless,” Bost says. But don’t be mistaken by the easygoing aesthetics—Auburn has Michelin-star ambitions and a kitchen with the pedigree to get them.

Bost grew up in North Carolina, running around the back of his grandparents’ restaurants. As he grew up, he felt the urge to leave the state, but not his family vocation. He embarked on culinary school in New York where French cuisine became his north star. “As an American cook, I always thought I needed to be in France,” Bost says. “To be part of a larger brigade, to have better quality product, and because of France’s technique, history, and impact on the world of gastronomy.”

He took the leap and moved to Paris. “I went through the [Michelin] Guide, and I just had to cold call all the three-star chefs I could find,” he says. Unfortunately, he didn’t really speak the language. “I learned French by mapping out my introduction on the phone. So, ‘Hello, my name is Eric, I’m an American, but I want to work for you.'” He heard a lot of noes—which only prompted him to learn more French, so he could try to talk them out of it.

Eventually, he landed a stage inside Alain Ducasse au Plaza Athénée for four months, and then traveled around working for other Michelin-starred restaurants. After three years, he returned stateside, to work for Guy Savoy’s new Las Vegas restaurant. He kept moving up the team and organization, opening Savoy’s outpost in Singapore. But his sojourns through French kitchens continued, when he moved to LA to work at the much lauded République.

Now, as Bost sets out on his own, he’s grounded in technique he learned in French kitchens, albeit without cooking French food. There’s a stripped-down simplicity to the cuisine and décor of Auburn that has hints of new Nordic and northern Europe and even nods to Japan. And his tireless attention to product and vegetable-forward cooking is very much modern California cuisine.

His approach could be best summed up by the cheese course. “We do one per day, so there’s no cheese cart. There aren’t 15 kinds,” he says. “I think it’s best to do one cheese that is perfectly mature, the proper temperature.” If he were to serve, for example, an aged cow’s milk cheese from Salers, he may take some local quince, cook it sous vide to soften it up, bake it in a salt crust over the hearth to give it hints of smoke and salt, and then serve it with housemade bread. The dish would arrive, not looking flashy or filled with tricks, but the best way he knows how to serve that particular cheese. “All we really need to do is make sure that we’re presenting someone’s craft in the best way.”

And yet, while Auburn is grounded in California, this place feels very different than what is opening up across the thriving food scene of Los Angeles. This isn’t a raucous, shared-plate restaurant filled with umami bombs. It’s a little more reserved and not a la carte. At dinner, the menu is prix fixe, with options for four, six, and nine courses. Diners will still choose their own adventure—selecting among courses like duck with sprouted rye and black garlic, or scallop with chanterelles, and English peas with Santa Barbara sea urchin—yet the format makes for a more structured and formal affair.

Despite that, he’s not emulating the stuffy grand palaces of dining that Michelin has loved for so long. One, because it’s not his style, and two, because that’s not LA’s style either. “Those restaurants were too starchy and white, and everyone felt like with that came along the guy in the bow tie and the penguin suit in the back, and everything was like untouchable, and you would succumb to all the rules,” Bost says. “LA doesn’t want to wear jackets. We want to wear a T-shirt.”