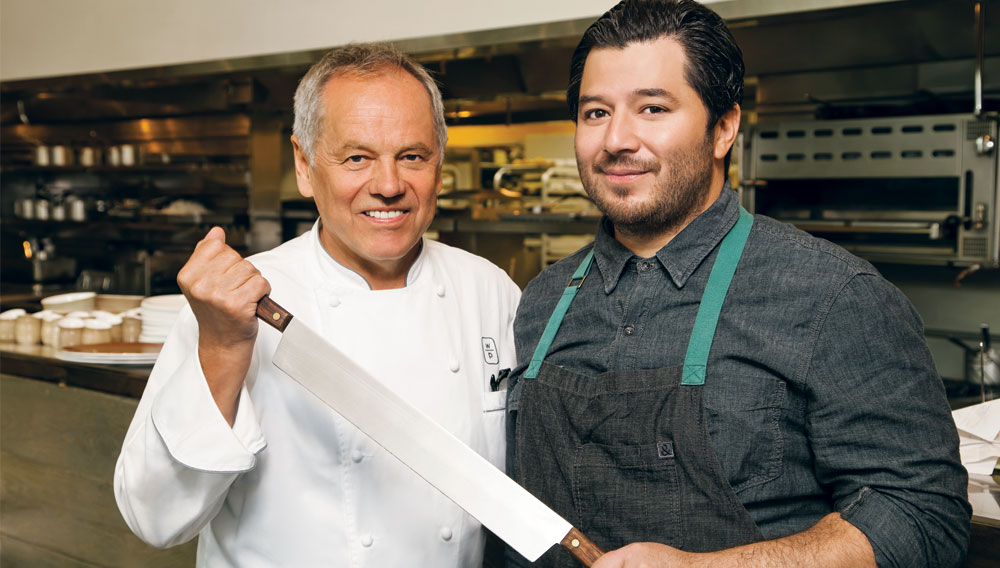 When Wolfgang Puck walked into Orsa & Winston—Josef Centeno’s diminutive restaurant in downtown Los Angeles—he found something familiar at the heart of it. “I saw, oh my god, they have a pizza oven like every other restaurant,” he recalls. “Then Josef comes out and says he got it from my little restaurant on Sixth Street.”

The oven makes a good symbol for two chefs who, 30 years apart, arrived in Los Angeles steeped in classical French training, only to turn the conventions inside out and invent a new style of dining in Los Angeles and beyond. Puck—the celebrity chef with 24 fine-dining restaurants around the globe, including Spago, Cut, Chinois on Main, and Postrio—came to prominence in 1982, after he broke from Patrick Terrail, his partner at Ma Maison, and opened Spago on the Sunset Strip. He thrilled both food lovers and Hollywood power players with a creative fusion of French, Italian, and Asian cuisines served in a liberating, casual atmosphere. The open kitchen? Puck practically invented it, as well as many of the tenets of what would become California cuisine. He put pizza (and pizza ovens) in a high-end restaurant, sourced produce directly from the farm, and famously became a regular presence in the dining room. The excitement over this new genre of fine dining energized the food scene for decades, and Puck has never stopped rethinking it, moving Spago to a more formal stretch of Beverly Hills in 1997 and then redesigning its menu and interior in 2012.

Centeno arrived in Los Angeles in 2006, having worked in New York under Jean-Jacques Rachou at La Côte Basque and Christian Delouvrier at Les Célébrités, and under David Kinch at Manresa in Los Gatos, Calif. In 2011 he left the popular Lazy Ox Canteen in downtown Los Angeles to open his own inventively casual restaurant, Bäco Mercat, which became the start of a small empire downtown: In a short time, he opened Bar Amá—his homage to Tex-Mex cooking—and Orsa & Winston, all within the same block or so. Like Puck’s smoked-salmon pizza, Centeno’s breakthrough dish was an irresistible cross-cultural mash-up: an epic sandwich he christened the bäco, made of flatbread filled with pork belly, a Catalan sauce called salbitxada, and all manner of surprises. But Orsa & Winston is where Centeno best expresses the nuances of his talent, with a menu he calls “Japanese-Italian omakase” served in a style being hailed as yet another reinvention of fine dining.

“It was really an incredible connection that he got some of our old equipment,” Puck says. “And then he told me he built the restaurant himself for almost nothing. So it’s good when you start out that you start with bare bones, but what is not bare bones is what’s on the plate, and that to me is the most important part.”

Wolfgang Puck: I wanted to pick someone from L.A., because we have so much, but nationally, we often look like a second-slot city. It’s New York, Chicago, San Francisco, and then, OK, L.A. But more trends started here than anywhere else—going back to the ’80s, when I opened Spago and Chinois, and Nobu opened Matsuhisa, and Nancy [Silverton] opened La Brea Bakery. Now we have a whole new wave of chefs, like you, and the chefs from Animal, and Roy Choi, who are doing something different. And I think you are doing the best food of these new-style restaurants.

This new style—it’s much less formal, but what is formal is the food. At Orsa & Winston, you are using a different approach, different ingredients, different parts of the animal. It’s a restaurant where the restaurant is an adventure. Also, you have to eat a full tasting menu, so it’s really an event—eventful gastronomy. It’s an event to go downtown; it’s an event to eat this whole new experience, which really represents this whole individual. It’s really very personalized—and very easygoing, too.

Josef Centeno: The night you came in, I was petrified—I couldn’t believe you were in the restaurant! But everything you say completely rings true as far as the pioneers and my generation of chefs. You broke the mold that food had to be Italian, or French, or solely a single cuisine. It took a while for people to come around, but when it hit, it really hit. And I think L.A. is really an open canvas for chefs. I was trained in New York and San Francisco . . .

WP: You can see that in your technique. That formal training, it means you can see it this way, and then you can make it this way. And the tasting menu: I thought the way you put the menu together, it made total sense— and sense to spend the money. In a lot of other hip downtown places, the price and the quality are out of sync.

JC: We had sayori, the Japanese needlefish, that night. It’s really hard to get. So I just filleted it in a little olive oil and kumquats; it’s a very clean, savory fish. Before I had only served it roasted or grilled. Doing something on the fly prompted me to just start serving it as filets.

JC: So I wrote the menu right then and there. I didn’t want her to feel like she had a completely different menu. I had to manipulate it a little so it would have flow. That’s the reason we don’t list dishes on the menu.

WP: But every restaurant has dishes that are staples. We actually don’t want to. We actually wish no one would order a smoked-salmon pizza. Having to make these dishes gets boring after a while. You’re young, but  . . .

JC: Oh, I get tired of making bäcos. And if I change the original one, people ask what did I do different. And I can’t deal with that. You deal with customers much better than I do. I don’t even go into the dining room.

WP: I didn’t either when I started out. But it’s important for me and also for the customer. I feel the restaurant is my home. So if someone comes to my home, I would greet them. And on top of it, they are paying to come, so they expect a good welcome. And what better welcome can you get than from the owner of the place?

JC: It’s very difficult for me. And I don’t know if people really want to chat. There are so many restaurants, and I don’t really do any TV stuff.

WP: That’s what I like. This is a guy who is really serious about his craft. He’s not on every television show trying to be the winner of the television show. A lot of young people today forget about building a great foundation. So many of them just don’t know how to cook.

JC: Iron Chef, Top Chef—for me, every night is a live performance. Hopefully we make everybody happy.

WP: In old times, we didn’t have many chefs on TV. Paul Prudhomme was one of the only ones, and now, no one talks about Cajun food. Now maybe some young guy like you will make it in a different way—a better presentation, still strong flavors.

JC: Bar Amá is inspired by my great-grandmother Amá. I grew up in Texas, and it’s my version of Tex-Mex food. By nature, I don’t think it’s very good, but it’s about the memories of that food, and sometimes the memories are better than the reality.

JC: So I take those memories and use my years of cooking and technique to do our take on those traditional dishes. I think my palate is very cross-cultural because I’m Mexican-Spanish-German-French-Irish-Polish-English. I’ve always liked robust flavors, and I never liked eating only one type of food.

In cooking, you have to become so consistent, but at the same time, you’re always pushing forward. There are so many different cuisines, so many different ingredients and different techniques from all over the world that you’ll never in a lifetime expose yourself to all of it. But the little bits and pieces you put together—if you can somehow integrate them so that it feels like the ingredients are supposed to be together, even though they’re from different parts of the world, that’s what I strive for.

“My wife started an orphanage in Africa before I really met her,” Wolfgang Puck says. “They started with 21 kids. Now there are 700 kids, and it’s a school, plus a vocational school. And I’m almost crazy enough to build a cooking school.”

Puck is speaking with obvious pride about the Dream for Future Africa Foundation, which he has chosen as his beneficiary for this year’s Robb Report Culinary Masters Competition. His wife, Gelila Assefa Puck, began working with children’s groups in her native Ethiopia in 1998, when she helped start a school for orphans with the Ethiopian Children’s Fund. In 2010 she established Dream for Future Africa Foundation, a charity that assists orphans in Ethiopia by providing a diverse variety of vocational training programs.

In 2011, Gelila, Wolfgang, and their two sons attended the ground breaking for the vocational school, which was funded by a $500,000 grant from the Annenberg Foundation and by contributions from the Steve Tisch Foundation and General Motors. Two years later, the DFFAF Vocational Training Center opened in the village of Aleltu, 55 miles from Addis Ababa, offering one- to three-year diploma and certificate programs in a wide variety of disciplines ranging from information technology to traditional Ethiopian textiles and weaving. The school also offers hospitality and tourism programs, a nursing curriculum, and an entrepreneurship program that introduces students to the fashion world, which connects to Assefa Puck’s background as a fashion designer. As Dream for Future Africa expands, the hope is that it will be replicated across Ethiopia and the rest of Africa.

“It’s really an amazing thing,” Puck says. And now that Puck has opened a restaurant a short flight away in Dubai, he expects the family will visit the school every year.