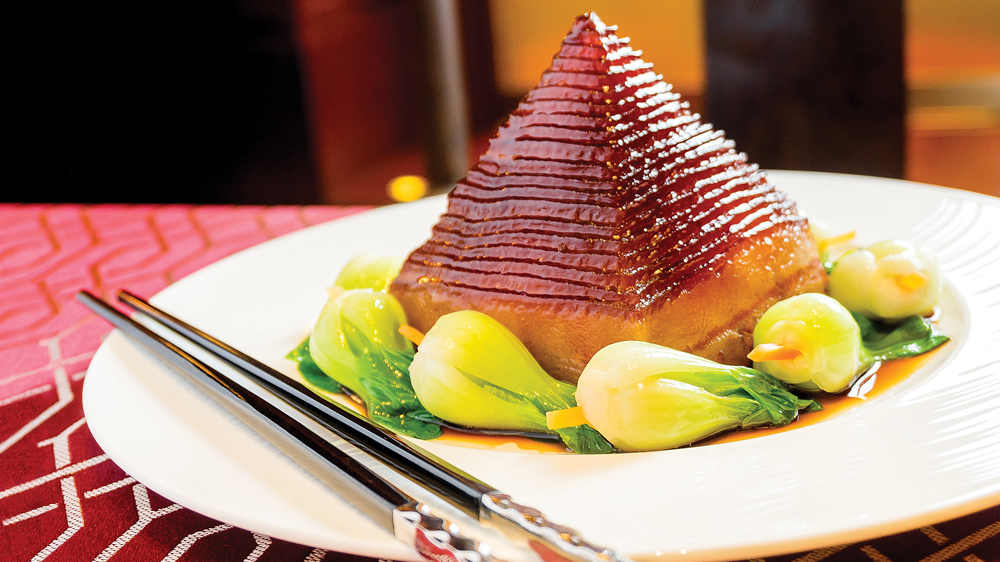 Caribbean resorts used to get by with a few culinary basics. As long as they battered some conch, fried up a few plantains, and kept the corn syrup–filled mojitos flowing, guests were happy—or at least they pretended to be. Those dark ages of dining, thankfully, are over.

With meals a centerpiece of the food-savvy traveler’s vacation, resorts have realized that they need to set the hook with more than the generic beach-spa-pool combo. A serious Instagrammable dining adventure is a must. And no island retreat understands that better than the Bahamas’ Paradise Island.

Atlantis, the island’s original resort, helped launch the sun-and-sand dining revolution with a few culinary celebrities, including a Nobu and a Fish by José Andrés. But it wasn’t until the multimillion-dollar behemoth Baha Mar development finally started rolling out in 2017 that the Bahamanian property emerged as the template for every future food-forward mega resort.

Everything, including the food offerings, is supersized at Baha Mar. The property sits on 3,000 square feet of white-sand Cable Beach. There are 10 pools, a sprawling spa, and three distinct hotels, all clustered together on one property. Rosewood is the posh one, Grand Hyatt is the family-friendly one, and SLS is the clubby one. But none of the hotels’ kitchens is exclusive, and together they add up to a curated collection of 40 and counting unique restaurants, lounges, and bars designed to turn the beach vacation into a global culinary showcase.

Trying to take a bite out of a buffet this epic is impossible, so it’s best to edit the list down as soon as you arrive. Start at Shuang Ba, where the glam dining room is anchored by a 30,000-pound double-dragon stone pillar and the kitchen is crowded with 15 chefs recruited from every corner of China. That means they are plating faithful renditions of regional specialties, including a range of legitimately spicy Szechuan chili-boiled dishes. An extensive menu of distilled Chinese spirits only adds to the restaurant’s zealous authenticity.

Stay in an Asian fugue state and open the menu at Katsuya, which, like several of the Baha Mar restaurants, is part of an upscale global chain. The dining room—designed by Philippe Starck in his classic minimal-with-an-edge style—sits just off the Grand Hyatt casino floor, so you can nearly throw the dice from your table. But the best feature may be the central sushi counter, where the chefs plate Katsuya Uechi’s renditions of sashimi and maki.

Want more? The wood-burning oven at chef Danny Elmaleh’s Cleo turns out a crisp flatbread studded with plump artichokes, and the 3 Tides Fish House, all aquatic blue and white, proves Baha Mar can handle down-home Bahamian cuisine, too. Its signature seafood tower, assembled at an open raw bar, is a mountainous stack of the locally sourced daily catch. Stix Noodle Bar serves hand-pulled noodles, and the T2 cigar bar offers the island trinity: Caribbean rums, cigars, and Bahamian drummers. Finally, for anyone nostalgic for the old-school resort buffet, there is the Regatta food hall—but don’t expect standard-issue surf and turf. When even the resort smorgasbord features slow-roasted pork belly, you know you’ve come to the reimagined Caribbean, a place where the beach itself may just look like a distraction between meals.