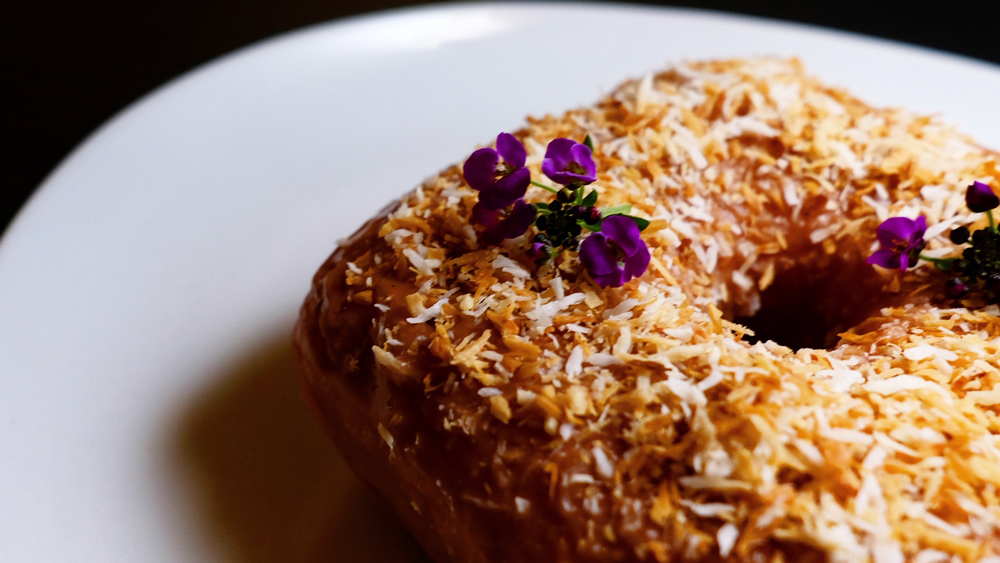 A few weeks ago, Paola Velez, the pastry chef at Washington, DC’s Kith/Kin, wasn’t in a great place. “I was at home moping, sad and furloughed because of Covid,” says the James Beard Award finalist for Rising Star Chef. But then a friend and restaurateur gave her a call and an idea: What if she baked something for a good cause? Velez created Doña Dona, a donut pop-up that donated to Ayuda, an organization that provides aid to vulnerable immigrant communities. “There are undocumented workers here that need help,” Velez says. “They can’t apply for unemployment, they can’t get a stimulus check, so let’s do something about that, let’s help.” The pop-up was a hit, selling out all three dates in May.

Willa Pelini, the pastry chef at Emilie’s in DC took notice. “I thought it was a really awesome idea, and she did every part of it so well that it was really inspiring,” Pelini says. In the wake of police officer Derek Chauvin killing George Floyd and the subsequent Black Lives Matter protests, the Minneapolis native Pelini felt compelled to support the protesters’ efforts. “I’ve wanted to attend, but I’m working full-time, and I didn’t want to expose my coworkers to disease,” she says. “I wanted to take these feelings and channel [them] into something productive.” So Pelini reached out to Velez to work on a bake sale together, with proceeds going to organizations that promote racial justice.

After adding to the mix fellow DC chef Rob Rubba—who has been running the Scrappy’s Bagel Bar pop-up during the Covid-19 shutdown—the trio set about planning Bakers Against Racism. In the process they decided to up their ambitions. It wouldn’t be just a local bake sale; they’d open it up to pastry chefs and home bakers outside of DC who could support Black Lives Matter chapters across the country. “If coronavirus wasn’t a thing, and we were all able to be in the same building all at the same time, we wouldn’t have thought to have people in other states do it,” Pelini says. “But because we have this limitation it actually opens it up—if we can’t do it together, then anyone can do it anywhere.”

“If we would have done just DC, it would have been great,” Rubba says. “But by opening it up, now even home bakers are getting involved and using this as a resource to add to the proceeds.”

CALLING ALL BAKERS, CHEFS, HOME BAKERS & COOKS!!!!!!!!! @bakersagainstracism is a call to action: to fight and stand up against the unjust treatment of BLACK people in the United States. We are armed to fight racism with the tools we know how to utilize, our FOOD. JOIN forces with us virtually on all social media platforms launching pre-sales on June 15th and pickups on the 20th to stand up to injustice. We are asking for national participation! You only have to donate 150pcs of a dessert to sell, and then donate the majority of the proceeds to a charity that supports black lives. Your small contribution can create BIG and lasting change. For graphics, documents and resources email us at bakersagainstracism@gmail.com *Art by Chef @robrubba * #jointhemovement #blacklivesmatter #BAKERSAGAINSTRACISM

Rubba designed some graphics, and they all sketched out the plan. The will each offer 150 baked goods—from Rubba’s grandmother’s zucchini bread recipe to Pelini’s sundaes to Velez’s passion fruit and strawberry buckle cake. On Monday, June 15, the presale begins, and buyers can pick up on the 20th. The following day, they’ll post on Instagram how much they’re donating to the charity of their choice.

With the basic framework of the sale set, they created a resource page so people interested in participating could find information on where they could donate, promotional graphics and text, and even a guide for home bakers on how to scale up. Then they started spreading the word—and it spread fast.

“I thought, ‘All we need is 80 people,'” Velez says with a laugh. “We were excited for that, and then all of a sudden it was 80, 100, 1,000, and now it’s 1,659. And people are forming coalitions—now there’s a Richmond Bakers Against Racism.” The movement has gone international, with bakers in France, Germany, Singapore, Turkey and more signing on. And for those not signed on yet—including home bakers—they can go to the Bakers Against Racism resource page to join up. Pelini, Rubba and Pelez aren’t sure how much they’ll be able to raise, but they’re asking participants to help track donations in a Google spreadsheet so they can calculate the total impact.

“Food is something we use to maintain our bodies, and then to use it as a political tool to help others is powerful,” Velez says. “Baking is such an intimate way of cooking. You have to know your ingredients, you have to wait for things to happen, you have to trust that you’re doing it right.”