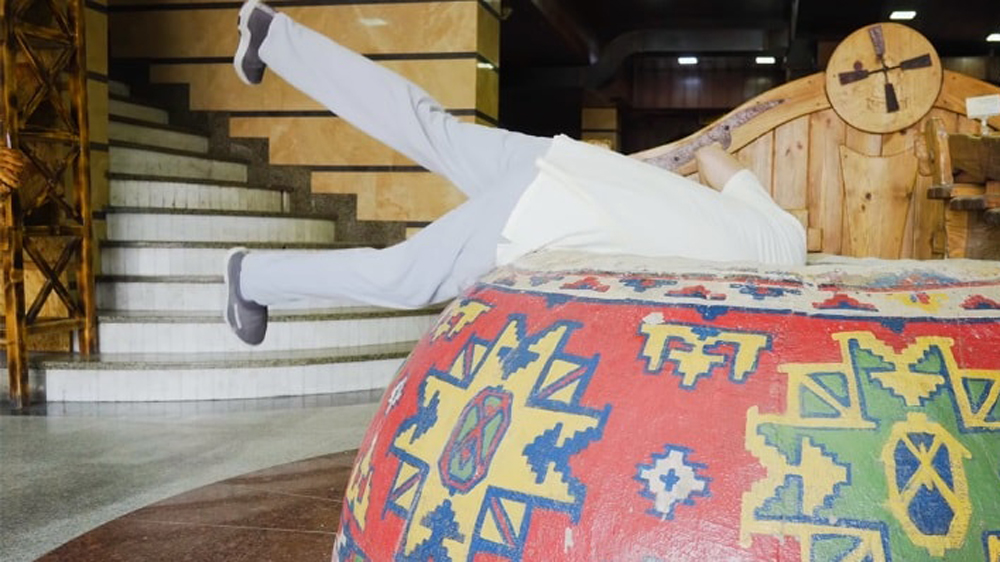 Around Asia and the Caucusus, for centuries the peoples of those regions have relied upon large clay ovens to cook all manner of food from breads to meats. Most people recognize the Northern India incarnation—the tandoor—in which foods like tandoori chicken and naan bread are made.

In Armenia, their version of this large clay oven is called a tonir and it represents more than just a cooking apparatus. Ancient Armenians worshipped the sun, and they crafted their tonir to look like a sun setting in to the ground, with a half-dome above the earth and the rest recessed into it. It became not only a way for them to prepare food, but a tribute to their deity.

Skhirtladze Davit, a Georgian who now lives in Aparan, Armenia, has been baking bread inside a tonir for 16 years. And when does, he puts on a show. If people are impressed by fishmongers throwing a big salmon across Pike Place Market in Seattle, they should check out Davit baking the traditional flatbread shotis puri. There’s much more at stake for him during his exploits in the name of food.

He cranks his tonir up to high and then preheats it for six to seven hours. When the oven is reaching temperatures between 750 and 900 degrees, the process begins. A salt-based liquid is applied to the walls to help impart flavor. Davit shapes a white flatbread dough over a dome-shaped mold. He then has to try to get the bread as close to the heat source as possible, so he grabs the lip of the oven, the dives halfway into tonir to slap the dough on the wall, then pulls himself out and does it again.

It’s not just stubborn tradition that’s keeping him making bread this way; he claims it’s necessary to bake it right. “When they started making tonirs in the olden days, they used clay to make them, and we still do the same thing today,” David says. “If something changes in the technique, the tonir won’t work right.”

When the bread is golden brown, he uses large hooks to pull the loaves from the oven and place them right on the rack to be purchased fresh. Fortunately, for him, his customers truly do savor the bread. It’s traditionally part of celebrations like Easter, weddings, and other holidays. We’re sure he’s happy to know his death-defying baked good isn’t merely the accompaniment to a Tuesday night microwave dinner.