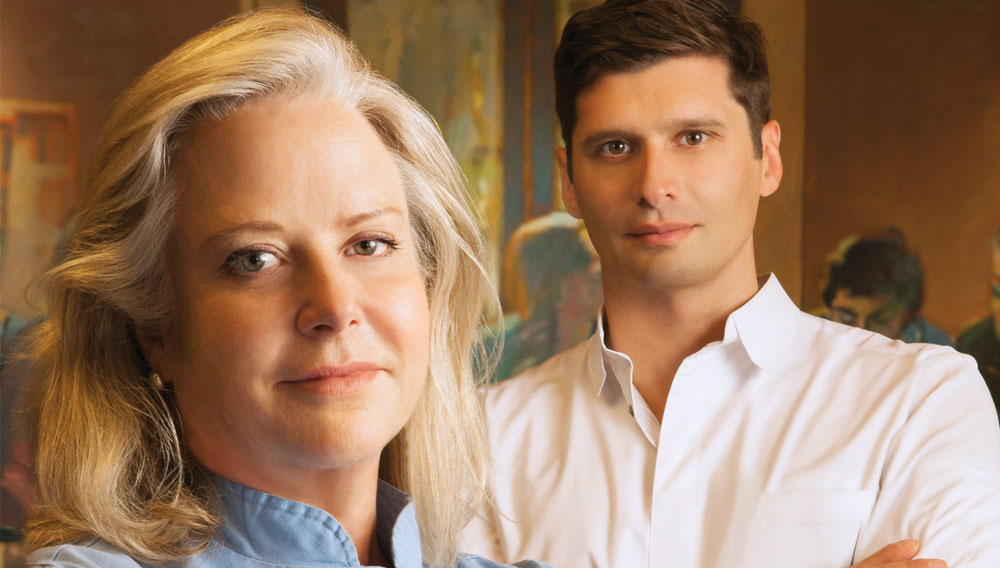 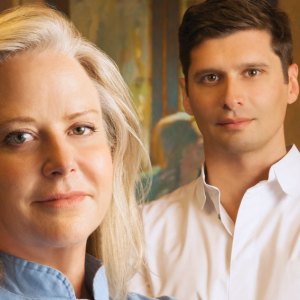 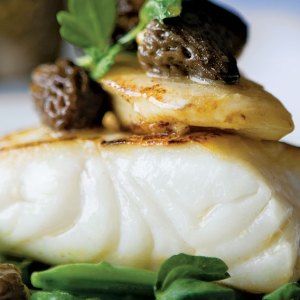 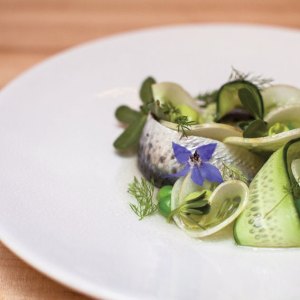 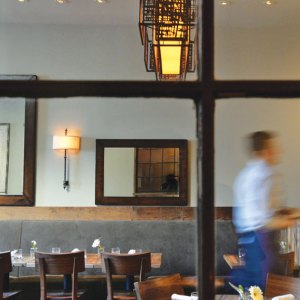 In Nicolas Delaroque, Nancy Oakes finds a chef who achieves the perfect poise between cutting-edge ideas and soulful French cooking.

When Nancy Oakes opened San Francisco’s L’Avenue in 1988, she was one of the first chefs to seriously reconsider American cuisine. Her plates were complex and well-integrated compositions whose side dishes took center stage. A grilled veal chop, for example, might have been topped with Italian-inspired salsa and accompanied by new potatoes sprinkled with sage and Parmesan and French beans tossed with lemon, olive oil, and roasted peppers. She closed L’Avenue to open Boulevard in 1993, a grander venue that has remained so relevant that in 2012 it was named Outstanding Restaurant in the United States by the James Beard Foundation. Four years ago, she opened Prospect, a breezier version of Boulevard.

Born in Massachusetts but raised in California, Oakes did not originally set out to be a cook. She had an aptitude for science and was accepted at Bennington College and Sarah Lawrence College, but she decided to go to art school instead, before finally falling into cooking at age 27. After opening L’Avenue, she experienced “a moment of unhappiness” and, questioning her decision to go into the restaurant business, sought counseling. After considering her personality and how she and her family approached food, her therapist offered an opinion that, for the restaurateur, was an epiphany. “She claimed I was a guided missile,” Oakes recalls, “and this was where I was always headed.”

In contrast, Nicolas Delaroque, 33, grew up near Paris, and his career was cemented at age 14, when French students are directed into trades. “I thought, I had to eat, so why not cook?” Delaroque recalls. His challenge was finding his own style. At age 23, he left France to work in Australia and Canada. He was a sous chef at the Fairmont Le Manoir Richelieu in Quebec when a friend told him that Dominique Crenn—who now runs the Michelin two-star Atelier Crenn in San Francisco—was opening Luce in the InterContinental San Francisco Hotel. He served there as chef de partie, then moved on to the casual Le Garage on the waterfront in Sausalito, Calif. Still exploring, he signed on with David Kinch at Manresa in Los Gatos, Calif., leaving after 18 months to finally establish his own restaurant, Nico, in San Francisco.

When Delaroque opened his new venue in November, most of the diners who walked through the doors had never heard his name. But his unique take on French food made this modern bistro in the Pacific Heights neighborhood an immediate sensation. The small, nightly menu is refined yet approachable, and Delaroque’s combinations always contain surprises: a salsify soup finished with a swirl of brown butter and coffee, for instance, or a black-cod brandade adorned with puffed rice, sunchokes, and nasturtium.

Oakes learned about Delaroque after reading a favorable review. Two visits to Nico made her a fan. And as it turns out, Delaroque is also an admirer of hers—for both her cooking and her longevity in the business.

NANCY OAKES: I think Nico exemplifies where food is heading. If you look at the pendulum of food, we went all molecular and then swung back to the all natural. Then there are some with a vision who can bring those together in a way that really captivates people. There is food as theater, and then there’s food that feeds your soul and makes you happy. Nico hits a very good balance between the two.

NICOLAS DELAROQUE: I’ve done both kinds. At Luce, I did a little more molecular and high end. Then when I went to Manresa, it was all about the farm and the quality of the products. I’ve worked at bistros like Le Garage, and I liked the warm atmosphere. I was torn between these types of restaurants, if that makes sense. At my restaurant, I don’t feel like I’m innovating anything. I’m cooking. I don’t really think I use new techniques.

NO: I’d differ with you. I think we could just talk about the way your food looks. The way you use refined presentations on rustic plates is very fresh and inviting. The way you cut vegetables is different from anything I’ve seen; so is the way you contrast textures. All of us start plating certain ways—right now, things are in a line. In the 80s, we were piling everything up. You are affected by everything you see and experience, and I think you’re wrong about innovating. Maybe it’s just part of your process—as you take things in, you change it.

ND: I’m French, and when I cook, I use who I am, where I came from, and where I grew up. The only thing that is different in San Francisco is the produce, because that’s influenced by where you are. If I was back in France, I’d be using what I learned in California, because I spent six years here, and it’s part of my experience.

NO: A term I hear a lot is “personal food,” and for a long time, I struggled with what that meant. But in a way, all of cooking is just that. Everything that you’ve become, everything that you studied, everything you worked for is constantly being admitted through you onto what we cook.

ND: I say a dish needs to talk to me. It needs to be something I experienced before. That’s how I start a creation. It can evolve with thinking—like I need to add something to it—but at the beginning it needs to come from me. Six years ago, when I came to San Francisco, I went to Boulevard, and that was one of the best restaurants I tried. It was just solid and fresh. I had a lot of respect for you. I could taste the experience behind it, and I could understand its popularity.

NO: I try to move Boulevard forward, although people have a certain expectation of the food. I understand that I’ve kind of attained the role of classic, but I would hope I’m not a monument. I’ve tried to keep it interesting for us. You know this, Nico: To keep staff you have to challenge yourself and learn all the time. At the same time, don’t you get sad when a classic—say, a Le Voltaire—changes and they start applying molecular techniques to what they do? Some things you don’t want to change.

NO: I love to learn all the techniques, and I make it my business to get those chemicals in and to experiment. Don’t you think there will be things that will become part of our traditions?

ND: It is a balance. You can use part of it to create something interesting, but don’t overuse it.

NO: I love to take balsamic and turn it into beads where you can eat it in a relish with, say, pine nuts. You experience it in such a different way; it brings in the flavor without the bleed all over the plate. You don’t really change the product, but you change the way you experience it. And then there are the techniques like foam. As much as everybody got foamed out, there’s something to be said for lightening those incredibly rich products and making it possible to eat those things, but not eat as much of them.

ND: True. In our generation, we love fat but not as much as we used to. We don’t want too much fat, to feel too full.

NO: But really, can you ever have too much aioli?

Family House: A Roof and Refuge

Nancy Oakes chose a San Francisco charity as the benefactor for the Robb Report Culinary Masters Competition: Family House, an organization that provides shelter for families with children who have life-threatening illnesses. This organization was a surprising choice for Oakes, who for more than a decade has been chairwoman of the Meals On Wheels of San Francisco gala. This year, the gala raised $2.6 million thanks to an auction, dinner, and tasting that featured more than 90 chefs Oakes wooed into cooking. But Oakes decided on Family House because of another personal connection.

Last year, her friends Ari and Dawnelise Rosen were jolted out of their daily routine when their 3-year-old daughter, Serafina, was diagnosed with leukemia. The Rosens, who own the popular Scopa and Campo Fina restaurants in Healdsburg, Calif., made weekly 70-mile trips to San Francisco for treatments. Dawnelise had to give up her position in the restaurant, creating yet another financial burden for the family. The Rosens were able to stay with family in San Francisco during those nine months, but they saw many others who were not as fortunate. “With everything we went through, I became interested in working with Family House,” Ari says. He held a charity dinner for the organization and enlisted the help of Oakes’s husband, Bruce Aidells, the guru of meat and sausage. Through this association and by talking to the Rosens, Oakes came to see how emotionally and financially crippling childhood illnesses can be.

“Making it possible for people to have a place to stay lifts a major burden,” she says. Most children in treatment at the UCSF Benioff Children’s Hospital are there for bone-marrow transplants, chemotherapy, and radiation, and they stay anywhere from one night to several months.

Family House, which opened in 1981 and is privately funded, currently operates two facilities close to the campus of the University of California, San Francisco. The 34 rooms can accommodate 107 people a night, and the facilities are usually full. Over the course of a year, Family House serves up to 2,000 families. Early next year, the UCSF Benioff Children’s Hospital will close its original site and relocate to a new facility in San Francisco’s Mission Bay area, so Family House is in the midst of a capital campaign to raise $40 million dollars to build an 80-room facility that will accommodate 250 people and provide not only shelter but also food and, in some cases, financial assistance. The new Family House facility is scheduled to open in 2016.

“Talking to the Rosens, I realized this could happen to any one of us,” Oakes says. “Family House provides a safe foundation for families when their entire world is turned upside down. It is their rock.”