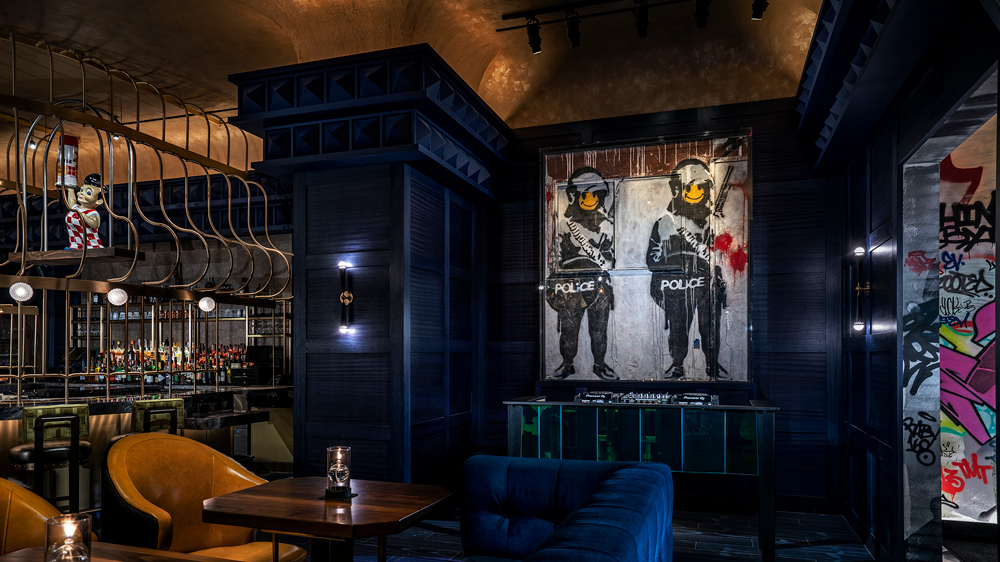 Tucked in a dark nook of Greene St. Kitchen, a spray-painted stencil of two riot cops with yellow smiley faces standing shoulder to shoulder hovers above a DJ booth. If this sounds like a Banksy knockoff, it isn’t. It’s the real thing, reports Andy Yang of Food and Wine. This restaurant, opening in early April inside an off-strip casino, would seem the unlikely location for the first permanent exhibition of Banksy’s work in Las Vegas, but inside the massive $690-million revitalization of the Palms it makes perfect sense.

The painting, “Smiley Coppers Panel I” (2002) comes from the expansive contemporary art collection of the Palms’ new owners Frank and Lorenzo Fertitta. The restaurant as a whole is an ode to street art, with original works from Kenny Scharf, Cleon Patterson, Martha Cooper, and more adorning walls throughout the space. Greene St. Kitchen is the latest chapter of the Fertitta brothers’ efforts to turn the Palms into a Vegas hotspot again.

It has been a while since the Palms really gave people an excuse to leave the Strip and head its way. That certainly wasn’t the case a little more than a decade ago. The Maloof family, who christened the casino in 2001, seemed to have their finger on the pulse of the culture of the early aughts. Nothing evokes the era better than reading the guest list for the Palms’ opening party. There was Dennis Rodman, Vince Neil in the afterglow of VH1 Behind the Music making us feel briefly nostalgic for hair metal, and Paris Hilton wearing a dress made from $1 million of casino chips.

Let’s just say it wasn’t the classiest time in American culture, and the Maloofs really leaned into it. The hotel had a Playboy Club on property, hosted the most salacious season of the Real World, and featured stripper poles in some of the suites. But also like that era, the Palms was built on overleveraged cash that faced a reckoning when the market crashed. Eventually the Maloofs had to get out. After a deal with a couple private equity firms, the family ownership shrunk to just 2 percent.

In the wake of the Fertitta brothers selling the Ultimate Fighting Championship to WME-IMG for $4 billion, they bought the Palms for $312.5 million in 2016. They’ve poured in more than twice that much since, with both art and restaurants as cornerstones in their efforts to attract a more sophisticated clientele.

Earlier this month they unveiled a $100,000-per-night suite designed by Damien Hirst and filled with new commissions that harken back to some of his most famous works. They’ve also convinced outstanding chefs to join up in the new Palms. Food Network star Michael Symon opened his Mabel’s BBQ, along with a beautiful little fine dining restaurant, Sara’s, hidden inside. And James Beard Award-winning chef Marc Vetri—someone who never wanted to open in Vegas—was convinced by the Fertittas to venture out from Philadelphia to create an exceptional Italian spot perched atop the 56th floor overlooking the glittering Strip in the distance.

From the art, to the design, to the food on offer, this all feels much more grown up than the Palms we used to know. See more photos of the restaurant below:

Next to the Banksy is a tunnel by NYC graffiti artist CES.  Photo: courtesy Clint Jenkins