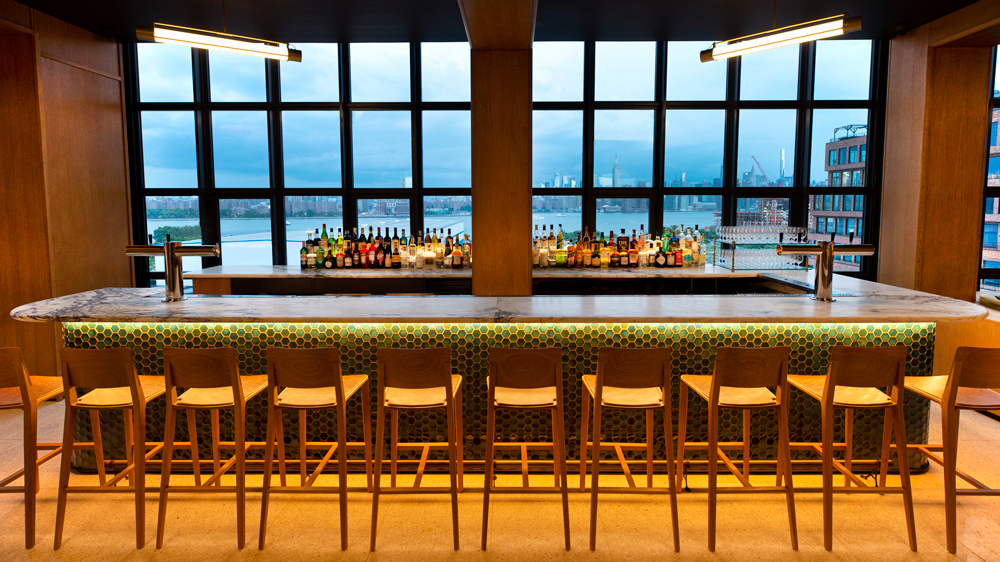 A generation after SoHo transformed from artists’ lofts to a neighborhood packed with big-name retail outlets and tourists, Williamsburg saw a similar evolution away from its roughhewn past into a hipster mecca and now a place where there’s an Apple Store, Hoxton Hotel and J. Crew. And while not everyone living there is sure to welcome the last decade’s new tenants in North Brooklyn, chefs Aidan O’Neal and Jake Leiber have made for excellent neighbors since arriving.

In 2019, the team behind the beloved Greenpoint French-Canadian-ish bistro Chez Ma Tante set up shop in Williamsburg, joining forces with restaurateur Joe Neidrich—who has launched spots including Acme and The Happiest Hour—to take up residence in the Wythe Hotel. Together they opened the hit Le Crocodile, which earned a stellar three-star rating from Pete Wells over at The Times.

The team is now at it again, this time on the sixth floor of the same building. At Le Crocodile, they created a French brasserie with a New York attitude; upstairs they’ve opened Bar Blondeau, their take on the Parisian wine bar that’s grown out of the City of Light’s Bistronomy movement, where expertly crafted food meets natural wine in an unpretentious space.

At Le Crocodile, O’Neal and Leiber serve up dishes like escargot with parsley, Pernod and fennel, venison steak tartare and roast chicken with herb jus and frites. At Bar Blondeau, it’s smaller plates, inspired by France, Spain and Portugal, with an emphasis on seafood. There’ll be swordfish with aubergine, almonds and raisins; lobster salad with basil and pesto, and oysters with apples and ginger. Le Crocodile’s sommelier Rafa García Febles also joins them to curate the wine program. The natural wines from around the world will include pét-nats, chillable reds, orange wines and more. Bar manager Sörine Anderson leads the cocktail program that includes four non-alcoholic options like the Old Fashioned made with the zero-proof spirit Ghia.

Perched on the hotel’s sixth floor, the project’s architects took full advantage of the Wythe’s outstanding views across the East River. They designed the restaurant so that most of the 70 seats are positioned in a way that lets diners peer out of the floor-to-ceiling windows to gander at the Manhattan skyline. That vista, combined with O’Neal and Leiber’s cooking, may mean the chefs won’t wear out their welcome in the neighborhood anytime soon.