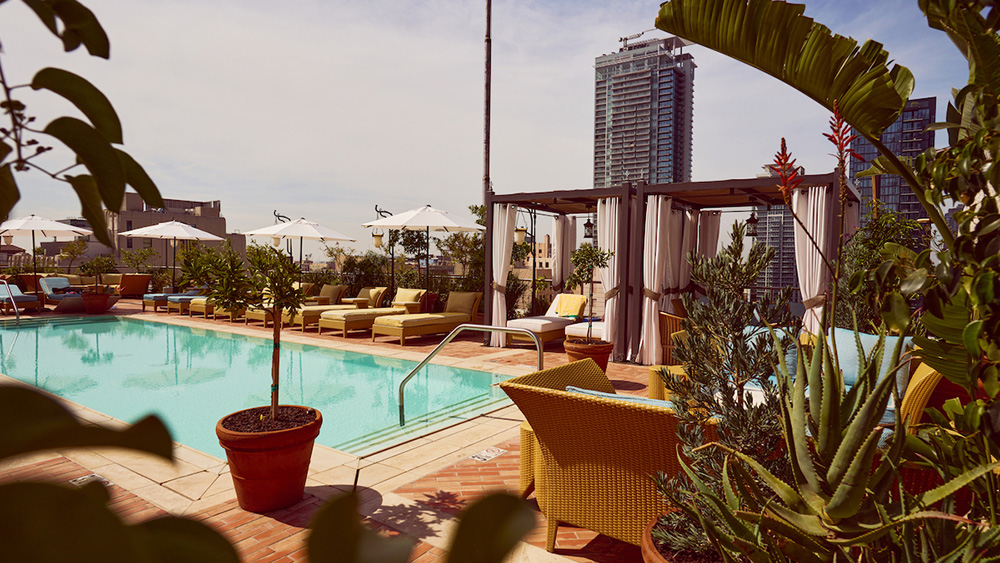 In the concrete jungle of Downtown Los Angeles, the new Bar Clara wants to offer an urban oasis.

The Mediterranean-inspired rooftop bar opened Thursday atop the Hotel Per La, which took over the old NoMad space at South Olive and Seventh Street, Eater LA reported this week. It’s the first opening at the hotel, which will also house a ground-floor restaurant, bar and lobby café in the near future.

At Bar Clara, you’ll be able to indulge in both food and drinks perfect for a summer rooftop sesh. The beverage menu, which is under the purview of the bar director Coleen Morton and the wine director Rick Arline, serves up an array of options, depending on your mood. In terms of cocktails, the Spritz Rainbow encompasses five different spritzes with ingredients that match their colorful names: Yellow, Orange, Pink, Red and Purple. And the wine list features a number of sustainable, natural and biodynamic glasses and bottles (this is LA after all …).

On the food side of things, executive chef Courtney Van Dyke has put together an extensive list of small plates and snacks, including the flaming-cheese dish saganaki and lamb sliders with marinated cucumbers and feta. If you’re looking for something a bit more filling, a salad such as the niçoise con pulpo or a main such as the herb-stuffed snapper might do the trick.

While the drinks, the food and the view should be tempting enough, the bar has some pretty good history behind it as well. Its name is an homage to Claire Giannini, the first woman to serve on the board of the Bank of Italy, which later became Bank of America. That inspiration might seem like it’s coming out of left field, but the Hotel Per La takes up what used to be the Bank of Italy building.

We’re guessing the rooftop bar will be a bit more inviting than a bank, though.

Click here to see all the photos of Bar Clara.