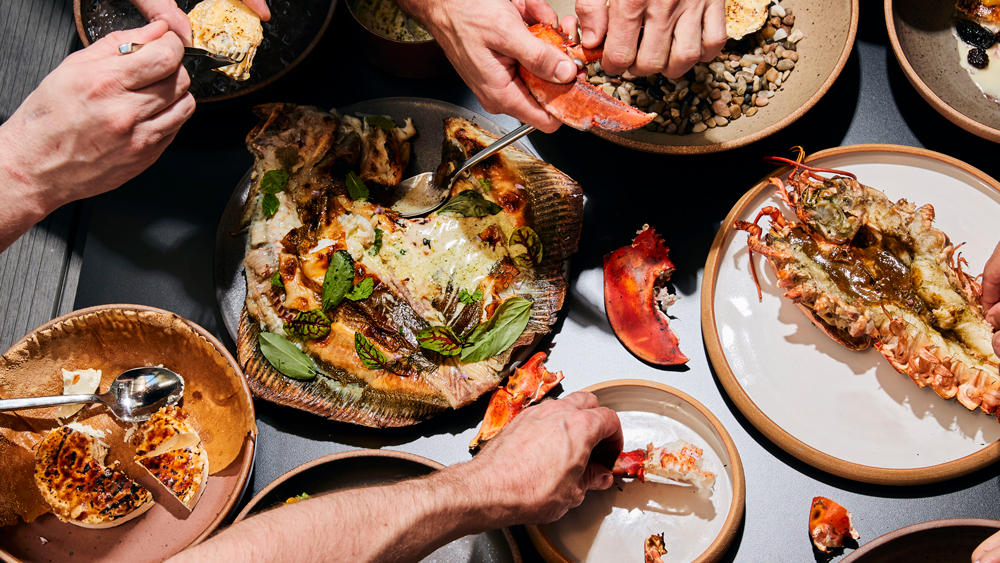 This spring, chef Johnny Spero was awarded a Michelin star for his tasting menu restaurant, Reverie, in Georgetown. As often happens after these things, reservations became scarce at the Scandinavian- and Japanese-inspired restaurant. And the timing was perfect—Spero was only weeks away from opening his second project, the highly anticipated Bar Spero in Washington, DC’s East End.

Bar Spero was going to be a departure from the three-hour-long intellectual experience at Reverie, though. Bar Spero was, well, a bar. Housed in a glass-encased, multi-story building, it was going to be lively and loud and bold, inspired by the cuisine of San Sebastian, much like Spero himself.

“It feels good to be able to tell more than just one side of my story,” Spero explained to Robb Report about Bar Spero in July. “Yes, we received a Michelin star and I do a tasting menu [at Reverie]. But I’m more than that. I don’t define myself by one style of cooking or experience and I need to be able to express myself in different ways.

“I need this just as much as I need the other [Reverie]. It completes me.”

Then, in mid-August, Reverie went up in flames. The cause of the fire was unknown.

“Most importantly, everyone is safe,” Spero posted on Instagram at the time. “The fire and smoke damage is extensive and we will have to completely rebuild. Although it will take time, we are confident that we will come back even stronger than before.”

Not only did he lose his newly Michelin-starred restaurant, his first solo project, but Spero also lost all of his personal belongings he kept there—his book collection, his knives, his recipe notebooks. And his wife, Alexis, was preparing to give birth to their third child. And there was still Bar Spero to think about.

“It’s a weird feeling sorting through the rubble and rebuilding one restaurant while bringing life to another,” Spero posted on Instagram in early September. “One can’t exist without the other.”

Yet one had to.

The outpouring of support was tremendous. Chef José Andrés welcomed the Reverie staff into the kitchen at Minibar, where Spero was the executive chef for years, so they could continue to work. Spero kept his head down and chin up, and on Sept. 14, after understandable delays, he opened Bar Spero in the Capitol Crossing development.

The opening could be called a triumph considering the circumstances, but it was always Spero’s vision to start fresh at Bar Spero. It is not an à la carte Reverie, although it is obviously from the same thoughtful and ambitious mind; it is a “dynamically different restaurant,” as Spero calls it, and it has been in the works since 2020.

The wood-fired, seafood-focused concept is inspired by Spero’s experience working at Mugaritz in Basque Country when he was in his late 20s. (The chef also spent time working at Noma.) On his one night off a week, he would trek downtown San Sebastian and eat steak and tomato salads and drink Pacharán (sloe berry liqueur) at high-energy “bars” until 3 am.

“Man, I’m smiling thinking about it now,” he said. “I want to bring that feeling, that emotional connection, in here. It’s less about a style of food; I’ll never say that I cook Spanish food. But that open fire cooking, that celebration of where you’re from and where you are, the liveliness of that … If you can’t laugh when you’re eating dinner, there’s something wrong.”

Bar Spero is experiential, stimulating, unexpected. The 120-seat restaurant has 25-foot ceilings and is built around a 26-seat bar that should be packed every night. The music is boisterous, the servers move quickly, the banquettes are close together and the plates are meant to be shared.

“We take our food seriously, but not so much ourselves,” Spero said. “When our guests see that we’re here to have a good time, they’re more likely to do the same.”

The menu highlights Mid-Atlantic seafood and produce from the same purveyors, farmers and fishermen who supplied Reverie. The raw bar will feature seasonal oysters, sea urchins, live scallops and mollusks cooked on the hearth and finished with lardo and cream. Other items with limited availability will pop up as well, like live spider crabs from Maine.

A whole grilled lobster is dissected and prepared in pieces. Even the roe is transformed into a butter sauce. A whole roasted Spanish turbot will be sauced with olive oil, garlic, chilies, kombu and herbs. Shenandoah Valley pork and steak will also be available at times.

His Basque cheesecake dessert is actually a playful optical illusion. He starts with Basque cheesecake, turns it into ice cream, encapsulates it inside a caramelized mousse, covers it in sugar, torches it, then slices it like a cake. He serves it on cooked dough that resembles a piece of burnt parchment, the same visual you would get if you ordered a piece of the real thing in Spain.

“When people walk out, I want it to be that thing that they can’t get out of their head. It just leaves you wanting more,” he said.

This was the same goal Spero had for Reverie, although the experience was very different. And the Michelin star? It did not make him second-guess where he was going with this. It made him confident that he was doing something right and unique, that he should trust his own unruly instincts.

Next, he rebuilds Reverie. Into something even better.

“Losing those physical items don’t matter that much,” he posted on Instagram about the fire. “The memories will always be there. Every single person who walked through that door has had a lasting imprint on that restaurant that can’t be taken away. It was hard seeing a shell of a space, demolished and dirty, but I’m looking at it as a blank slate to make it into the best version of itself, what it was meant to be.”