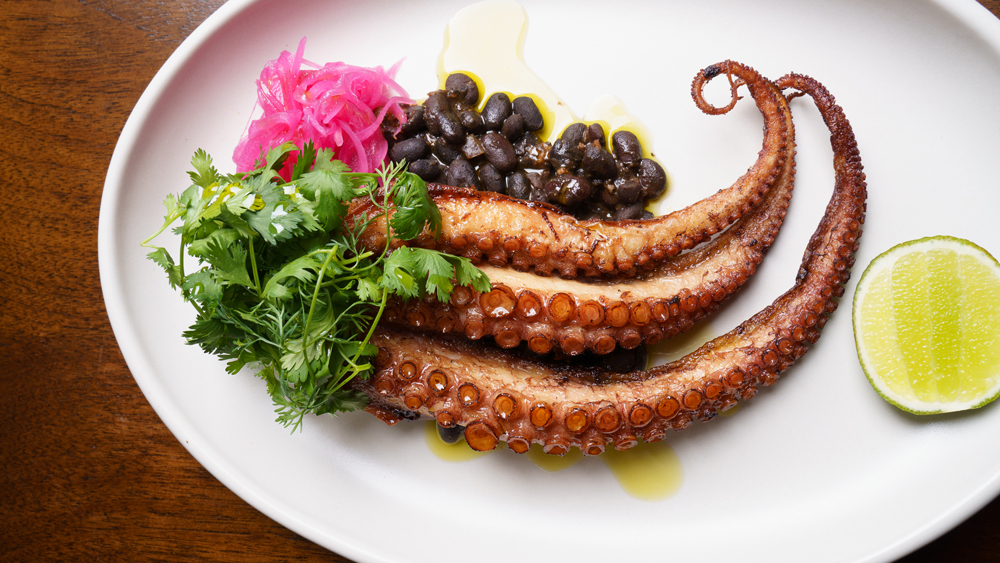 In February, Justin Bazdarich reached his breaking point. The chef behind Brooklyn’s Michelin-starred Oxomoco had just confirmed the closure of his year-old restaurant Xilonen. It had been a rough couple of months, but he was looking forward to getting back into the kitchen at his hotly anticipated new project, Bar Tulix, an ode to the beachy cuisine of Baja California and Mexico’s West Coast.

But on one of his first days at the new job—a month before the scheduled opening—he got Covid-19. And he was sent home for two weeks. It was just too much.

“I had not left my house in two years. Not even to go to dinner,” Bazdarich said. “We had two kids under 3. I’d just been working and cooking at home or getting takeout for literally two years. [Once I was sent home with Covid] I was so inspirationally tapped. It was hard for me to do anything.”

Once he felt physically better, his wife suggested he take a trip to clear his head; Bar Tulix was scheduled to open in a matter of days. Bazdarich called his partner, famed restaurateur John McDonald (Mercer Street Hospitality), for advice, and McDonald recommended Bazdarich hop a plane to Mexico the very next morning. So he did.

Bazdarich spent the weekend crisscrossing Mexico City, eating at a dozen restaurants, getting reenergized, and drawing fresh inspiration for the seafood-heavy menu at Bar Tulix, which just opened in SoHo (25 W. Houston St).

“I’d had a rough draft of the menu, but then I kind of reconfigured everything,” said Bazdarich, who has years of experience traveling in the region. “The original idea was the influence from the western, Baja Peninsula coast. There’s obviously tons of seafood there, but then you’ll also find cattle ranches and wineries. And then I decided to tap the whole country, to bring in Mexico City.”

Bazdarich said the idea is to get the best seafood possible and then minimally tweak it with interesting flavors. Those include a bevy of Southeast Asian ingredients, which he spotted being used everywhere from high-end restaurants to street-side food stalls during his recent dash through Mexico City.

“Your salsa macha is kind of like your [Chinese] chile crisp; it has nuts and seeds and chiles and garlic and spice,” he said. “I found a lot of soy, miso and ponzu, too—Japanese ingredients. That was something that to me was the most exciting aspect of going down there. I needed to bring in those Asian flavors [to Bar Tulix].”

For those looking for Xilonen 2.0, a cult-favorite mostly vegan spot, Bar Tulix is not it. Here, there is, of course, the beaucoup seafood, plus queso, chicken, duck and beef (tartare, short ribs with salsa negra). Only the fried potatoes from Xilonen live on, served with octopus, romesco and celery salsa.

McDonald (Lure Fishbar, Bowery Meat Company) took charge of designing the 65-seat dining room with Meyer Davis Studio (Samos in Mexico City, the Dutch in Miami), which is dark and moody and very SoHo. Bar Tulix has high-gloss black walls and dark oak tables that are lit by candles.

While the last few weeks have been a sprint for Bazdarich, Bar Tulix has been in the works with McDonald, a longtime friend, for years. Having McDonald handle all the operational aspects has been a “blessing,” said Bazdarich, who blamed “factors outside our control” for Xilonen’s recent shuttering.

“He is a great operator; he has huge infrastructure,” Bazdarich said. “He has an HR team and accounts receivable … It is a relief, to say the least, to just keep my head down and focus on what I do best.”