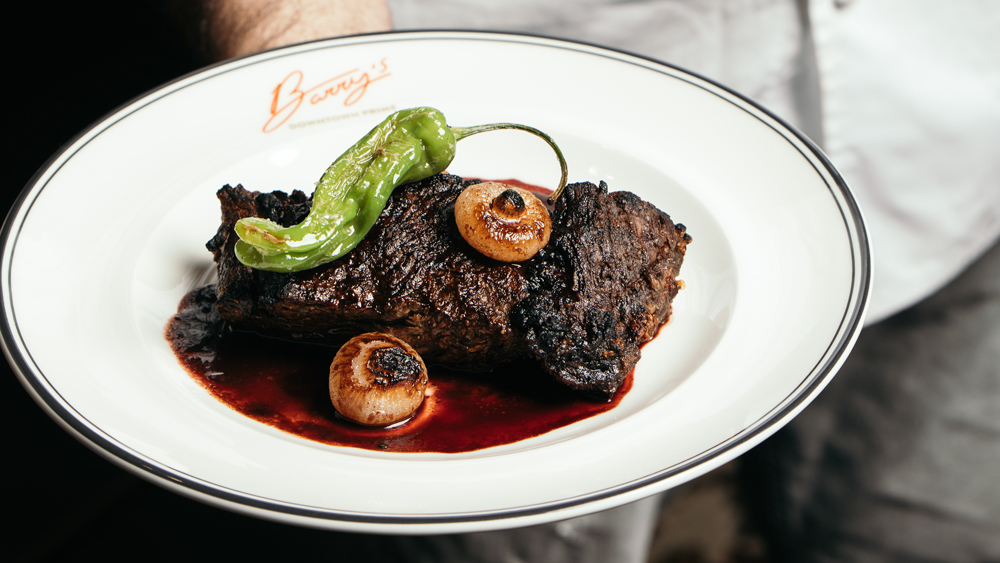 At Barry’s Downtown Prime, the Las Vegas steakhouse that will open on October 28 inside the new Circa casino-resort, the signature cut will be known simply as Barry’s Steak. It will be 12 ounces of beautifully marbled rib cap, also known as rib eye cap or spinalis dorsi, grilled over fruitwood and 900-degree coals before being served with shishito peppers, cipollini onions and jus.

Chef Barry S. Dakake has been cooking at top-tier Vegas steakhouses for two decades, and some of his fondest childhood memories involve steak dinners, so you should believe him when he tells you that rib cap is a superior cut.

“I think it’s the best cut because it’s the most flavorful,” Dakake said. “You know when you order the prime rib and there’s that rib eye spinalis at the top? That’s the first thing I always used to go for as a kid. It’s just so tender and juicy. It’s like a filet on steroids. When I do a cookout at my home, I buy spinalis and my guests go crazy.”

For Dakake, who used to run the kitchen at Palms meateries N9NE Steakhouse and Scotch 80 Prime, Barry’s Downtown Prime is a place to update his greatest hits and also come up with dramatic new crowd-pleasers. And he’ll be doing this exclusively for grown-ups because Circa (a downtown property with the world’s largest sportsbook) will be the only 21-and-over casino-resort in Las Vegas when it makes its October 28 debut.

Surf-and-turf was one of the most popular dishes at N9NE Steakhouse, so Dakake will serve a plate of filet mignon and Maine lobster with roasted garlic aioli and a new red wine sauce.

“When I say I want to bring things back, I mean that I want to bring back things that were great,” Dakake said. “People love steak. People love lobster. What’s better than to mimic what I’ve done in the past and just make it greater.”

Dakake will have one of the most dramatic side dishes in Las Vegas: lobster macaroni-and-cheese that’s made with an entire 1¼-lb lobster and served inside a lobster shell. It’s a reaction to how he got tired of seeing macaroni and cheese in an au gratin dish at his Palms restaurants and every other steakhouse.

“I was just lying in bed thinking ‘lobster shell, lobster shell,’” Dakake says. “What do we do with lobster shells when we take the meat out? There’s got to be something we can do with it. The heck with it, let me fill it. Fill the whole damn shell up. I think that will be one of my signature dishes also, but I can’t say that until I look at the sales at the end of the year.”

Barry’s Downtown Prime, which Dakake will open with partners Yassine Lyoubi, Marco Cicione and Donnie Rihn, will be on the bottom floor of Circa, below the hotel lobby. The elevator entrance to the restaurant will be directly beneath the neon kicking cowgirl known as Vegas Vickie, a glowing nod to the colorful history of downtown Vegas. There will also be plenty of throwback glamour on the menu at Barry’s Downtown Prime.

Steak Diane will be prepared tableside. Dakake’s version of this classic dish will feature a center-cut rib eye with a Worcestershire-brandy mushroom sauce. Other tableside showstoppers at Barry’s Downtown Prime will include a flambéed lobster with rigatoni and vodka sauce. For dessert, guests can see baked Alaska lit on fire or s’mores roasted tableside.

Barry’s Downtown Prime will be a big 350-seat restaurant with numerous private-dining setups (including a chef’s table and the Pioneer Club lounge), so Dakake knows he needs to have a diverse menu for all kinds of festive occasions.

He and chef de cuisine Patrick Hodge III (who was previously Dakake’s right-hand man at N9NE Steakhouse) will serve tomahawks and Japanese wagyu. Steaks will be cooked on a custom-designed double-sized grill with a rack system that allows chefs to move meat closer to or further away from the fire as necessary.

Beyond steaks, there will be a chilled shellfish plaster, organic chicken, sea scallops and even a surf-and-turf sushi roll with lobster and peppered beef tenderloin. But Dakake will also offer vegan selections, including romanesco broccoli steak and vegetable truffle meatloaf made with roasted root veggies.

The project is a culmination of Dakake’s long-held dream to own his own business by the time he turns 50. Dakake, who celebrates a half century on October 20, is making that dream happen. (The company that Dakake started with his partners is called Make It Happen Hospitality.)

At Palms, Dakake served a steady stream of celebrities. At Scotch 80, he cooked for the Vegas Golden Knights and drank Macallan in the kitchen with them. N9NE attracted sports legends (like Muhammad Ali and Joe Montana), Oscar winners (like Russell Crowe and Adrian Brody) and chart-topping musicians (like Britney Spears and Ozzy Osbourne). That was all a lot of fun, but Dakake says what’s learned over the years is that treating locals like VIPs is the key to his success.

“We made a lot of friends with the locals, which I really value,” he said. “Celebrities come in and out of town, but your locals are here forever. You want to make them feel like superstars. You want to get to know them because it’s like they’re eating at your house.”

So like with the rib cap, Dakake thinks about how he cooks at home for his family and friends. Even something like grilled cheese and tomato soup could turn into a winter appetizer at his restaurant.

“Everything that I cook at my restaurant I eat at home because I think it’s the best,” Dakake said.