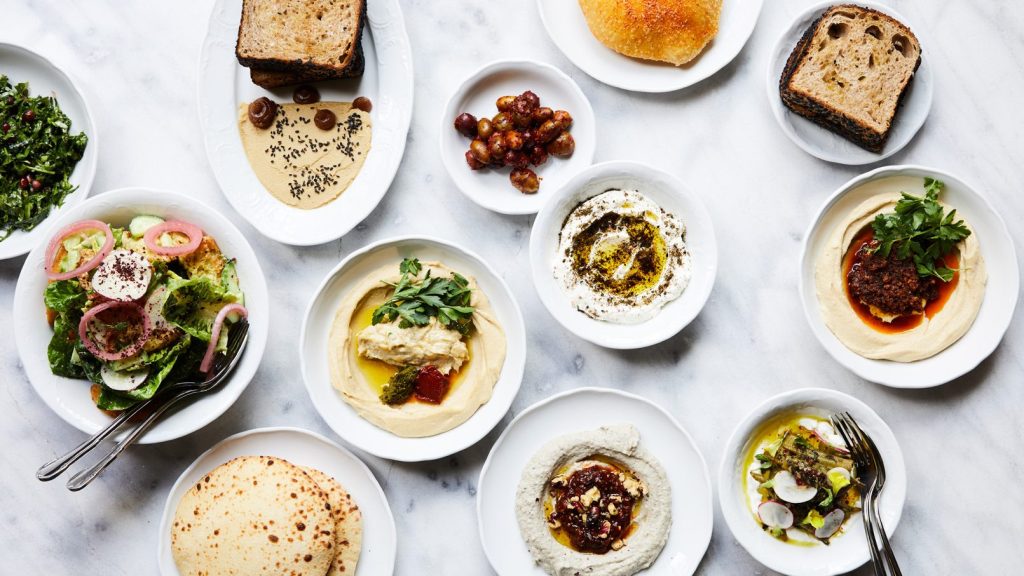 For most of Ori Menashe’s professional career, he’s been cooking Italian food. The L.A.-born chef who grew up in Israel cut his teeth at Nancy Silverton’s Pizzeria Mozza and Gino Angelini’s Osteria Angelini. Eventually he set out on his own, making a name for himself when he and his wife Genevieve Gergis partnered to open Bestia—Italian for beast—one of L.A.’s best restaurants practically since the day it opened in 2012. But Menashe immediately had another restaurant in mind.

“About two or three months into Bestia, I wanted to open a Middle Eastern restaurant,” Menashe says. “I’ve cooked Italian for so long, but I’ve always wanted to cook this type of food. These are the flavors I cook with at home for friends and family, why not cook that food for the public?”

Now the public can eat it. After years of delays, setbacks in construction, and just generally being really busy with Bestia, Menashe’s dream of a Middle Eastern restaurant came true last Friday, when he and Gergis opened Bavel. From food to design, the place is a culmination of their travels and heritage.

The husband-wife duo behind Bavel and Bestia in LA.  Photo: courtesy Nicole Franzen

A meal at Bavel begins in much the same way Menashe started tackling the opening menu. Though he had ideas for dishes in his head for years, he focused on getting his breads right. “That’s the first thing because it’s not in every dish, but if you have really good breads and spreads, that’s a great place to start,” Menashe says.

To build out the rest of the menu, Menashe used a similar philosophy in how he approaches dishes at Bestia. He’s not striving to slavishly recreate traditional dishes. Instead, he’s looking at flavors and techniques as building blocks that he then plays around with to make something delicious—but not beholden to some notion of “authenticity.” And though his background may lead to Bavel being lumped in with the current bumper crop of Israeli restaurants in L.A., the duo certainly isn’t limiting themselves.

“It’s broad Middle Eastern. It’s not a specific category,” Gergis says. “It’s not like you can put a country on it.” Meaning that one dish may have a Yemeni flatbread—malawach—while another, like the lahmajoun, is Turkish in origin. And the spices span from across the region, including cardamom, turmeric, cumin, sumac, mace, fenugreek, and many more. They’ll also impart flavor with the use of fermented fruits, smoking food in the hearth, and cooking over charcoal.

“The food we’re creating here is from all the traveling Genevieve and I have done our whole lives,” Menashe says. “From me being a kid and eating in Palestinian, Yemeni, and Turkish restaurants, to our recent trips to Morocco, Turkey, and England—where there’s a big Middle Eastern population. As well as trips to Israel and even Southern Spain. The travel is good to remind me just how aggressive things need to be flavor-wise. If it’s not intense, it doesn’t feel Middle Eastern.”

Their trips also influenced the design of the restaurant. Gergis, along with the firm Studio UNLTD set the space apart from Bestia. “Bestia is old, Italian, dark,” Gergis says. “For this one, I was inspired at how open and airy the restaurants are when I traveled. They have really nice ceilings with plants growing, like here. The climate of L.A. mimics Marrkesh or Tel Aviv or Casablanca, so I looked there for inspiration.”

But she also included touches that are very person, which is a fair amount of 1970s-inspired furniture and orange bathroom tile. “The design team said, ‘That’s a lot of orange tile, you know that, right? You’re crazy,’ and I was like ‘yep.'”

For dessert, which Gergis heads up, she certainly wasn’t looking to the Middle East for ideas. “They don’t really do desserts. Who wants a bowl of dates and some dried nuts with no salt on it?” Gergis says. “I look to flavors and ingredients, but make them with more a French technique.” So on the opening menu there’s a strawberry sumac and sweet cheese pastry with a pistachio ice cream, and a licorice root ice cream bonbon.

Now that the restaurant has opened, Gergis isn’t exactly taking time to enjoy it just yet. Beset by delays that included dealing with unresponsive inspectors at the city, it was a long road to Bavel for the couple. “We were supposed to open this four years ago. We lost a ton of money—like hundreds of thousands of dollars. The city does not make opening a business easy. They make it very hard,” she says. “I’m looking forward to getting everything going and running smooth then we can start playing around. Restaurants are like a baby, in the beginning you’re just making sure the baby doesn’t die.”

Her husband was letting it soak in a little bit more. “When Bestia opened, it was a shit show. We never expected it to be that busy. We were super understaffed,” Menashe says. “This restaurant is built to run well. All the things we couldn’t have for Bestia, we have for here so we can be successful from day one. When we served our first meals for friends and family, I wasn’t even nervous. I was very emotional, I was close to shedding a tear. I was amazed this was happening in my life. To be able to do this with so many talented people is ridiculous.”