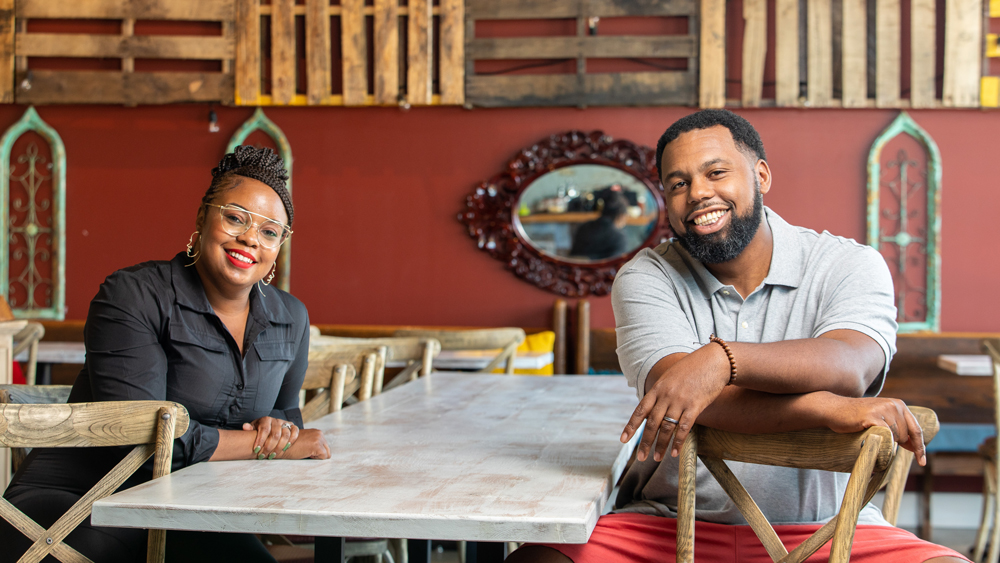 Subrina and Greg Collier, the Charlotte culinary power couple behind Leah & Louise, have a plan to shake up the hospitality business. They want to empower and embolden Black chefs and entrepreneurs in an industry that often exploits them; offer mentorship for the next generation of Black-owned restaurants; shatter stereotypes and celebrate their roots through their food; and also build opportunities for other Black visionaries to do the same. So they’re creating a food festival and restaurant group devoted to achieving those goals.

“Our mission is economic empowerment through hospitality because that’s what we know,” says Subrina, who was selected as a James Beard Foundation Women’s Entrepreneurial Leadership fellow in 2020.

Both the festival and restaurant group are known as BayHaven, a name that’s a nod to where the Colliers were raised in Memphis. Subrina grew up in Frayser, a neighborhood also known as The Bay. Greg grew up near Graceland in the Whitehaven area. BayHaven at its core is about the Colliers proudly declaring who they are, where they came from and what they want to accomplish. They’re here to encourage other Black chefs and entrepreneurs to chase their dreams without compromising their identities. The festival will be “a celebration of Black culinarians,” Subrina says.

The BayHaven Food & Wine Festival (which was originally named the Black Food & Wine Festival) will take place on the weekend of October 22-24 at Charlotte’s Camp North End, the 76-acre development that’s home to Leah & Louise and its “Rich Boys” fried oyster sliders, scallop suya and oxtail-and-dumplings. The plan is for ticket sales to start on Juneteenth. Prominent chefs including Atlanta’s Todd Richards, Asheville’s Ashleigh Shanti, Mobile’s Duane Nutter and Top Chef contestants Tiffany Derry, Chris Scott and Keith Rhodes are part of the lineup. Charlotte chefs like Lindsay Williams will also cook during the festival. Events will include a family-friendly carnival with food trucks and a Ferris wheel. There will also be sit-down dinners, walkaround food-and-wine tastings, cooking demos and a jazz brunch.

The Colliers developed their event based on years of working other food festivals, where they noticed something didn’t quite add up. After being in cities like Atlanta and Charleston, they clocked that “the demographic of these festivals never matches the actual demographic” of where the festivals take place, Subrina says. While they enjoyed their experiences, they set out to be different in other ways too. A lot of them “work the hell out of you,” Subrina says. Festivals sometimes involve chefs donating their time and food while also paying out-of-pocket for a lot of travel expenses. And there can also be the frustration of driving all around a city you’re not familiar with in order to get prepared.

So the Colliers are busy talking to suppliers, hotels and other potential sponsors about offering ingredients, lodging and perhaps even stipends to participating chefs. And having the entire festival at Camp North End will give chefs easy access to all events.

“I want it to be more like a retreat for the chefs,” Subrina says.

BayHaven Restaurant Group is planning to open a couple new places in the next two or three years and many more restaurants beyond that. The festival, of course, could be a great way for the Colliers to identify talent that they could hire, partner with or fund in the future.

“There’s not a lot of representation in mid-to-high-end finer dining,” Subrina says.

Upending this imbalance is something they’ve been thinking about for a long time. Greg, a two-time James Beard Award semifinalist, is one of the chefs behind Soul Food Sessions, a dinner series that started in Charlotte five years ago and has traveled around the country.

“It was kind of like a fuck you to the preconception of Black chefs only doing collard greens and macaroni,” Subrina says.

Soul Food Sessions, which had an event at New York’s James Beard House in 2019, has showcased Black foodways in elegantly plated meals made with artisanal ingredients and fine-dining techniques. It’s also been a way for Collier and fellow chefs Michael Bowling, Greg Williams, Jamie Barnes and Jamie Turner to bond over shared experiences and brainstorm new ideas. And Soul Food Sessions has raised money to create scholarships for Black culinary students.

The BayHaven Food & Wine Festival, which might have more than 75 participants including chefs, farmers, winemakers, brewers, distillers and other artisans, will be a way to have an even bigger conversation about what’s next for a restaurant industry that many believe needs a reset. The Colliers, who are partnering with No Kid Hungry on their first festival, clearly want BayHaven to be a force for change.

“We want to give young Black culinarians opportunities to open up restaurants and open up businesses,” Subrina says. “Honestly, me being in the industry over 20 years, I don’t know a whole lot of Black-owned restaurant groups. When you’re coming up, representation matters. Because if you don’t see it, you may not think it’s achievable. We need to see more representation in everything, and that includes restaurant groups.”