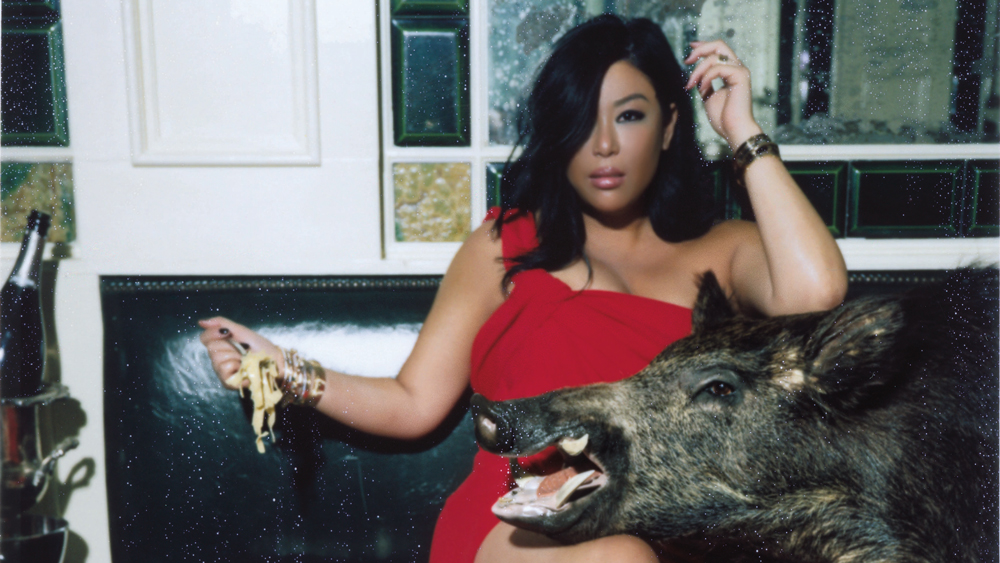 Angie Mar is walking down the steps of her subterranean West Village restaurant, The Beatrice Inn. She’s wearing a slip dress, a full-length fur coat, and nude Louboutin heels. There’s a bottle of Champagne in one hand, and in the other a leash tethered to a taxidermied skunk.* “I thought to myself, if Salvador Dalí can walk around Paris with an anteater, I can absolutely walk into my own restaurant with a skunk,” Mar says.

The skunk scene is not a common occurrence at The Beatrice Inn (or “Bea” as Mar calls the restaurant), but the moment was memorialized for her debut cookbook Butcher + Beast, released on October 1 and photographed exclusively on Polaroid film by Johnny Miller. Also shot: Mar eating pasta while dressed in a red gown with a taxidermied boar’s head in her lap; Mar curled up in bed with truffled hen and leek pie, and former Food & Wine editor-in-chief Dana Cowin, also in a fur coat, chomping into the dry-aged Beatrice burger.

The book is a hedonist’s collection of photographs and recipes. It’s also a manifesto on craft, hard work, style and excess. Mar didn’t dilute her world for consumers nor did she design the book for the four-letter-word-averse, restaurant critics, card-carrying members of PETA, incels or Mike Pence squares.

Mar may be the only chef I know who does not like vegetables, unless they’re in service of meat. She abhors chicken and cooked fish, too. And she writes that after buying The Beatrice Inn from Graydon Carter in 2016, she implemented a “zero fucks given” policy for 90 percent of her menu. The future would be authentic Mar, as carnal and over-the-top as she pleased.

The book was shot with a Polaroid camera.  Photo: courtesy Johnny Miller

Dining at The Beatrice Inn is breathtakingly joyful if you submit, as I did last week, to eating fat sea scallops and trumpet mushrooms scented with peony, baked in puff pastry, and covered with sauce allemande and caviar. My table helped vanquish a whole rabbit smoked over Muscadet vines and packed with chestnut-giblet stuffing. We did eat vegetables: Kyoto carrots (“because they’re cute with the rabbit,” Mar says) and pommes Anna with crème fraîche and gorgonzola.

In 2019, critics have begun to push back on this indulgent brand of luxury, throw-back dining à la Tak Room, The Grill, and Bea. Do we really need spaces to make wealthy people feel comfortable and pampered? Do we need to champion restaurants that evoke eras when so many people were excluded from these centers of power? Mar answers with pheasant Périgord en croûte and crème brulée set in a marrow bone.

“History is important. No one is trying to celebrate exclusion. Chefs like Mario Carbone, Thomas Keller and myself are celebrating our history in food, and an era past. The Beatrice has been a part of New York for nearly 100 years. Why would we not celebrate its heritage and the impact that it has made on this city?” she says.

Mar’s creative process relies on looking back, on visiting the Metropolitan Museum of Art and burying herself in Escoffier. She cites Copacabana, The Great Gatsby, Sophia Loren in “Lady Liberty,” Louis XV and Mary Queen of Scots as menu inspiration. She wields history skillfully and with purpose.

“I have always believed that in order to stay true to one’s vision, it’s best not to pay any mind to what’s going on to the right or left of you. It’s just a distraction,” she says. “I have never been afraid of a bit of controversy, and if I had been, The Beatrice would not be what it is today.”

The concept of family—blood and chosen—also is paramount to Mar. The first time I visited the restaurant, right after Mar took over the kitchen, I ate and fell in love with her fork-tender, earthy and floral milk-braised pork shoulder. It’s the first recipe in Butcher + Beast and a tribute to Sunday dinners with her family. Her father (who grew up in the restaurant business and died in 2018) and Pat LaFrieda (her mentor, friend and meat purveyor) loom large in the book. Mar also recounts cooking pasta for her brothers after her parents’ divorce, eating Marie Callender pot pies with her mom and buying The Beatrice Inn with her cousin, Melissa Merrill Keary.

Through the camp, Marlboros and dead animals, Butcher + Beast peels back the layers of Mar’s emotional world. It also articulates her signature balance of masculine and feminine forms and flavors, best exemplified in dishes like the aforementioned milk-braised pork with fragrant jasmine rice soubise. Mar sees parallels with fashion: “I love dresses that embody a feminine silhouette, and also wear men’s tuxedos if the mood strikes me, so shouldn’t I be allowed to celebrate those notions on a plate, as well as in my wardrobe?”

The recipes—most of which are too complex for home cooks—are reminders of Mar’s devotion to craft. She’s constantly experimenting with aging techniques, updating historic recipes, and pushing to make classic dishes one-of-a-kind-Mar. (Of her boudin noir, she writes, “Think Chanel.”)

For her 2019 autumn/winter menu, Mar found inspiration in Maria Grazia’s Dior haute couture show. “It was done exclusively in black, which I found to be fascinating. [The show] forced me to look at the details. The stitching. The craftmanship. And that’s what food is, isn’t it? It’s the details and the craftsmanship that really make something sing,” she says.

Angie Mar sees more potential than most in a piece of meat, a basement restaurant, a night out in New York City—and a cookbook project. You’re welcome to join in. You just have to turn yourself over to the glamorous, gritty, romantic, uncompromising, and unapologetic world that is The Beatrice Inn and Butcher + Beast.

Editor’s note: A previous version of this article said the skunk was still alive and descented, but it was taxidermied.