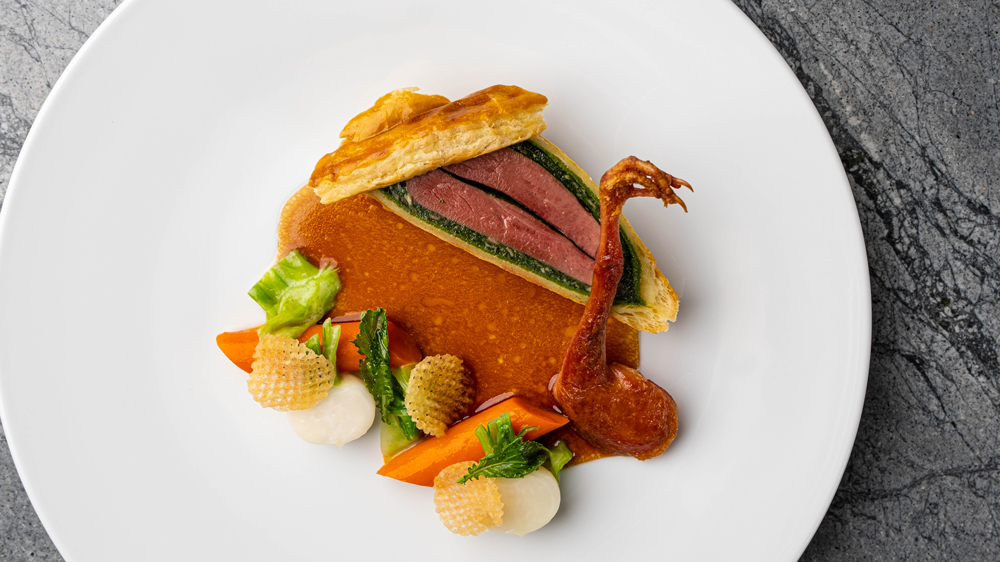 Matthew Kirkley was delirious when he got the call. The chef at San Francisco’s two-Michelin-starred Coi had been doubling up his work for months, doing dinner service at the restaurant and then 12-hour overnights to prepare for the Bocuse d’Or trials, a prestigious international culinary competition that American chef Mathew Peters had just won.

“I was absolutely exhausted,” Kirkley said of his workload in 2017. “The thing about that competition is that you spend a year and a half essentially preparing for one service. It just saps all of your energy.”

But the chef, who had already guided multiple restaurants under his tutelage—such as Chicago’s L2O—to a combined six Michelin stars, had his eyes set on the 2019 Bocuse d’Or prize. If all went according to plan, Kirkley and his commis, Mimi Chen, would put in the training hours in San Francisco, win the national trials in Las Vegas, and then leave their jobs and move to the Napa Valley for 14 months of further prep before the international contest in Lyon, France.

By the time the trials rolled around, he already had one foot out the door at Coi.

“And then, four days before I was leaving for Vegas, I got a phone call that said I got a third star,” Kirkley said. “It was unforeseen. Life takes its twists and turns.”

Kirkley and Chen ended up winning the trials in Las Vegas to represent Team USA in Lyon and he never returned to Coi, where he had been executive chef for two years. To outsiders, that seemed like quite a twist and turn, considering Kirkley had just leveled up a modern seafood restaurant in the eyes of the Michelin Guide, in a year when few other chefs in the country could accomplish the same. But an even bigger twist and turn would come in the years that followed. Not only would Kirkley leave Coi, but he would leave the U.S. altogether, blazing a new culinary path on the other side of the world.

The big question was, what exactly went down at Coi that drove him away? Was he burned out at the restaurant? Was he pushed out by Coi owner Daniel Patterson, a controversial restaurateur whose Bay Area empire seemed to have deflated in recent years? No, Kirkley insists. The departure was bittersweet.

“I was pretty heartbroken to be leaving the restaurant,” he said. “It was something that I put a tremendous amount of energy into and it was difficult to step away from that. But the Bocuse d’Or had been in the back of my mind for 10-plus years. I knew that if I didn’t do it, then I was never going to do it. So, I did, for better or for worse. I wouldn’t change that decision.”

In Lyon in 2019, Team USA competed against 23 other teams and did not podium. Kirkley returned to Napa, where his wife, Lauren, was serving as captain of The French Laundry. Unemployed and restless, he was now one of the most highly decorated chefs in the country, with no kitchen to call home. He tried to plan his next big move with the same intention he had put into the last one.

“I didn’t really think about what I was going to do the day after the Bocuse d’Or,” he said. “The air kind of cleared and my wife and I looked at ourselves and said, what are we going to do now? We were in our mid-30s, young parents, but we were still kind of portable. Our daughter wasn’t yet in primary school and we didn’t own a restaurant. It kind of was like, what do we really have to lose?”

They began networking with friends and eventually got in touch with Richard Ekkebus, culinary director and executive chef of Michelin two-starred Amber at The Landmark Mandarin Oriental in Hong Kong. He invited the couple to visit. They flew out, fell in love with the city’s infrastructure and its fine dining scene, and decided they wanted to move there and make their mark on the global stage.

“It turns out we weren’t giving it a ton of thought,” Kirkley said, laughing.

But Lauren, who was from Southern Illinois, wanted her children to grow up with a larger, more diverse view of the world. And Kirkley, who hails from Baltimore, had always wanted to live and work internationally but had trouble finding inroads into Europe.

“Travel has always been something that captivates my imagination,” he said. “For nearly a decade I tried to find my way over to France, but it’s tricky as an American. As a young cook, it’s nearly impossible to get a visa.”

According to Kirkley, France’s employment system is set up to favor nationals, then members of the European Union. A restaurant must prove a job cannot be filled by anyone in all of France and all of the E.U. before they can offer it to someone with a visa. American chefs are basically locked out. Kirkley did a few under-the-table stages at restaurants in London and Paris when he was younger, but says he never was able to perform work for pay.

“The days of the 1980s and the stories of Emeril Lagasse just walking up to a restaurant knocking on the door, that isn’t a thing anymore,” he said.

But when Europe put up roadblocks, Kirkley found, Asia opened its doors. And American chefs—like The Restaurant at Meadowood’s Christopher Kostow—have been flocking to its shores.

“It’s undeniable that in the last 30 years, there’s been record-breaking economic growth over here [in East Asia],” Kirkley said. “There’s a great deal of affluence that has arrived. And the sophistication followed shortly behind. There is nothing but more and more opportunities for a lot of chefs, not only in China but Vietnam, Korea. Japan is right next to France as far as world culinary heritage. Business is booming.

“As long as there’s a willing government that’ll give you employment visas, there’s a lot to like, especially from a fine dining perspective.”

He and his family moved to Hong Kong in May 2019. Six months later, Lauren joined Belon, an iconic, neo-Parisian bistro in the SoHo district, as general manager. Kirkley took over the restaurant’s kitchen in October 2020 from the outgoing chef, Daniel Calvert, who had earned Belon its first Michelin star in 2018. A few months after Kirkley came on board, Belon closed down to undergo major renovations.

In late March, it reopened, with an updated, elegant design that mimicked its original blue color palette and iconography, and a reinterpreted menu by Kirkley, who was careful to leave on some signature dishes from the restaurant’s archives.

“It’s definitely a tightrope we’re trying to walk between new and old,” he said. “We didn’t want to totally abandon the previous restaurant. I mean, this was a successful, popular restaurant that had phenomenal food and service. We didn’t want to see that get wiped away. We wanted to stay Belon while simultaneously moving forward.”

The fan-favorite, minimalist Pigeon Pithivier is still on the menu, slightly modernized but mostly intact. Medium-rare pigeon breast is wrapped in spinach and mushroom farce, encased in a thin crêpe made of pigeon liver, and then bound in a buttery pastry crust. It is served with pigeon jus, honey-glazed carrots and butter-blanched cabbage. New dishes on the menu include Kirkley’s Salade Gourmande—a delicate combo of beef tongue and foie gras, brushed with Grand Marnier, and topped with black truffles, haricots vert, and herbs—and his signature Turbot with Beurre Cancalasie. Butter-poached turbot and blanched root vegetables are layered to look like fish scales and topped with beurre blanc that’s seasoned with watermelon radishes, apples, and vermouth.

Kirkley’s bewildered by the ingredients he can import to Hong Kong, where virtually nothing edible is grown or raised. He can get artichokes from Italy, unpasteurized cheeses from France, anything he can imagine from Japan and Australia. The glut of options, compared to what he’s used to having access to in California, has been overwhelming, so he’s dialed in his focus.

“I don’t know if I’m ever happy, but I’m really positive about where we are as a restaurant,” Kirkley said after one of his initial dinner services. Kirkley hopes to get Daniel Patterson, who he stays in touch with, over to visit one day.

“I learned a lot from Daniel. He’s a chef’s chef, the real deal,” Kirkley said. “He is absolutely unique—I still remember just how far he could push acid and salt in dishes. I’m deeply thankful for the opportunities he afforded me but I’m pretty grateful not to be trying to run a restaurant right now in the United States.”

And thanks to that third Michelin star, Kirkley, now a father of three, finally got permission to walk away.

“As a person that’s been doing fine dining for nearly 20 years, I hold Michelin to the highest regard,” he said. “That [third star] was a dream come true. The circumstances of how it came true are not particularly ideal and I don’t know if I ever had a chance to digest it. Because again, I was out of my mind sleep-deprived and putting all of my energy into winning the national competition. I didn’t really take the time to let it sink in.

“But I think that is a tremendous weight off my shoulders. I have less to prove now. I’m still as passionate as ever about how I cook on a day-to-day basis, but I got that monkey off my back. I don’t have to keep asking myself, am I good enough? At least at one point, for an instant, I was.”