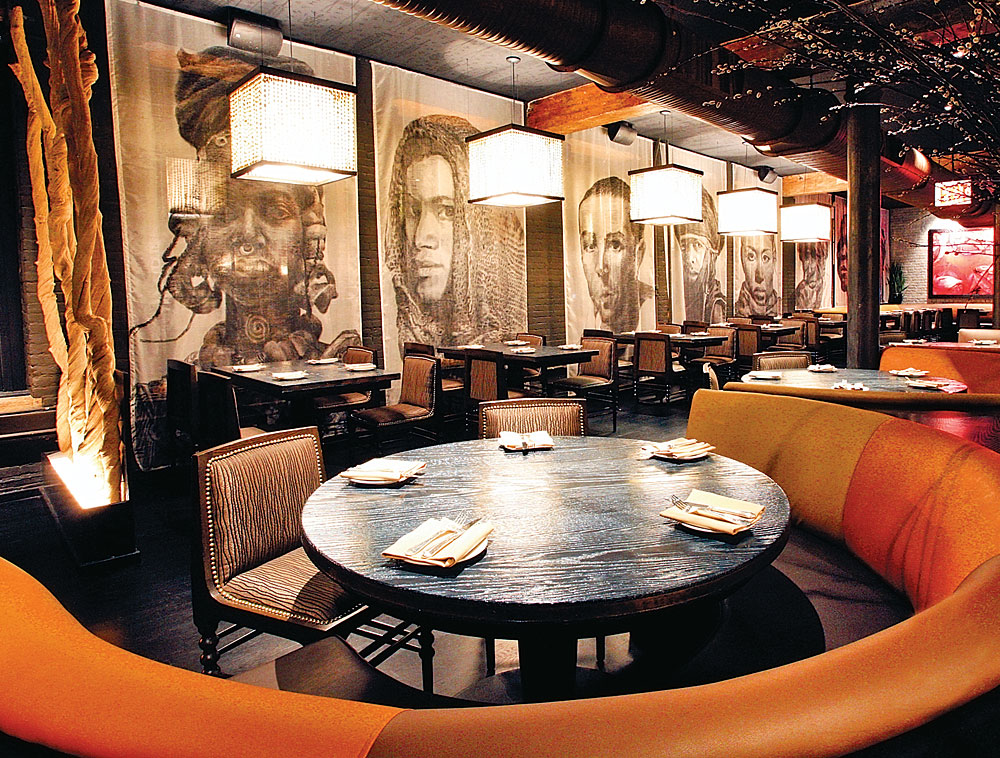 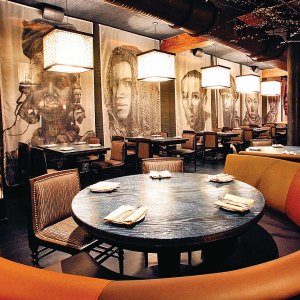 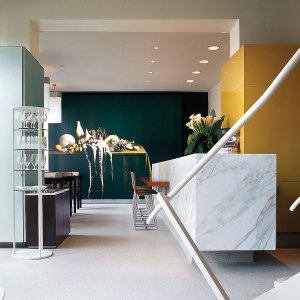 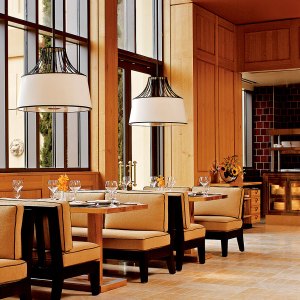 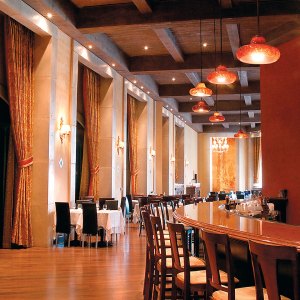 Mathias Dahlgren (+46.8.679.35.84, www.mdghs.com), which opened in May 2007 in Stockholm’s Grand Hotel, is in fact two restaurants. Matsalen (“the dining room” in Swedish) seats 37 for dinner in a salon that combines velvet banquettes with green-gray walls and gleaming brass chandeliers. At Matbaren (“the food bar”), patrons are encouraged to order one small plate at a time, so that meals progress at a leisurely pace. The restaurant’s namesake, Swedish chef Mathias Dahlgren, draws on a range of local and imported ingredients—lemon sole from the Kattegat channel, Småland veal pâté, Spanish jamón serrano, and yellow chanterelles from the forests of Romania—?in his elegant yet nonfussy preparations. This being Sweden, potatoes, dill, brown butter, and an astonishing array of berries provide the few constants on the ever-changing menu. —Andrew Ferren

Marcus Samuelsson, best known for his Swedish cooking at New York’s Aquavit restaurant, was born in Ethiopia as Kassahun Tsegie and adopted by his Swedish parents when he was 3. He made his first trip to Africa in the early 1990s and soon embarked on a quest to understand the continent through its food. His efforts culminated in Merkato 55 (212.255.8555, www.merkato55.com), a two-story restaurant that opened in February in Manhattan’s Meatpacking District. Instead of focusing on specific countries or regions, Samuelsson takes a pan-African approach that extends to the Caribbean and the American South. Merkato 55, which derives its name from an Ethiopian bazaar and the numeral in its own street address, presents a broad range of surprising, delightful tastes that have never before received the attention of an elite chef. Samuelsson hopes it will do for African food what Nobu did for Japanese food. “Someone has got to go first,” he says. “We must start somewhere.” —S.G.S.

Last July at B&B Ristorante (702.?266.9977, www.mariobatali.com), one of Mario Batali’s Las Vegas restaurants, two middle-aged women perused the menu and debated which primo, or pasta dish, each should order. “How about the lamb’s-brain ravioli?” one asked in a skeptical voice that indicated that she had never before considered eating such a thing, and found the notion mildly frightening. After much discussion, punctuated by friendly urging from their waiter, the pair took a chance on the dish, which Batali also serves at his New York restaurant, Babbo. The menu invites you to expand your palate by sampling lamb’s brain or warm tripe (cow’s stomach) with Parmesan cheese, but it also includes familiar favorites such as barbecued skirt steak. —S.G.S.

For almost 20 years, Neil Perry’s restaurant Rockpool, in Sydney, Australia, defined modern Australian cooking. Connoisseurs came from around the country and the world to sample his salad of abalone, mussels, tea-smoked oysters, and noodles with soy and truffle oil. But in late 2007, Perry demonstrated his talent for capturing the zeitgeist. He closed Rockpool for 12 days, revamped it, and then reopened it as Rockpool (fish) (+61.2.9252.1888, www.rockpool.com). The rechristened restaurant has a lighter, brighter setting that allows tables of dressed-to-the-nines diners to coexist peacefully with neighbors clad in shorts and T-shirts. Seafood still headlines the show. Line-caught bar cod, which is pulled from deep waters on the edge of the Australian continental shelf, is grilled with herb butter or appears in a currylike broth. Wisely, Perry carried over select Rockpool classics such as the stir-fried spanner-crab omelette and his creamy date tart dessert, which remains dreamily impressive, two decades on.  —Simon Thomsen

Dean Fearing could have held court at Dallas’ Mansion on Turtle Creek for as long as he wanted. Instead, after more than 20 years in the kitchens of that venerable hotel’s restaurant, he moved on, although he did not move very far: Fearing’s (214.922.4848, www.fearingsrestaurant.com) is located in the new Ritz-Carlton, Dallas, barely one mile from his former place of employment. The establishment is divided into seven distinct rooms and spaces that welcome you whether you are wearing your Sunday best or your favorite pair of jeans—a notable contrast to the formal-at-all-times Mansion. Fearing’s buffalo tenderloin marinated in a maple–black peppercorn sauce and served with jalapeño grits and a butternut-squash taquito recalls the chef’s Southwestern-cuisine heyday. However, the lobster coconut bisque with lobster wonton could not be further removed from that era. —Dick Washburne

Carnevino (702.789.4141, www.mariobatali.com), located inside the new Palazzo hotel in Las Vegas, is Mario Batali’s 13th restaurant and first steak house. While most of its menu items are typical of a steak house, the restaurant also coaxes you past your comfort zone. Adam Perry Lang, who transformed Robert’s Steakhouse at the Penthouse Executive Club in Manhattan into a serious restaurant, selects the beef, which is then dry-aged for as many as 49 days in Carnevino’s warehouse. Zach Allen, who also helms Batali’s two other Las Vegas restaurants (see B&B Ristorante, page 328), creates 12 vegetable side dishes per night and permits no dreary standards to leave his kitchen: Instead of a potato puree, Carnevino serves potato and parmigiano zeppole, a light preparation of eggs, cheese, and nutmeg. Batali pushes steak-house boundaries with his menu of pasta sides, most of which are made on the premises. The plate of ravioli di stracotto—stuffed with braised pork, bathed with a sauce made from slow-cooked duck livers, and drizzled table-side with balsamic vinegar—is a standout. —Jennifer Hall

Before Tim Cushman turned his attention to chicken wings, the poultry’s finest hour came when a barkeep in Buffalo, N.Y., fried them, slathered them in sauce, and sold them for a dime apiece. At O Ya (617.654.9900, www.oyarestaurantboston.com), the sleek yet inviting 40-seat Japanese-American establishment that Cushman runs with his wife, Nancy, he soaks a single wing for a day in a brine of tea, honey, and the juice of a yuzu, an Asian citrus fruit. Then he stuffs the deboned wing with a pâté of ground chicken meat, shiitake mushrooms, and Napa cabbage, and places it on a bed of homemade kimchi. He charges $12 for this morsel, and it is worth every penny. The Cushmans named their restaurant O Ya because it conveys two meanings in Japanese: “gee whiz” and “discovery.” Dine there and you will agree that the name is appropriate. —S.G.S.

In addition to remaking Le Jules Verne, the fine-dining restaurant inside the Eiffel Tower (see page 326), Alain Ducasse opened a restaurant in Manhattan in January. Rightly or wrongly, Adour (212.710.2277, www.adour-stregis.com) has been viewed as a replacement for Alain Ducasse New York (ADNY), the establishment he operated inside the Essex House hotel from 2000 through early 2007. Ducasse promised that Adour, which he named after a river in the region of France where he was raised, would emphasize wine, would be slightly less plush than ADNY, and would not lock diners into a marathon-length meal if they did not want one. He has delivered on all counts. Wine is part of the decor at Adour—you are led to your table past hundreds of vintages displayed in glass walls—and the five-seat interactive wine bar, with its touchscreen surface that allows you to summon tasting notes and other information, avoids seeming like a gimmick. (Though the programmers should consider deleting the white stars that trail your finger across the bar top as if you were Mickey Mouse playing the sorcerer’s apprentice.) The quirkier luxuries that prompted critics’ mockery at ADNY have been toned down or eliminated. The little ottomans that ADNY offered to women as purse rests have been replaced by modest retractable wooden platforms that are built into the seats. And while you can order one course and a glass of wine, the menu will tempt you to abandon that plan. If you must stick to a single dish, make it the breakfastlike appetizer of sweetbreads meunière with egg, wild mushrooms, and toasted brioche. —S.G.S.