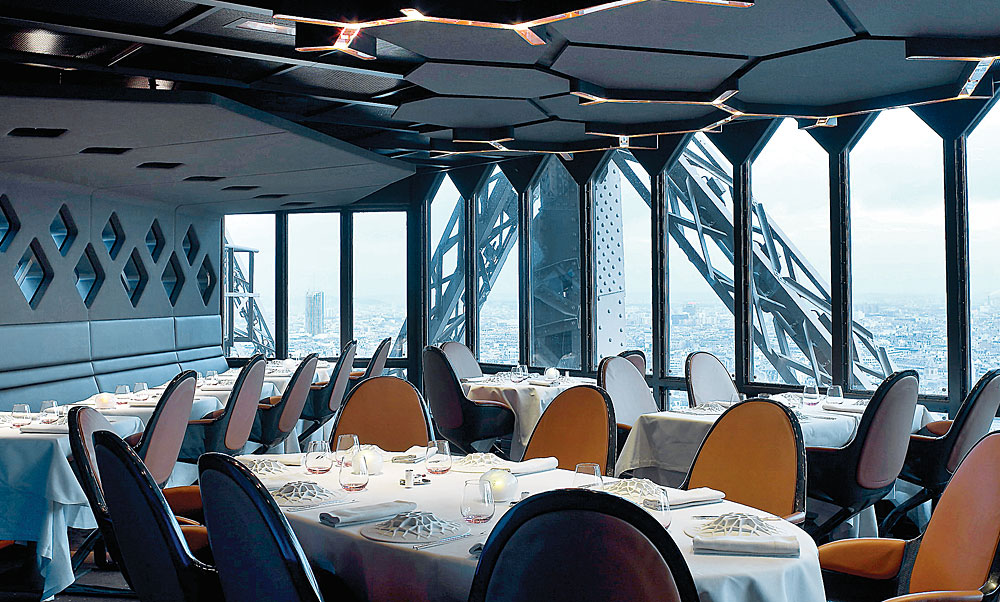 From certain tables in Le Jules Verne, if you are seated facing the right direction and the weather is clear, you can spot the Arc de Triomphe, the Louvre, Les Invalides (with Napoléon’s tomb), the Tuileries gardens, and Notre-Dame Cathedral. Such a stirring vista could compensate for mediocre food and service. But French chef Alain Ducasse would never permit mediocrity in any of his establishments, let alone at Le Jules Verne, the fine-dining restaurant located on the second platform of the Eiffel Tower, 410 feet above Paris.

In early 2007, Ducasse won a nine-year contract with the city of Paris to operate the restaurant; after extensive renovations, it reopened in January. The food is sufficient to the view, which might be the balance that Ducasse sought. A Frenchman would want to serve food worthy of the Eiffel Tower—without upstaging it.

The plump pair of seared scallops that star in one of Ducasse’s appetizers arrive with perfectly browned edges. His take on surf and turf is crayfish and a Bresse chicken fricassee with a sauce of crayfish bisque and chicken stock. And the tower bolt, a hexagonal cake of dark chocolate praline with a side of hazelnut ice cream, serves as a clever (and delicious) reflection of the surroundings.

Le Jules Verne first opened 25 years ago, and it has retained its name under various stewards. An etched mirror inside the restaurant’s ground-floor reception area features a Verne quote that translates as, “No matter what I invent, no matter what I make, it will always be a lower truth. There always comes a time when the creations of science exceed those of the imagination.”

Construction crews installed the restaurant during an extensive overhaul of the Eiffel Tower that took place from 1981 through 1983. Ducasse’s team needed four months for its renovations, and the work was trying. “It’s a very complex place,” says the restaurant’s designer, Patrick Jouin.

Because safety precautions limit the total weight of the Eiffel Tower, the workers had to place every piece that was removed from Le Jules Verne on a scale to deduce what the weight budget would be for the additions and improvements. Jouin says that the existing concrete floor was replaced with one made from lighter concrete to counteract the heavy new kitchen equipment. Ducasse also had an underground auxiliary kitchen constructed near the restaurant’s south-pillar lobby entrance. Chefs convene there in the early morning to scale fish, butcher chickens, and perform other prep work before sending the partially finished ingredients up to the main kitchen.

The only means that Ducasse’s team had for moving material and people during the renovations was a single freight elevator; the tiny private elevator that transports patrons to the restaurant was unavailable because it, too, was being redone. “It was pretty crazy,” Jouin says. “It all had to go in one elevator, and the pieces couldn’t be big, because you had to assemble them at the top. In the last month [before the opening], we worked almost 24 hours a day. There was no other possibility.”

Ducasse could not alter the odd configuration of the space. The three dining rooms—which seat a total of 120 people—and the kitchen surround the private elevator in a formation that resembles a square donut. Jouin’s design includes two exits at opposite ends of the kitchen to prevent waiters from bumping into each other on their journeys to and from the dining rooms. Having solved the science part of the equation, Ducasse and his chefs can now concentrate on preparing and serving their imaginative dishes high above Paris.