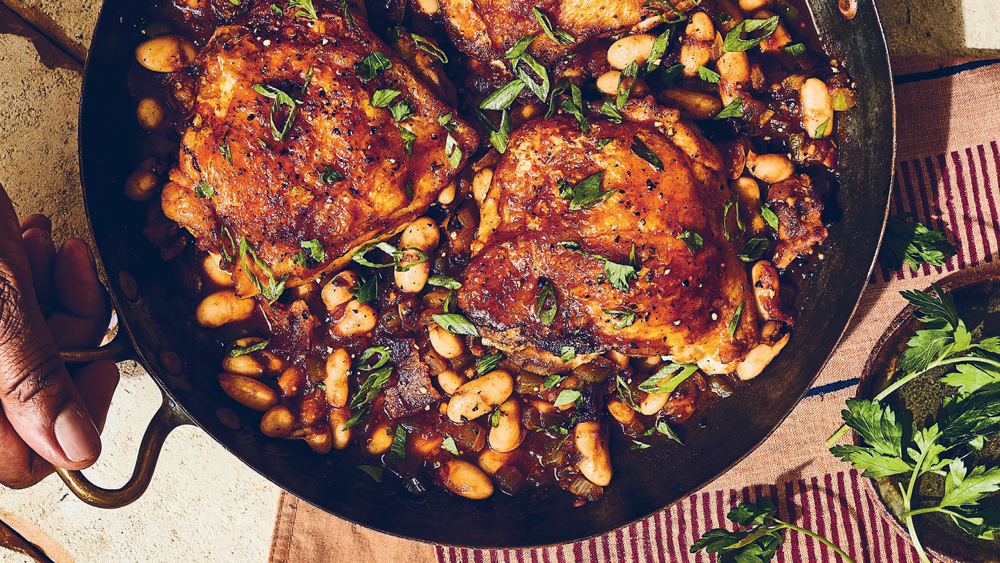 From the 1910s to the 1970s, more than 6 million Black Americans fled the Jim Crow South spreading to northern and western cities in the Great Migration. The exodus to California increased during WWII and the postwar economic boom, and along with Los Angeles’s, San Francisco’s and Oakland’s new population came their culinary traditions. For her third cookbook, California Soul: Recipe’s from a Journey West, chef Tanya Holland presents 80 comforting classics with connections to Southern soul food but shot through with California ingredients, while also telling the stories of pioneers of Black food in America. Here, she shares a favorite braised chicken dish that’s perfect for fall.

Flavor fans know that chicken thighs are the tastiest part of the bird. Braising allows this succulent meat to break down, so it literally falls off the bone! Piling this juicy chicken atop a bowl of smoky white beans means you won’t miss a bit of flavor. Serve this on a chilly fall night with a glass of Pinot Noir and some soothing jazz and you’ll have yourself a whole vibe. If you’re short on time, you can substitute 1 cup of store-bought barbecue sauce thinned with .5 cup of chicken broth.

Season the chicken all over with salt and pepper and set aside.

To make the barbecue sauce:

In a small saucepan, combine the chicken broth, tomatoes, tomato paste, vinegar, Worcestershire sauce, sugar, molasses if using and mustard and whisk to combine. Bring to a simmer over medium heat and cook until fragrant, about two minutes. Set aside.

In a 12-inch ovenproof skillet with a lid (cast-iron is great) over medium heat, fry the bacon until the fat renders and it is crisp. Transfer the bacon to a paper towel to drain, leaving the fat in the pan. Discard all but 2 tablespoons fat (or add oil so you have about 2 tbsp. in the pan). Increase the heat to medium-high. Add the chicken, skin-side down and sear until well browned, about five minutes. Turn and brown the other side, about three minutes. Transfer the chicken to a plate.

Pour out all but 2 tbsp. of the fat from the pan. Reduce the heat to medium and add the onion, bell pepper, celery and a pinch of salt. Cook, stirring, until the vegetables become tender, about five minutes. Add the garlic and red pepper flakes and stir to combine. Stir in the beans and reserved bacon.

Set aside .5 cup of the barbecue sauce and add the rest to the bean mixture along with the chicken broth. Bring the mixture to a boil, lower the heat to medium-low, cover the pan and let simmer, stirring occasionally, for five minutes.

Return the chicken to the pan, skin-side up. Cover the pan and transfer to the oven. Cook until the chicken is cooked through, about 30 minutes. Let sit for five minutes. Sprinkle with the scallions and parsley and serve, passing the reserved barbecue sauce alongside.