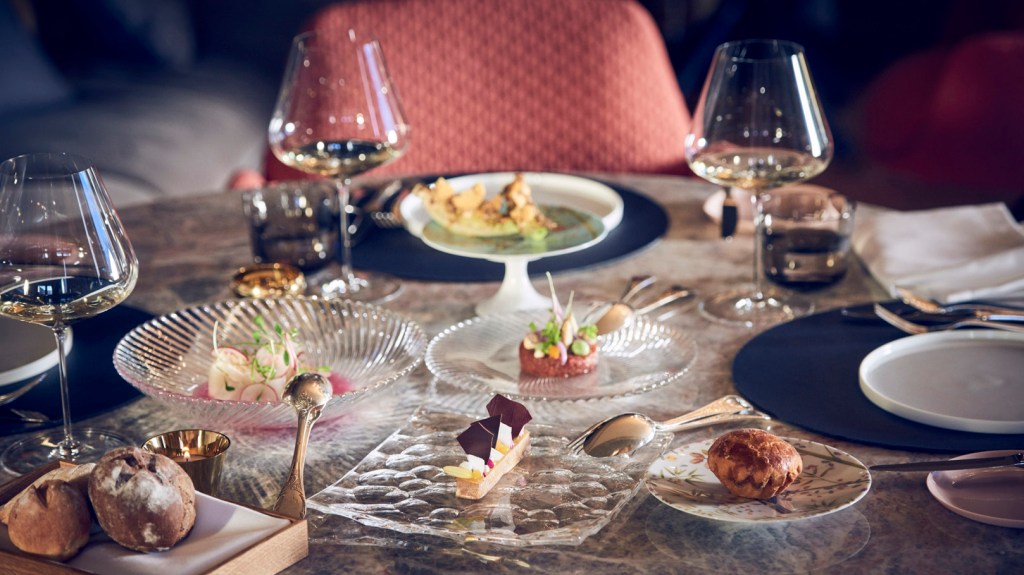 “The foie gras ice cream is not a dessert,” says chef Rolf Fliegauf firmly. At ECCO on Snow, his two Michelin-starred restaurant in St. Moritz, what is served for dessert often borrows ingredients relegated to dinner’s primary courses, say, cauliflower petit fours, praline goose liver, or white fungus with a stock of lemongrass and cucumber. It’s creativity like this inside a growing number of ingredient-driven, modern restaurants in St. Moritz—chiefly known for its world-class winter sports and glitzy ski resorts—that is turning the Swiss village into a culinary Narnia.

Today, there are seven Michelin stars split between St. Moritz and neighboring town Champfèr. In 2008, there were only two stars. One reason for the influx of gastronomic talent here is that St. Moritz has nine five-star hotels, and chefs and hospitality workers come here to learn. That’s how Marcel Skibba—the 31-year-old chef of year-old IGNIV, a restaurant inside Badrutt’s Palace Hotel—received his first Michelin star. He has been under the watchful care of Andreas Caminada, whose other restaurant—the three-star Schloss Schauenstein, in Fürstenau, Switzerland—is where Skibba works during summers.

IGNIV offers a six- or eight-course tasting menu, with each course containing multiple plates that are served atop a lazy susan—it’s fun, and can feel like the Mad Hatter’s tea party. Winter salad is a favorite dish—vegetables marinated, pickled, grilled, and roasted, served with a nutty lamb’s lettuce dressing. A tartare might be made with red peaches instead of beef. Skibba is also proud of his lamb belly, which is made with exquisite care: He puts it in a brine for two days, smokes it, crusts it with a dry rub, covers it in aluminum, and cooks it in the oven before finally frying it. “It tastes like pastrami,” he says.

Another reason the star keeps rising here is international influence—on both the part of chefs and clientele. “The Swiss Franc is expensive compared to the Euro, so European travel has been stagnant over the last few years,” says Richard Leuenberger, general manager of Badrutt’s Palace, adding that there is currently a trend in Brazilian travel. Regulars of St. Moritz eat at the finest restaurants all over the world and often tell the hotel managers what they’d like to see. “Some traditional things, they would never want to go away. But they also want new things. We always have to surprise them,” Leuenberger says. Chefs, too, are traveling and gaining ideas from other cultures. The IGNIV team is currently planning a pop-up in Asia that would last three months.

Today, that global imprint can be experienced all over the village. You can get Japanese Peruvian tiraditos at Matsuhisa, overseen by chef Nobu himself, while Sunny Bar at the Kulm Hotel does Peruvian street food like anticuchos and croquetas. Talvo offers Mediterranean dishes with first-class ingredients inside a 1658 farmhouse—at a caliber worthy of one Michelin star. Tim Raue (whose eponymous restaurant in Berlin has two stars) currently has a pop-up called The K at the Carlton Hotel that’s inspired by Thailand, China, and Vietnam. And when the Kulm Country Club kicked off its 12 million Swiss Franc remodel last year, it celebrated by welcoming Eleven Madison Park’s Daniel Humm (who is in fact Swiss, but incorporated his American and bistro influences).

Adriana Novotna, general manager of the Kulm Country Club (she also worked for the Grand Hotel Kronenhof for fourteen years) says the cuisine changed over the years as her clientele began to want lighter food with less carbs. She has noticed that food has become a motivating factor for people to travel here. “You have ten restaurants at a very high level that you can visit without a car. People like that,” she says.

And that rising culinary prominence has coincided with its annual January food festival, which just celebrated its 25th anniversary. The most recent iteration hosted nine master chefs with equal the number of Michelin stars between them. This year’s array of talent included three-star chef Jacob Jan Boerma from De Leest in the Netherlands, two-star chef Jörg Sackmann from the Schlossberg Restaurant in the idyllic Black Forest, and Ana Ros from the Hiša Franko in Slovenia, who was named 2017’s “World’s Best Female Chef.” She also appeared on an episode of Netflix’s Chef’s Table.

Despite all the international attention, regional classics still shine. Truffle pizza is excellent here, especially as the Northern Italian influence and ingredients migrate up over the border. You can get one of these delectable pies at Chesa Veglia, a former farmhouse-turned-hideaway built in 1650 with creaky floors and charming chalet details. You can also still procure Reto Mathis’ famous version at Che Cha Club, his newly opened, DJ-booth-equipped restaurant and patisserie, as well as his signature seafood carousel. Air-dried meat is a thing in St. Moritz too: The place to go for this is Hatecke, a sleek counter that keeps its Bündnerfleisch, as such meats are called, under glass like jewelry.

To best experience fondue (from the French verb ‘fondre’, meaning ‘to melt’), invented in Switzerland in the 1950s, Engiadina is the pine-paneled place that the locals love. The cozy restaurant also serves raclette, a traditional dish made by cutting a wheel of raclette cheese and heating it over a fire or under a raclette grill. As the cheese melts inside the rind, it is scraped onto individual plates, served with boiled potatoes and meats. And at the new, all-suite Carlton Hotel, its Restaurant Romanoff concentrates on authentically Swiss dishes too, like capuns and barley soup, and leaves the haute cuisine to another on-site restaurant, Da Vittorio. This outpost, which has another three-starred location in Brusaporto, Italy, has earned one star.

Modernization of traditional plates doesn’t seem to interest the Michelin-level chefs very much. “You can’t modernize liquid cheese,” Fliegauf says, later echoing Adriana Novotna’s observation on carbs, “We don’t use potatoes or noodles, no risotto or rice.” In St. Moritz, the new and old guard peacefully co-exist, but run parallel to each other. And it’s an exhilarating experience to toggle between the two.

Meanwhile, Fliegauf busies himself with pairing flavors that his guests won’t expect, like carrots served with chamomile flowers, earthy beets bittered with coffee and brightened with hibiscus, or a long slice of entrecote on a bed of vegetables pickled with umami-rich bonito flakes and vinegar. Even his platings are modern: a ball of foam here, a totem of Carabinero (Spanish prawn) there, radishes like tiny bugles surrounded by bright daubs of yuzu and sauce made with fennel pollen. He says that St. Moritz is a friendly place to be a chef. “You can always call someone and say, can I borrow a few truffles? And everybody says, of course, come and get it. Oysters? Yes, of course. Everyone here helps each other.”