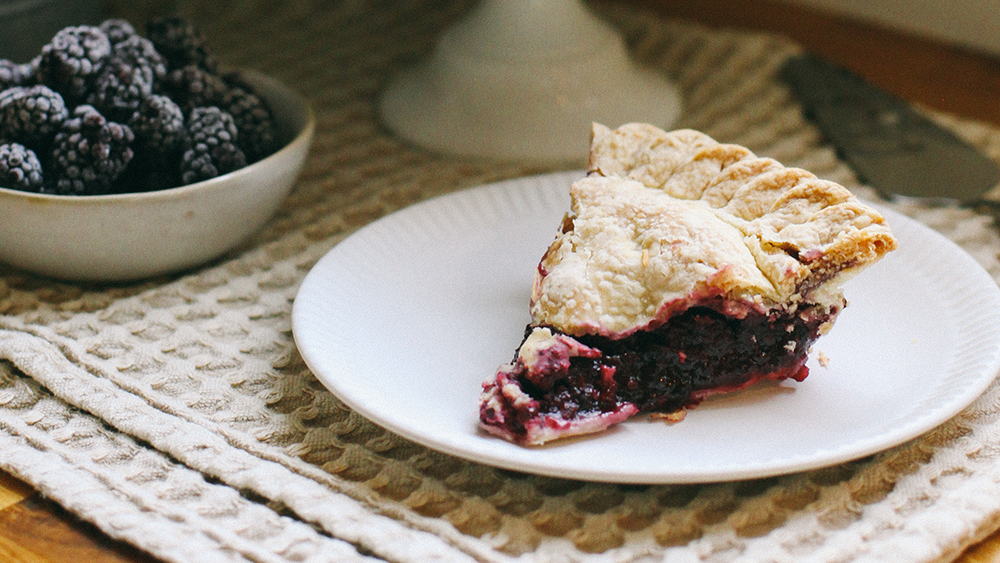 No picnic or backyard barbecue is complete without a pie. And America’s beloved dessert hits a spectacular peak during the end of the season, when bakers can take advantage of extraordinary sun-ripened fruit from across the country. This particular time of year yields an abundance flaky confections bursting with Oregon marionberries, Maine blueberries, Michigan cherries and more.

And thanks to the convenience of speedy nationwide shipping, you don’t have to spend hours in the kitchen with a rolling pin. Leave pate brisee to the pros and indulge in the summer’s best before pecan and pumpkin spice season hits. We’ve rounded up nine of the best pies—from some of the nation’s most acclaimed bake shops—that can be ordered (and devoured) from the comfort of your home.

Photo: Courtesy of You Need Pie!

Since 2006, husband-and-wife team Rick and Val Thompson have been scratch-baking pies using traditional recipes and techniques passed down from generations. Located in the picturesque mountain town of Estes Park, Colorado, the award-winning diner and bake shop churns out handcrafted pies brimming with six cups of seasonal fruit filling and their signature crunchy sugar-crumb topping. This standout flavor features one of summer’s most delightful tried-and-true combinations: tart, tangy rhubarb with sweet, juicy strawberries.

With two locations in Portland, Maine, this acclaimed bakery (which was founded in 2005) specializes in all-American desserts that are made daily from scratch with only the freshest, high quality ingredients. For this classic pie, Maine’s famous wild blueberries are tossed with a sprinkle of sugar and warm spices, then piled into Two Fat Cats’ signature flaky crust made from real butter and local eggs. Maine’s sweet plump berries are the star of this quintessential summer treat, which is exceptional on its own or enjoyed a la mode.

In 1989, Bread & Roses Bakery started out as a tiny alley shop in Ogunquit, Maine. For more than thirty years, the dedicated team has created each pie by hand the old fashioned way, pridefully using time tested recipes. One of their most popular varieties, their Raspberry Pie is scratch made in small batches, with the fruity filling hand-stirred on the stove top—made simply from at least three pounds of fruit, a squeeze of lemon, a little bit of sugar and just enough cornstarch to hold everything together, all nestled in a light, flaky, hand-rolled crust.

In 1985, Broadway actor Arnold Wilkerson started a side business from his love of baking, which stems from vivid memories of his grandmother cutting up freshly fallen apples from their backyard trees for homemade pies of her own. After first opening a pie shop in Manhattan’s Hell’s Kitchen neighborhood, Wilkerson’s homespun baked goods were soon recognized as some of the best in New York City. Decades later, the accolades continue to roll in for the Little Pie Company’s scratch-made desserts. The Three Berry Pie features strawberries, blueberries and raspberries tucked under a handmade lattice crust, which gets baked until golden brown perfection.

Hailing from the Cherry Capital of the World (Traverse City), this family-run business spotlights Michigan-grown fruit in delectable pies that even Oprah has endorsed. While the bakery serves up nearly every variety a pie lover could desire, their popular Michigan ABC Crumb Pie is a medley of local produce—Northern Spy apples, Rubel blueberries and Montmorency cherries—all baked under a toasty, buttery crumb topping.

Helmed by former Miami firefighter Derek Kaplan, this renowned South Florida-based bakery specializes in one-of-a-kind desserts (offering more than 50 varieties of sweet treats), along with savory items such as homemade empanadas and pot pies. Since opening in 2013, the eponymous bake shop may be best known for its legendary Key Lime (made with freshly squeezed juice from nearly two pounds of the local citrus), but another truly unique pie tempted our taste buds. Under a thick layer of homemade streusel reveals a vibrant mix of juicy berries (blueberries, blackberries, raspberries and strawberries) blended with aromatic guava for a tropical twist.

Since being founded in 1999 by the Gerald Roth family, the Willamette Valley Pie Company has been growing several kinds of local berries including marionberries—a blackberry hybrid that’s unique to Oregon’s Willamette Valley and named after Marion county. With a rich, earthy juiciness, the berries have been coined “the Cabernet of blackberries.” More than a pound of marionberries are packed into this best-selling pie, which is scratch made from only seven all-natural ingredients and features a hand-crimped crust.

Jaynelle St. Jean began baking pies as a hobby, giving away slices from a country window staged at her mother’s San Francisco home. Eventually, her passion for pie became her true calling and she officially launched Pietisserie in Oakland in 2010. With a modern and elegant take on pie, St. Jean uses only the finest natural ingredients from regional producers in her sweet and savory artisan pies, which come in five distinct collections: woven, pastel, crumble, open and cocoa. With the perfect sweet-tart balance of flavors, this gorgeous gem in the bakery’s cocoa-based line features two pounds of raspberries encased in a rich dark chocolate double crust.

Lord of the Pies, Emporium Pies

In Dallas’ Bishop Arts District, Megan Wilkes and Mary Gauntt handcraft sensational pies with local, seasonal ingredients—all baked in a remodeled 1930s Victorian bungalow. Emporium Pies puts creative twists on traditional flavors with high-quality ingredients (nothing artificial ever) and whimsical names. Lord of the Pies is a monster of an apple pie: a deep-dish delight boasting ten full chopped apples that get soft-baked with housemade caramel and topped with crispy cinnamon streusel. This towering treat is available for local delivery in the Dallas area and can be shipped nationwide through Goldbelly.