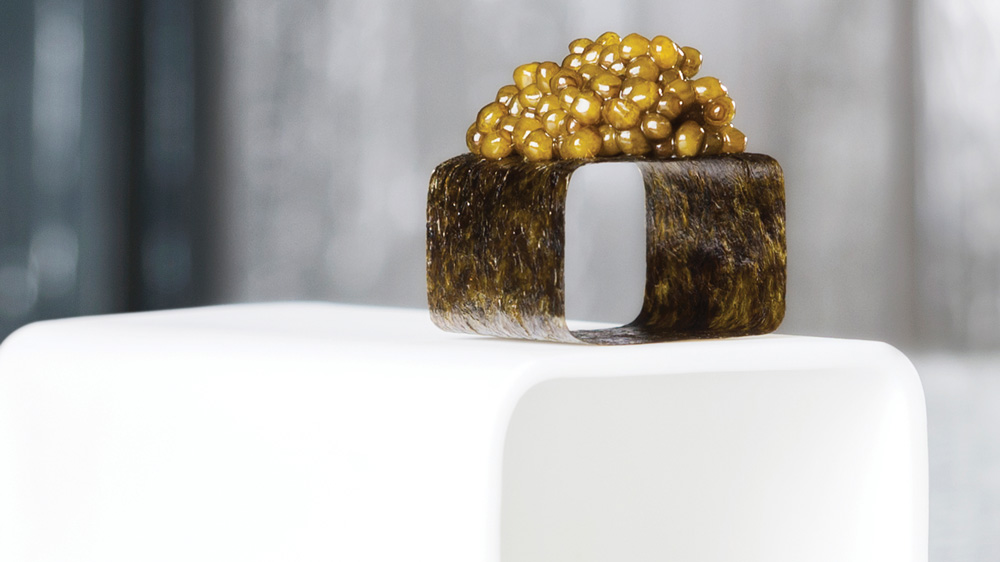 Enigma
Albert Adrià’s long-anticipated restaurant Enigma has a couple things in common with his big brother’s legendary El Bulli—a penchant for complex flavors and textures and an equally impressive legacy. Comparisons end there. While Ferran revolutionized molecular gastronomy in a bucolic rural setting, Albert’s indulgent 50-course tasting menu centers on playful combinations of seasonal and international ingredients and recalibrating the dining experience from a static to a mobile one. This shifting feast takes place in an urban setting that includes a nondescript street entrance in Barcelona and a futuristic, monochromatic gray interior conceived by the chef himself to focus diners’ attention on the food.

The inspiration for Enigma—named after the act of deciphering “mystery” dishes—incubated years earlier at Albert’s 41° Experience, a tiny 16-seat bar pairing gourmet snacks and cocktails that closed its doors in 2014. Enigma serves a $235 menu (minus drinks) to only 28 guests at a time in six distinct areas. At their reservation time, guests punch in a secret code at the entrance and walk down a corridor leading to the first experience: a Japanese ryokan-​inspired area, where they are greeted, offered a scented hand towel, and served hibiscus tea and nibbles—a cereboshi, which is pickled cherry with sakura petals in purple shiso vinegar, and a yuzu-sake crystal wafer sprinkled with wasabi shavings. From there, guests are ushered to each vignette through a meticulously orchestrated service that never seems rushed or prolonged. The Cellar offers tiny courses paired with mini cocktails, such as the nori cube and a blood-orange-​infused sherry.

At the next two stations, the Bar and the Planxa, guests surround staff members who prepare on-the-spot cocktails and morsels devoured in two bites. During the Dinner experience the real game begins, as diners have the option of guessing dish and dessert ingredients—ranging from subtle to convoluted—before the actual flavors are revealed. Here the portions are larger, and standouts include a refreshing two-toned Spanish Raf tomato soup and oysters delicately spritzed with masato, a juice made from fermented Peruvian yuca. Sweets are composed of equally intricate flavors, such as one made with curry foam mixed with pumpkin sorbet, blood orange, peanut, ginger, mint, and sesame.
The final experience is a re-creation of 41° Experience.

For true Adrià fans this is a nostalgic highlight, whether experienced at the end or the beginning of the evening—as Enigma may shuffle its serving sequence to add yet another layer of mystery.—Jessica Benavides Canepa

Astrid y Gastón
Chef Gastón Acurio is a national hero in Peru. When he took time off a few years ago, many expected him to run for president. Instead, he returned to the kitchen last year and spent 4 months changing everything about his flagship, Astrid y Gastón. Located in a splendid 17th-century hacienda in Lima, the once all-white interior now burgeons with contemporary Peruvian artwork, antiques, and rich colors. And the molecular-gastronomy menu has been banished in favor of Acurio’s expressive exploration of Peruvian cuisine. The 15-course tasting menu ($120; $206 with pairings) is a tour de force of his greatest hits, such as cuy prepared in the style of Peking duck, along with new dishes including a sea-urchin salad with soba noodles. Acurio says he isn’t interested in gaining more accolades and just wants to cook and create delicious menus. Are his ambitions that limited? Who knows, but his restaurant is spectacular.—Michalene Busico

La Dame de Pic London
Anne-Sophie Pic’s first London restaurant is both elegant and refined—and it might even sell a few hotel rooms. The Michelin three-star chef’s La Dame de Pic London opened in January in the new Four Seasons at Ten Trinity Square. The $120 tasting menu and à la carte selections are chock-full of high-style French classics—foie gras, Brittany pigeon, Brillat-Savarin-filled berlingots—all impeccably prepared. But the brightest moments come with dishes that depart from the norm. Small nibbles are full of wit and surprise, from the ultrathin dehydrated sunchokes masquerading as leaves in a bowl of real leaves to the molecular bonbons that burst in your mouth with a pop of anise and yuzu. Dessert, meanwhile, is whimsical and light, with a white mille-feuille so sweet and dreamy you’ll be glad you can stay the night.—Jackie Caradonio

Noma Mexico
Pop-ups have become such a regular feature of today’s dining scene that few turn heads any longer. Noma Mexico was the exception. After Danish haute-cuisine chef René Redzepi shuttered Noma in Copenhagen and led similar pop-ups in Tokyo and Sydney, he set out for Mexico, exploring its indigenous ingredients and historic cooking techniques. He took members of his own team but also signed on some new culinary experts to make his stint at Colibri’s La Zebra hotel in Tulum sing this spring with authentic flavors from Oaxaca to the Yucatán. He concocted dishes of young coconut and caviar, banana ceviche, a tostada with escamoles, and a dessert of grilled avocado and mamey seeds. We can’t wait to see what city Noma will pop up in next.—Janice O’Leary