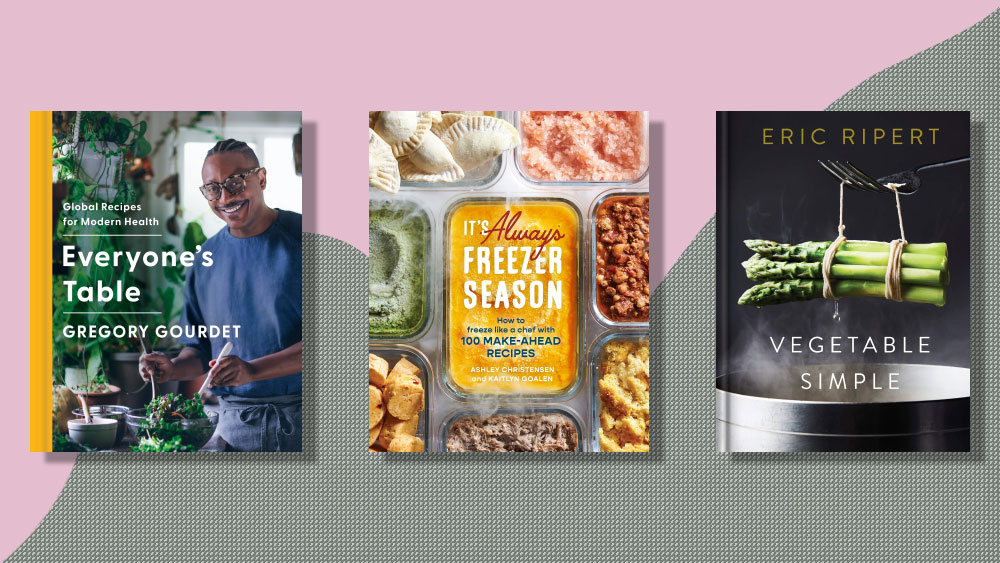 Sure, circumstances may have forced many of us to cook at home a lot more than we may have wanted to over the past year, turning it into more of a chore than something done for enjoyment. Despite that, it’s still one of the best times to experiment with home cooking. There’s a wealth of resources at our fingertips from blogs to YouTube channels to amazing purveyors willing to ship the best spices, sauces, fish, meat and more right to your home. And it’s an especially exciting time in the cookbook world, with a diverse cast of chefs getting to tell their stories and share their techniques.

That’s because this spring, an array of talented culinary voices from across the country have released engaging and enlightening books. They range and vary widely in geography and technique. From a Michelin-starred chef exploring the birthplace of Chinese-American cuisine, a James Beard Award winner teaching the underused value of the home freezer, to a Top Chef fan favorite showing healthier food can still be delicious, these are the best new cookbooks of the season.

Mister Jiu’s in Chinatown is a book in the tradition of many great restaurant tomes: It gives you the true way dishes are made in the restaurant—Brandon Jew’s Michelin-starred Mister Jiu’s—not a version translated with the home cook in mind. This means the recipes are layered, labor-intensive and sometimes multi-day affairs. The moo goo gai pan requires recipes executed elsewhere in the book, like the pickled sunchokes from page 213 and the chicken boudin blanc that’s detailed on page 90. For the fermented grain jook with lobster, Jiu advises you to plan four to five days ahead to ferment the barley and afford yourself four hours the day of to create the chicken broth. The book also departs from the restaurant’s four walls to explore the cultures and customs of San Francisco’s Chinatown and the foundations of Chinese American cuisine.

Sheldon Simeon with Garrett Snyder
Sheldon Simeon believed what had come to define Hawaii cuisine in the rest of the country didn’t fit with the actual food people ate in his home state. His fellow Americans had been sold a myth—a Disneyfied version of the cuisine driven more by what resorts fed tourists. That spurred him to write his debut book, Cook Real Hawai’i, which showcases a cuisine you won’t find at the resorts or the sriracha-mayo-happy poke shops that have sprouted up across the mainland. It’s a culinary sensibility that’s informed by centuries of immigration and colonization, and that could exist only on these islands.

At Home in the Kitchen

David Kinch with Devin Fuller
No disrespect to tweezer food, but you won’t have to worry about breaking out your precision plating tongs to cook the recipes from Michelin three-star chef David Kinch’s latest book. The man behind the dining destination Manresa—as well as Bywater American Bistro and Mentone—has created a collection of what he calls “simple recipes from a chef’s night off.” The tome is still plenty creative though, stocked with dishes like a savory eggplant “paté” and duck breast with braised red cabbage and dried figs. You won’t be overwhelmed by the recipes, but you won’t be bored either.

Ashley Christensen and Kaitlyn Goalen
Let Ashley Christensen, the James Beard Award-winning chef behind a collection of hit Raleigh, NC restaurants—including Poole’s, Death & Taxes and Fox Liquor Bar—teach you some of the culinary world’s dark arts. In this book, Christensen teaches a master class on how to use your freezer to your advantage. It may seem strange to embrace the icebox, because we prize freshness in cooking so much, but Christensen and her wife Kaitlyn Goalen show a world of possibilities. The book is filled with recipes that allow you to make food ahead that isn’t harmed by being frozen, like butternut squash soup, buttermilk biscuits and chicken rillettes.

Roxana Jullapat
For those who really started dabbling in home baking during the lockdown and want to push their knowledge and creativity forward, star LA baker Roxana Jullapat has a book that can help. She provides recipes that get you past just all-purpose flour in your pantry to open you up to the flavors of grains like buckwheat, barley, rye and more. There are recipes both savory and sweet in Mother Grains, from like farro alla pilota to blueberry muffins made with spelt.

In Portland, Ore. Top Chef fan favorite Gregory Gourdet has been working on his wood-fired Haitian restaurant Kann, currently as a pop-up in a yurt village, and eventually as a permanent restaurant in the Rose City. But he was also toiling away at a cookbook that taps into the global flavors he has incorporated into his cooking in the past, as well as the nutrient-dense foods he turned to after he got sober and to fuel his distance running. In Everyone’s Table, he’s developed recipes that support healthy living while not sacrificing flavor.

Rodney Scott and Lolis Eric Elie
Down in Charleston, SC pitmaster Rodney Scott is making whole-hog barbecue that’s so good, he won a James Beard Award as the South’s best chef in 2018. In his debut cookbook he’s partnered with acclaimed writer Lolis Eric Elie to share his secrets for better low-and-slow as well as must-have sides—like cornbread with honey butter and macaroni and cheese—and also shares recipes for backyard grilling, all while weaving in personal stories and the histories of Southern foodways.

Ori Menashe & Genevieve Gergis with Lesley Suter
When husband-and-wife duo Ori Menashe and Genevieve Gergis opened Bavel, the follow up to their hit LA restaurant Bestia, three years ago, they had another sensation on their hands. Though Menashe had cooked Italian food his whole career, he longed to want to tap into the flavors of his youth growing up in Israel. He and Gergis combined that experience with their travel around the Middle East to create a stellar restaurant where cultures from around the region live side by side. Now, they’re also following up their Bestia cookbook with one devoted to recipes from Bavel. Its pages will teach you to make beef cheek tagine, harissa prawns, Persian mulberry pudding cake and more.

Renee Erickson with Sara Dickerman
Food can be transporting. And in Seattle chef and restaurateur Renee Erickson’s new cookbook she wants to take you around the world. Instead of focusing her efforts around her hit restaurants like The Whale Wins, The Walrus and the Carpenter and Bateau, she’s sharing recipes from her favorite regions. You learn recipes from Seattle, sure, but also join her on culinary jaunts to Rome, Paris, Normandy, Baja California and London.

The Food of Oaxaca

Alejandro Ruiz with Carla Altesor
Chef Alejandro Ruiz has become an unofficial ambassador to one of the world’s great culinary regions. The state of Oaxaca in southern Mexico stretches from the mountains and valleys inland, down to the Pacific Ocean, creating a rich biodiversity that fuels the cuisine of the region. His book is a mix of traditional techniques and recipes for things like tamales, moles and tortillas as well as a showcase of original creations he’s served at his restaurants like jicama tacos and Oaxacan chocolate mousse.

Eric Ripert
The chef behind Michelin three-star Le Bernardin is known for seafood, but Eric Ripert has been branching out. In 2016, he introduced a vegetarian tasting menu at the restaurant, for which he explored the possibilities of vegetables as a central ingredient to a plate. With Vegetable Simple, he means the title. He gives you straightforward recipes to maximize the preparation of plants in your cooking. Inside he shows you better ways to sauté, roast, poach your way to success.