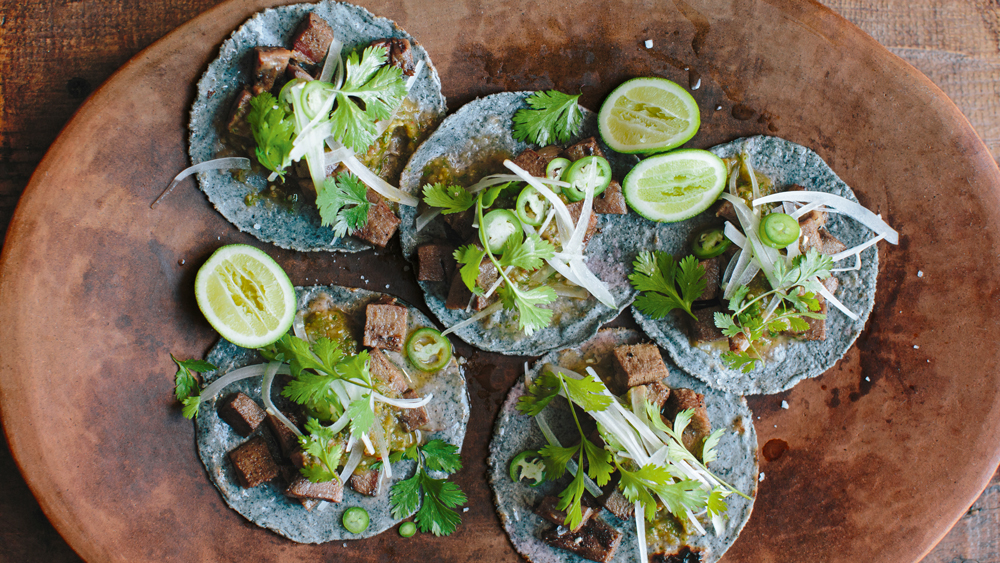 While we’re usually pointing you to the best places to go and let someone else cook for you, we know that making a delicious meal at home can be fun and satisfying too. It’s so easy to get stuck in a rut though, constantly coming back to the few dishes you’ve mastered. Some of our favorite chefs are here to help. This spring will bring a new wave of cookbooks that will give you some inspiration to improve your home cooking. A pair of Mexican masters wants to give you recipes that are more accessible than their award-winning fare, one of America’s best bakers is sharing her secrets, and a Michelin-two-star chef will help you harness fire this summer.

Tu Casa Mi Casa by Enrique Olvera
When we published our list of the 30 Most Influential Restaurants of the Last 30 Years, Enrique Olvera’s Pujol in Mexico City made the cut, with his peers praising how he helped changed the perception of Mexican food around the world. Of course, the dishes that made him famous aren’t quite for the home cook, so he’s created a book filled with 100 accessible recipes that will help you learn the building block techniques and ingredients in Mexican cuisine.

Recipes from across the City of Angels  Photo: courtesy Ten Speed Press

Eat Cook LA by Aleksandra Crapanzano
Instead a one chef exploring their multitude of recipes, writer Aleksandra Crapanzano traverses the City of Angels, highlighting iconic dishes from some of Los Angeles’s favorite restaurants. With a food scene as diverse as LA’s, that project may seem a bit scattershot at first look. But Crapanzano’s approach lets you see the commonalities of the city, in that chefs are taking the region’s excellent produce and deploying it in completely different ways.

Franklin Steak by Aaron Franklin
One of America’s greatest barbecue pitmasters, Aaron Franklin has turned his studious command of fire toward steak. In his newest book he gives an in-depth primer not on barbecue, but on cuts, butchery, dry aging, types of grills and, yes, cooking big slabs of beef. Less a cookbook than a guidebook, there are a handful of the recipes to accompany the steaks you grill this summer.

Baking at République by Margarita Manzke
Margarita Manzke and her husband, Walter, have become LA legends for their outstanding restaurant République. While Walter handles the savory side, Margarita has mastered the sweet, with people lining up for her baked goods. Now she’s letting people in on some of her secrets, publishing her first cookbook, Baking at République. In it she walks aspiring home pastry chefs through multiple types of dough and even a cookie or two.

From the chef behind Cala and Contramar.  Photo: courtesy Lorena Jones Books

My Mexico Kitchen by Gabriela Cámara
At her seafood-driven restaurants Contramar in Mexico City and Cala in San Francisco, Gabriela Camara has found success by taking dishes that weren’t considered fancy, and crafting them with great ingredients and outstanding technique. “In the past, you wouldn’t have seen a tostada on the menu of any halfway decent Mexican restaurant. It wasn’t a refined food. You’d get them on the beach,” she says. Now she serves versions at both of her restaurants. In her new book she shows you the tostada and many more of her great creations.

Vegetables Unleashed by José Andrés
The Michelin two-star chef became a world-renowned humanitarian with his relief efforts in Houston, Puerto Rico and beyond. Looking for more ways to make the world a better place Andrés releasing a cookbook to encourage people to eat more vegetables for their own health and the health of the planet. He looks to his home country of Spain and beyond to bring creative recipes to the plant kingdom.

Charcoal by Josiah Citrin
A few years back, when Michelin two-star chef Josiah Citrin opened a restaurant in Venice, Calif. he didn’t want to be just like his flagship fine dining restaurant Mélisse. At his restaurant Charcoal, he wanted to channel the wood-fired backyard cookouts he’s loves to do at home for friends. In his new book Charcoal he shows you how to master your grill in order to show you how to turn smoke into an ingredient. So you’ll get the instruction on better backyard meat, but also dishes like grilled figs with ricotta, or using charred peaches to take a bellini to the next level.