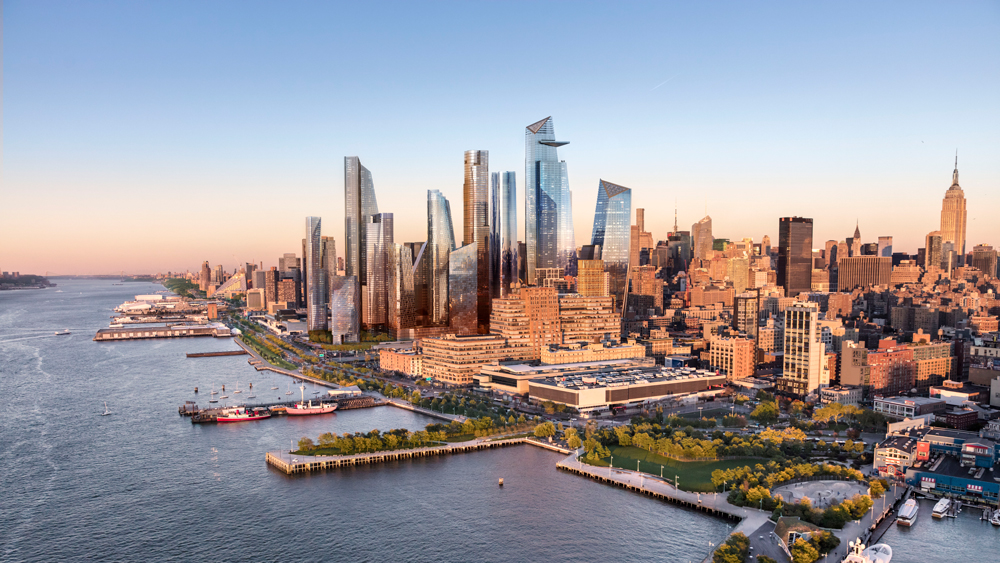 The place to be—and eat—in New York City this month is a mall. On March 15th, Hudson Yards, Manhattan’s massive, eagerly anticipated, skyline-changing, $25 billion neighborhood-unto-itself opens for business, and so did some 25 restaurants and 100 retail businesses. The Shops at Hudson Yards, which includes the city’s first-ever Neiman Marcus, is seven stories and 720,000 square feet. It’s tucked amidst four skyscrapers (including, office, residential and hotel components), “The Vessel” (Thomas Heatherwick’s 16-story interactive staircase sculpture), and non-profit arts center The Shed.

Topping the list of big-name chefs is Thomas Keller, who’s not only opening his first New York restaurant in 10 years, but also helped decide which restaurants would be joining him.

Keller was already familiar with developer Related Companies, which previously built the Time Warner Center, home of Per Se and New York’s first Bouchon Bakery (the third is now at Hudson Yards). Also on board is Momofuku’s David Chang, another Time Warner Center tenant (with Noodle Bar and Bang Bar), who can also count Related chairman and majority owner Stephen Ross as an investor (via his RSE venture fund). Nobel Peace Prize nominee José Andrés and culinary legends Ferran and Albert Adrià (elBulli, Tickets) round out the headliners with multiple Spanish concepts. Those and more make up the seven restaurants we’re most excited about at Hudson Yards.

Dishes like the rotisserie chicken will be carved tableside.  Photo: courtesy Deborah Jones

The Thomas Keller flagship spans two floors, with a lounge (which will include live entertainment) on the 5th floor and dining rooms on the 6th. While the TAK Room won’t be quite like the Copacabana in Goodfellas, Keller told Robb Report the restaurants of that midcentury era certainly inspired him. The restaurant will offer high-end continental cuisine with old-school luxury and service (including tableside preparations). Unlike the rest of the restaurants in this list, TAK Room won’t be opening for service right on March 15, but expect to see some lobster thermidor soon.

Call it a food court or a food hall or a market (after all, it’s right there in the name). Call it a Spanish Eataly or an American Boqueria. Whatever you want to call it, there will be much do and eat at the Andrés/Adrià brothers extravaganza, which includes three restaurants, two bars, 15 tapas kiosks and an actual market, spread over 35,000 square feet.

The restaurants are Lena (live-fire, meat, paella), Mar (seafood) and Spanish Diner (all-day casual); according to Grub Street, an exclusive, high-end collaborative restaurant between Andrés and the Adriàs remains a dream (and top-secret) for now.

Kāwi opens as Momofuku’s largest-ever restaurant, but David Chang is not running the show. It’s a contemporary, Korean-influenced showcase for Seoul native and former Momofuku Ko chef Eunjo Park. Park grew up around Philadelphia, leaving home to put in time at some of New York’s best kitchens—Daniel and Per Se—before working at Chang’s fine dining concept Ko. Deciding she wanted to see the world, she traveled in Southeast Asia before settling in Seoul to cook at Michelin three-star Gaon. But Chang coaxed her back to America, where Park helped open Bang Bar and the new Noodle Bar, while preparing to take the helm of a restaurant for the first time Kāwi.

The restaurant will also have a to-go space, while elsewhere in the Yards, Chang has both another Fuku and the Japanese-inspired convenience store Peach Mart.

Until now, Anya Fernald’s California butcher shop and meat palace has stayed close to home, mostly because it raises, processes and butchers animals from its own extensive farmland. Unlike in L.A. or San Francisco, there’s no full-service butcher shop at this Belcampo, but there is the “butcher-to-grill” entree, in which you get to select a cut of meat directly from the case, for a $20 charge plus market-price (Fernald shared one example with Eater NY: a nearly $40/lb. pork chop from acorn-finished Ossabaw pigs).

Joining TAK on both the 5th and 6th floor of the building is the second New York City spot for renowned Mediterranean/seafood chef Costas Spiliadis, whose Milos restaurants are also in Las Vegas, Athens, Miami, London, and Montreal (the original location). Fish is flown in daily from Greece, Spain and Portugal; during the day, the downstairs wine bar will also be a Greek yogurt bar.

The first American restaurant from the British caterer and restaurant group Rhubarb comes from culinary director Tien Ho (Momofuku, Má Pêche) and executive chef Peter Jin, who spent many years cooking in Hong Kong before landing at the Hotel 50 Bowery. “Asian inspired, international approach,” the menu says, promising to be like “a chef’s travel journal.” Rhubarb and Tien Ho will also be opening a restaurant on the top floor of 30 Hudson Yards, one of the towers.

A classic American brasserie from Michael Lomonaco of New York’s Porter House Grill, and Chris Himmel, who has multiple Boston restaurants, and also happens to be the son of Kenneth Himmel, the Related executive most responsible for Hudson Yards (he’s the President and CEO of its Related Urban subsidiary). In an interview with Bloomberg, Lomonaco was most excited about his plans for a variety of rotisserie meats (including chicken, lamb, and prime rib), as well as fried chicken, pimento cheese (as a bar snack) and an in-house bake shop.