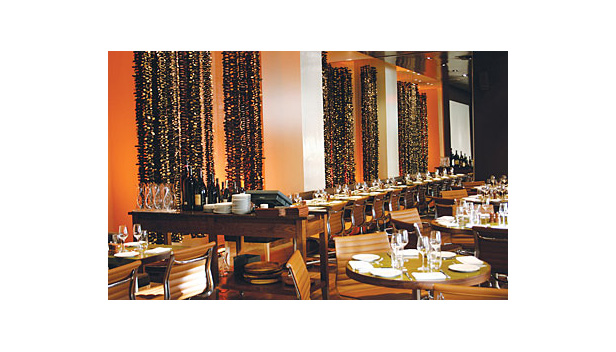 Ad Hoc (707.944.2487), as its name suggests, was conceived by Thomas Keller for a very specific purpose: to generate some cash flow from the former Wine Garden restaurant in Yountville, Calif., while the French Laundry owner grappled with the challenge of transforming the building into his then-latest culinary brainchild, Burgers and Half Bottles. When Ad Hoc quietly opened last September, the impromptu eatery’s temporary status generated significant buzz among food fanatics, who flocked to the unprepossessing roadhouse to sample the $45-per-person prix fixe menu before its doors closed permanently. The dining experience at this homey space is the antithesis of Keller’s flagship establishment: informal, relaxed, and deliciously brief. While some prefer the French Laundry’s seven to 10 courses of intricate and lapidary dishes, fans of Ad Hoc’s four-course, American comfort food menus (which might feature, for example, flank steak, pot roast, or pork tenderloin, as well as savory salads, local cheeses, and fresh-baked chocolate brownies or seasonal fruit tarts) gave a collective sigh of relief when Keller announced in January that, by popular demand, his ad hoc restaurant would remain ad infinitum. –Brett Anderson

Behind the counter at Manhattan’s L’Atelier de Joël Robuchon (212.350. 6658, www.fourseasons.com/newyork), a chef outfitted in a stylish black uniform lowers a dollop of cauliflower cream onto a dish of sea urchin in lobster gelée, one of the specialties at the French chef’s second U.S. restaurant, which opened last September in the Four Seasons hotel. The dish, composed of four alternating layers of sea urchin slivers and lobster gelée, has required an hour to assemble by the time it reaches the garde-manger in the open kitchen that serves as the restaurant’s center stage; the kitchen is ringed by a pearwood counter where diners sit and watch their meals being made. Before he finishes by placing a delicate glass lid on the small egg-shaped bowl, the chef wields a fine-tipped pipette to apply pinpoints of deep green parsley puree, a chlorophyll paste that binds the dish’s flavors. Such a delicacy may seem incongruous with counter dining, but Robuchon’s casual cuisine concept does not apply to the actual food. He has made concessions to the restaurant’s hotel setting, agreeing to accept reservations and seat more patrons than he does at his other L’Ateliers in Paris, Tokyo, and Las Vegas. Still, the prime seats are at the counter. –Laurie Kahle

Feasting on foie gras, truffles, and caviar is fine, but sometimes only a cheeseburger will do. Good chefs understand this truism, and great chefs, such as Frenchman Michel Richard, embrace it wholeheartedly. In January, he opened Central Michel Richard (202.626.0015, www.centralmichelrichard.com) in Washington, D.C., five blocks east of the White House. Richard, who earned acclaim at Citronelle, in the city’s Georgetown neighborhood, enjoys the challenge of transforming comfort foods into refined dishes. The restaurant offers four burgers, including one fashioned from lobster and held together with scallop mousse and another made from sashimi-grade tuna. All are sandwiched in rounds of brioche and accompanied by hot, crunchy, salty fries that have an almost mousselike interior. The crunchy breaded exteriors of his fried oysters encase a sweet bivalve that retains a fair amount of its brine, and his fried chicken, served with buttery whipped potatoes, has a slow-cooked succulence. Richard also applies his wit to conventional French bistro classics. His recipe for 72-hour Asian-style short ribs calls for pressing the boneless beef in a mold and serving it in thick slices, as if it were a terrine of pâté, and his version of “faux” gras blends chicken liver with butter. As if to establish the proper mood for the dining room, Richard decorated one of the walls with a Warholesque abstract portrait of himself laughing. It works; his is one among many smiling faces in the room. –Todd Kliman

Steve Wilson and Laura Lee Brown, great-granddaughter of the founder of the Brown-Forman bourbon whiskey company, keep 500 head of bison on their 1,000-acre Kentucky farm and collect paintings by Red Grooms, Chuck Close, and other contemporary artists. It follows, then, that Proof on Main (502.217.6360, www.proofonmain.com), the restaurant that they opened in March 2006 in Louisville, Ky., features smoked bison pastrami, bison carpaccio, and bison tenderloin; nearly 50 bourbons at the bar (including the rare Woodford Reserve Master’s Collection Four Grain and a 12-barrel lot of 1993 Old Forester Birthday); and an ever-changing selection of artwork on the walls. Chef Michael Paley—late of Lucca at the Boca Raton Resort and Club and Café Boulud Palm Beach—brings panache to a menu that imparts a Tuscan accent to American heartland food. His cured meat tasting might pair Kentucky country ham with prosciutto di Parma, and present braised Kentucky pork shank with crispy grits and green tomato marmalade. (Think osso buco goes to bluegrass country.) Bison tartare, baked octopus, or another small plate from the bar menu makes a perfect foil for a lowball of bourbon and branch. –Patricia Harris

Andrew Carmellini originally did not intend to serve meatballs at A Voce (212.545.8555, www.avocerestaurant.com), the Italian restaurant that he opened in March 2006 in Manhattan’s Flatiron district. But he changed his mind after concocting an alternative recipe: Combine duck leg meat, foie gras, pork, eggs, spices, and bread crumbs; form into meatballs; drizzle with a sauce made from dried cherries, red wine vinegar, grappa, and Japanese mustard powder; serve. His appetizer of duck meatballs appeared on A Voce’s debut menu and never left; it has proven too popular to remove. The 36-year-old Carmellini, who previously worked across town at Daniel Boulud’s Café Boulud, says that first-time diners usually order the meatballs, and that many regulars request triple portions. Patrons are devouring his other dishes, too, including scampi ravioli, roasted beet carpaccio, and citrus tiramisu with Meyer lemon cream. The restaurant has lived up to its name: A Voce is Italian for “word of mouth,” and business has been robust since the opening. –Sheila Gibson Stoodley