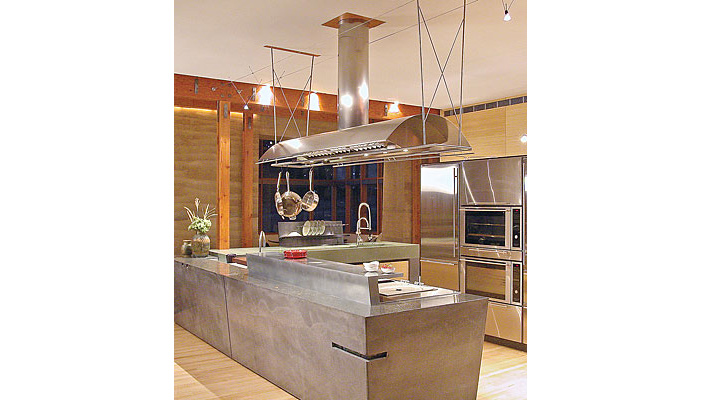 Fu-Tung Cheng, owner of Cheng Design (510.849.3272, www.chengdesign.com) in Berkeley, Calif., initially had no plans to enter the appliance business; he did not expect to sell his restaurant-grade, kitchen-island ventilation hoods individually. Originally, they were only components of the kitchens that he designed. “We didn’t promote the hoods,” says Cheng, who also is a tai chi instructor. “People specifically asked for them after seeing my kitchens in publications.” Cheng’s 16-gauge stainless steel hoods, which are made-to-order by hand on the West Coast, are available in eight distinct models. The Coquille, reminiscent of a slender cowbell, has a hand-burnished ribbon finish and wraparound utensil rail. The gentle-arching and ultrathin Flux is equipped with a spotlight attached to a bar that extends from the hood. More economic models—such as the spice-storing Cache or the retractable Shade—are manufactured by Zephyr (415.282.1211, www.chengdesignbyzephyr.com).

British cabinetry maker Smallbone of Devizes (800.763.0096, www.smallbone.co.uk) added even more refinement to New York’s Upper East Side last July when it opened its first U.S. showroom there. In June, the 31-year-old company will open another showroom in Greenwich, Conn. The two-story building in Manhattan has five completely outfitted kitchens. Among them are Walnut & Silver, which includes black walnut cabinetry that, through the use of low lighting and mirrored plinths, appears to be floating in midair; the bold Arts and Crafts–influenced Mandarin collection; and the more traditional Pilaster, which evokes early Georgian architecture. All offer ingenious and often inconspicuous elements, including anti-slamming mechanisms in the drawers and optional electric locking features that restrict access to off-limits cabinets.