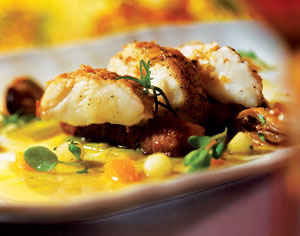 Upping the ante for dining in Las Vegas.

And it should be brilliant. Ogden already holds a James Beard award for Best California Chef, but his James Beard nomination this year for Best New Restaurant in the country is a nod to his culinary mastery, which stands out in a city that has become a lightning rod for the world’s most acclaimed epicurean talent. “The nomination is really a testament to everyone here,” says Ogden of his team. Service is attentive but not nagging, knowledgeable but not conceited. “They make the experience so wonderful for our diners each night,” Ogden adds.

That experience begins in an amazingly tranquil space. The three quiet and comfortable dining rooms belie the fact that the restaurant is just a silver dollar’s throw from the bustle of the Colosseum at Caesars. A modern interior is accentuated with warm woods, subdued lighting, and vivid oil paintings of the California coast that give the setting a relaxed ambience.

In the kitchen, Ogden excels at interpreting New American Cuisine with verve and imagination. The combinations of flavors and textures are seductive because Ogden is an artisanal chef, crafting his signature menus on a daily basis. Oh yes, unlike many celebrity chefs who just cut the ribbons on their Las Vegas restaurants before leaving town, Ogden actually cooks here most nights. His constant presence in the kitchen certainly helps to explain the food’s consistent, overall excellence.

Central to his culinary blueprint are the strong relationships he has forged with boutique farmers, cheese-makers, vintners, and ranchers from all over the country, and he insists on using only their freshest ingredients to create inspired presentations. In such dishes as wood-fired pork chops with red wine cabbage and andouille-shiitake vinaigrette, Ogden balances divergent flavors with such remarkable finesse that dinner becomes a virtual gastronomic journey across America.

“You have to keep striving to get it the way you want it—and that is the joy of being in this business,” says Ogden. “Then tomorrow, you get to the kitchen and do it better.”

With the exception of a short-lived venture in Las Vegas, Charlie Trotter has limited his culinary domain to just one world-class restaurant in Chicago. He has a simple explanation: “Well over 200 offers have come my way,” says the famously meticulous chef, “and they’re pretty much all junk.”

Until now. After more than 16 years in Chicago, Trotter finally found a second home at the One & Only Palmilla Resort on Mexico’s Baja Peninsula. In January 2004, Trotter launched his new restaurant, C, as part of the property’s $80 million renovation.

With sweeping views of the Sea of Cortés, the Adam Tihany–designed restaurant takes full advantage of its coastal setting. So, too, does the à la carte menu, which abounds with selections of just-caught seafood and makes fine use of chiles and other local ingredients. Diners may also invite chef de cuisine Guillermo Tellez to create a customized multicourse meal.

Several hundred wine selections, including many from Mexico, complement the cuisine, while service, as at Trotter’s Chicago flagship, is precise and relaxed. All of which suggests that C was well worth the wait.

Most Japanese food served in America is an impoverished version of the real thing. Whether the dish is sushi, sashimi, tempura, or udon, the ingredients used in American-made Japanese food are not always first-rate and rarely seasonal.

This could soon change, however. Koji Imai, a 35-year-old Tokyo entrepreneur who owns more than 30 restaurants in Japan, is determined to raise the bar for Japanese food in America. In March, he opened Megu—which means blessing in Japanese—in New York, his first restaurant outside of his home country. Superlative ingredients drive his gastronomic mission.

Imai has spent decades cultivating relationships with suppliers who can deliver rare products such as baby river eel, which is in season in Japan for only one day each year. Imai also employs chefs who understand restraint.

egu’s line-caught bluefin tuna, for example, does not come with any superfluous accompaniments. Instead, it is simply sliced and presented on the plate, in keeping with Japanese culinary traditions.

Reach for the Stars

As the showpiece restaurant at Paris’ Hôtel de Crillon, Les Ambassadeurs upholds the distinctly French notion of the gastronomic temple. But the 2003 loss of one of its two Michelin stars prompted the restaurant’s stewards to make changes in everything from the decor to the waiter’s uniforms. Jean-François Piège, an Alain Ducasse protégé, was hired away from the Plaza Athénée in mid-February and named as Les Ambassadeurs’ new executive chef. “We need some new ideas, and Mr. Piège can bring that,” says Premier Maître d’ Hotel Patrice Willems.

Piège has revamped the menu, adding items such as Dublin Bay prawns wrapped in crispy pasta cloaks and daubed with Osetra caviar, as well as meaty pan-fried scallops with leeks and black truffle dressing. While he is a worthy priest of gastronomy, Piège is reluctant to enforce dining dogmas. “I have no specialty myself, because I am making cuisine for others,” he says as Willems translates. “I will follow the people. I don’t want to impose. Maybe in two years, people will like something else, and I will follow and be there.”

The Word on L

Louis Boston, the noted menswear store, recently gave its refined in-house restaurant a complete makeover. Key to the transformation of the relaunched and renamed Restaurant L was the arrival of chef Pino Maffeo. Originally from East Boston, Maffeo spent four and a half years cooking alongside Patricia Yeo, and together they dazzled diners at the New York restaurants AZ and Pazo by applying French cooking techniques to Asian ingredients.

“It’s not fusion at all,” Maffeo says of his delightful cuisine. “I try to take things away rather than add them.” Maffeo’s minimalist approach works because he makes the most of the few items on the plate. The halibut and tofu dish, for example, is simply that: halibut and soft, creamy tofu. It is the statement of a chef with complete confidence in his ingredients.

Epicures who prefer the culinary offerings of France, Italy, and Spain sneer or guffaw when considering the reputation of Switzerland. Its cuisine is generally dismissed as a reflection of the Swiss foreign policy agenda: neutral and isolated. But such ridicule is undeserved. More than one-third of the land is devoted to farming, supplying native chefs with an inspiring abundance of fresh meats, cheeses, and greens.

The country is also the birthplace of Gray Kunz and the up-and-coming Françoise Wicki, 34, who recently arrived at the Jasper Restaurant in the Palace Luzern hotel in Lucerne. With dishes such as pigeon confit on hummus, pappadelle pasta with South African prawns, cream soup with lemongrass and coriander, and a seafood and vegetable tempura, Wicki is awakening gastronomes to Switzerland’s many delectable charms.

The small bronze plaque marking the entrance to Aqua offers little indication of the extravagance inside this San Francisco institution. Behind the restaurant’s granite facade and double-glass doors, metal-framed mirrors stretch to high ceilings in the dining room, where the city’s famously finicky residents feast on decadent selections from new executive chef Laurent Manrique.

Manrique, a foie gras specialist from Gascony, seemed at first an odd choice to replace longtime Aqua chef Michael Mina. But since taking over the seafood-centric kitchen in February 2003, Manrique has successfully infused the menu with earthy ingredients, developing a culinary style that is best described as Bay Area Basque.

Manrique introduces his cuisine with starters such as cassoulet with smoked sturgeon, shrimp boudin, salt cod, and Osetra caviar; and an artisan foie gras plate with Syrah-poached, nougat, and au poivre terrine renditions. Foie gras is also available as a stand-alone entrée or in conjunction with spice-crusted ahi tuna. The Atlantic cod with serrano ham is another satisfying choice, but for a comprehensive Manrique education, try the eight-course tasting menu with pairings from Aqua’s list of 300-plus wines.

Joël Robuchon closed his eponymous Paris restaurant in 1996, but his idea of retirement did not include golf or grandchildren. Instead, Robuchon joined forces with the owners of the French eatery Taillevent to open a restaurant in Tokyo, wrote several cookbooks, and starred in a cooking show on French TV. The May 2003 opening of L’Atelier de Joël Robuchon in Paris marked the 58-year-old chef’s formal exit from his so-called retirement. Although his staff insists that the new restaurant is completely French, Robuchon’s time in Tokyo has influenced the configuration of the dining space. The room’s layout resembles a sushi bar, with just 42 seats arranged around an open kitchen that issues a series of small dishes rather than one large meal. The plates are smaller and more colorful than what you would typically find in France, but they are loaded with items such as tender vegetables, sublime roasted fish, and Robuchon’s signature potato puree. He has absorbed the lessons of Japan, but the soul of Robuchon’s cuisine remains French.