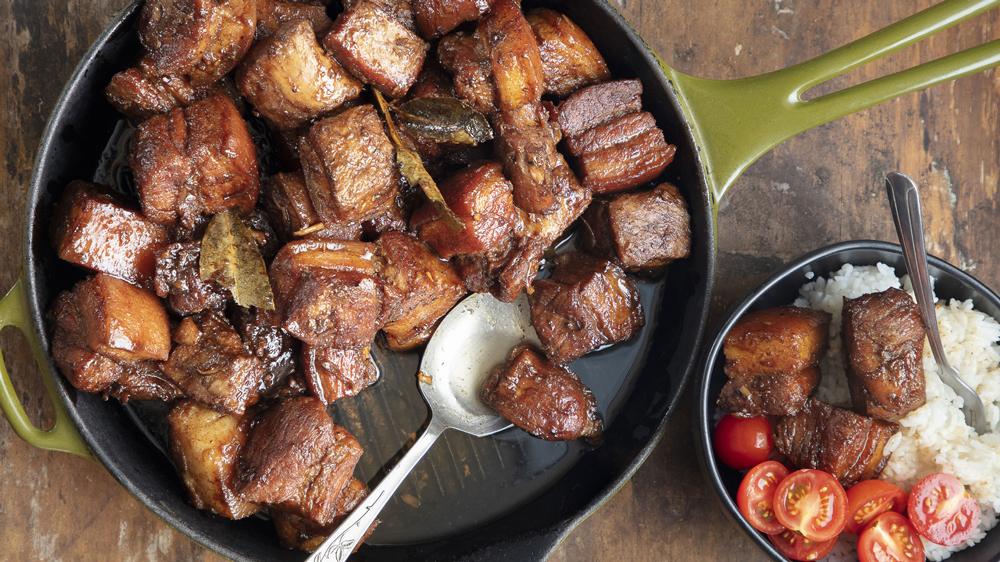 Sheldon Simeon believed what had come to define Hawaii cuisine in the rest of the country didn’t fit with the actual food people ate in his home state. His fellow Americans had been sold a myth—a Disneyfied version of the cuisine driven more by what resorts fed tourists. That spurred him to write his debut book, Cook Real Hawai’i, which showcases a cuisine you won’t find at the resorts or the sriracha-mayo-happy poke shops that have sprouted up across the mainland. It’s a culinary sensibility that’s informed by centuries of immigration and colonization, and that could exist only on these islands.

One such dish is his beloved adobo, where he has mined his own personal history and taken a trip to the Philippines to unlock the secrets of making a dish as delicious as his grandmother used to make. Now, he’s shared that recipe with us.

Adobo is in my blood. From the moment I got my first tooth, I was eating spoonfuls of this iconic savory-sour stew, considered to be the national dish of the Philippines.

At the Simeon house, our adobo recipe went through countless tweaks and twists over the years, from what types of vinegar were used, what brand of shoyu, to how long we let the sauce thicken at the end. Pork shoulder was great, sure, but pork belly in big chunks was even better. We discussed and analyzed so much that we could all have had PhDs in Adobo Theory.

For me, the best adobo was not too soupy, ideally reduced until all the liquid is gone and a glaze forms. All the different seasonings—garlic, bay leaf, peppercorns—should meld together as one. At the end, the meat should start to fry in its own rendered fat, like a confit.

But a few years ago, while filming a show with chef Ed Kenney, I was able to travel to the Philippines for the first time and visit Ilocos Norte, the region where my grandparents were from. I cooked adobo with a local chef, and I noticed he did something different than us, which was to fry the pork before braising it in the sauce. At home, we did the opposite. So I went back to Hilo and cooked that adobo for my dad and told him the story. He looked at me and sort of scratched his head: You know, this actually tastes more like what your grandma used to make.

I realized that our family recipe had been changed or modified or misremembered, at some point, between three generations and thousands of miles. Having that chance to connect with my roots, however, snapped everything back into focus. We didn’t have to debate over the right way to make adobo now because we knew by looking backward. From then on, we cooked adobo the new way, which was, in fact, the old way. One thing that never changes though: We always eat it with white rice and raw tomato, the perfect foil to the rich, tangy sauce.

In a large, deep skillet, wok, or Dutch oven, heat the oil over high heat until shimmering-hot. Pat the pork dry with paper towels. Sear it in the hot oil, turning, until evenly browned on all sides, about 6 minutes. Add the garlic and sauté until fragrant, about 30 seconds.

Stir in the shoyu, oyster sauce, both vinegars, the bay leaves, and pepper and toss to coat the pork belly. Reduce the heat to low, cover, and simmer until the pork has started to soften and most the fat has rendered, 40 to 50 minutes. What you’re going for is not a melt-in-your-mouth bite, but rendered fat and meat with some texture to it, like spareribs almost.

Once the pork is cooked, remove it with a slotted spoon and set aside. If desired, skim off some of the rendered fat and discard (I usually keep it). Increase the heat to medium and reduce the sauce, stirring constantly, until a sticky glaze starts to form. Return the pork belly to the sauce and toss to coat.

Serve with tomatoes and cooked rice.

NOTE: Although pork belly adobo is my favorite, you can also try substituting other cuts of pork, dark meat chicken, turkey, beef, fish, seafood, or tofu. Adjust the simmering as needed, since some proteins will cook more quickly than others