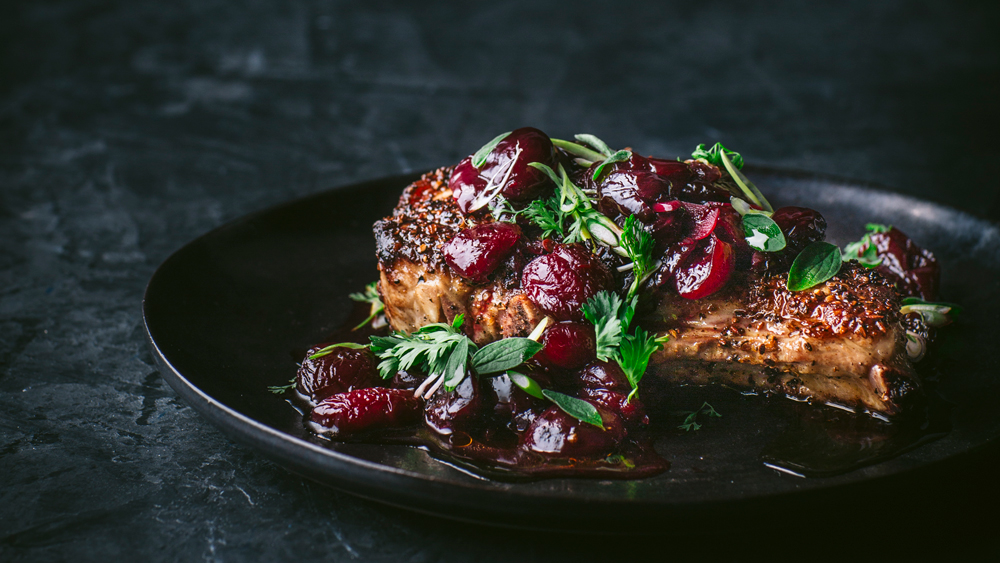 In Portland, Ore. Top Chef fan favorite Gregory Gourdet has been working on his wood-fired Haitian restaurant Kann. Over the winter he previewed the concept—which the wider world learned more about when he won Top Chef’s “Restaurant Wars” episode with last season—as a pop-up in a yurt village. The village has been packed up for now, but Kann should become a permanent restaurant in the Rose City. The last couple years, Gourdet has also been toiling away on a cookbook that taps into the global flavors he has incorporated into his cooking in the past, as well as the nutrient-dense foods he turned to after he got sober and to fuel his distance running. In Everyone’s Table, he’s developed recipes that support healthy living while not sacrificing flavor. Gourdet has shared with us a perfect recipe for summertime cooking with his savory-spicy-sweet pork.

An effortless brine ensures these pork chops are incredibly juicy, and a crust of toasted coriander and cumin seeds delivers a welcome crackle as well as exciting pops of fragrance and flavor. On weeknights, you might stop there to revel in the love from your guests, while on weekends you might go the extra mile, whipping up this quick summery sauce of sweet-tart cherries and smoky, spicy chipotles. Oregano stands strong among all those bold flavors, contributing a hit of freshness along with a little peppery heat.

Note: Once you pit the cherries, the sauce comes together in a flash. I’m a cherry fiend, so I have a cherry pitter, which makes quick work of the task. If you don’t, just cut the cherries in half around the pit (just as you would an avocado), gently twist to separate the halves, and use your tiniest spoon to scoop out the pit.

FOR BRINING THE PORK CHOP

Combine the honey and salt with 1.5 cups of warm water in a medium mixing bowl and stir to dissolve. Stir in 1 cup of cold water. Put the pork chops in a baking dish just large enough to fit them in a single layer and pour on the brine to submerge them. Cover and refrigerate for at least 12 hours or (even better) up to 24 hours. When you’re ready to make the pork, drain the chops and pat them dry with paper towels.

Put the chipotle in a small bowl, cover with warm water, and soak until supple, about 20 minutes. Drain, stem and finely chop the chipotle.

Heat the olive oil in a large, heavy skillet or saucepan over medium-low heat until shimmery. Add the garlic, ginger, and salt and cook, stirring frequently, until the garlic is fragrant but hasn’t taken on color, about 1 minute. Add the cherries and chipotle, raise the heat to high, and cook, stirring frequently, until the cherries release their juices and those juices reduce to a thick syrupy glaze, about 8 minutes. Slide the pan off the heat, stir in the honey and lime juice, then return to the heat and simmer for 30 seconds to meld the flavors.

Cover and keep warm while you cook the pork chops.

Combine the coriander, cumin, and peppercorns in a medium skillet, set over high heat, and cook, shaking the skillet frequently once it gets hot, until the spices are very fragrant, about 3 minutes. Coarsely grind the spices in a spice grinder, stir well, and spread them on a large plate to cool. (The mixture will keep in an airtight container for up to 1 month.)

Preheat the oven to 350 degrees. One at a time, dredge the pork chops in the spice mixture, turning to coat them on all over (top, bottom, and sides) in a thin, even layer and pat gently to help the mixture stick. As they’re coated, transfer them to a plate in a single layer.

Heat a large, heavy ovenproof skillet over medium heat until it’s good and hot. Work in two batches to brown the pork chops. Add half the avocado oil, swirl to coat the skillet, then cook two of the pork chops, flipping once and using tongs to stand the chops on their fatty edge for a minute, until the visible pork is golden brown on all sides and the spices turn a few shades darker, about 6 minutes total. Transfer the chops to a sheet pan lined with a wire rack, wipe the skillet clean, and repeat with the remaining avocado oil and chops.

Put the sheet pan in the oven and roast until the chops are cooked to your liking. I recommend medium doneness (slightly pink in the middle) or until a thermometer inserted into the center of each chop registers 130 to 135 degrees, about 12 minutes.

Let the chops rest for at least 10 minutes. Divide the chops among four plates, spoon on the cherry sauce, and sprinkle on the cilantro, scallions, and oregano.