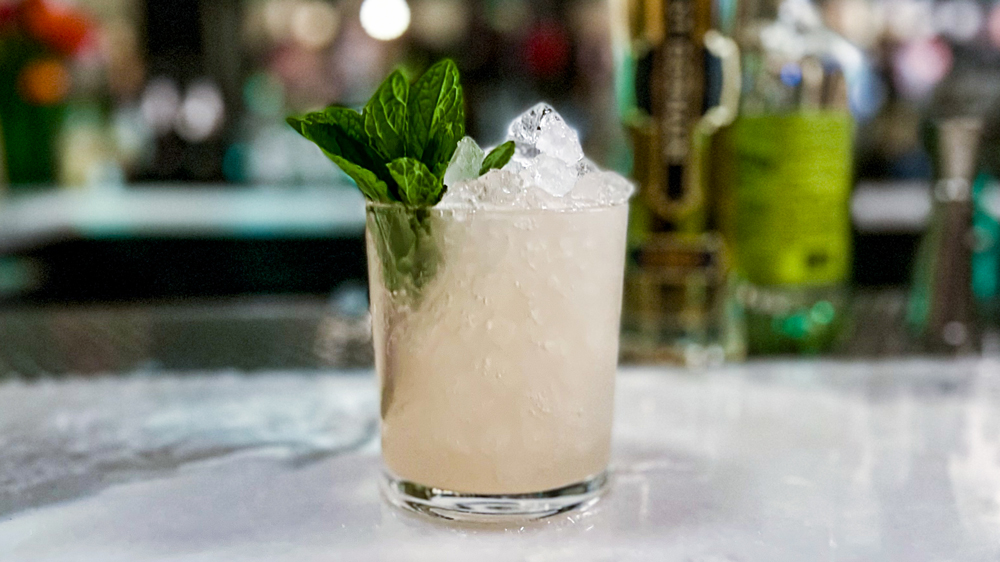 I’ll tell you right now, the Quick Fix doesn’t always live up to its name. It can’t, for example, fix your carburetor, or your relationship with your father. It’s utterly powerless in the face of inflation and has exactly zero effect on the population of the endangered white rhino. In fact, there’s really only one problem for which the Quick Fix is actually a quick fix, but if you ever find yourself to be some combination of hot, tired, cranky and thirsty, I promise you won’t mind the narrowness of the solution.

Most cocktails taste like the ingredients from which they’re made. I realize this is kind of a stupid thing to say, but I say it only to mention that it’s not always true, because sometimes cocktails taste not just like a list of their components but also of their cumulative effect. The Piña Colada tastes like coconut and pineapple, sure, but mostly it tastes like a vacation, as the Mojito tastes like sunshine and the Ramos Gin Fizz like a pleasant dream. Some drinks are so clean and resonant, so effective at delivering their liquid message, that a list of its ingredients is somehow just half the story.

The Quick Fix is one of these, invented by bartender Michael Madrusan when he was working at New York City’s Little Branch back in 2007. In classic cocktail parlance, a “fix” is just a sour on crushed ice and this little four-ingredient snapper is certainly that: Grapefruit and lime juices, with the unaged South American grape brandy pisco and for sweetness, St. Germain Elderflower Liqueur. In and of itself, St. Germain’s inclusion is nothing noteworthy—it is light, bright, floral and soft, and since it was invented in 2007, has impressed us all with its versatility. What is noteworthy is the quantity Madrusan applied to his drink—a whole ounce, which, for a liqueur, is unusual to say the least.

The effect of this is to create a surprisingly resonant and juicy cocktail that manages to never get overly perfumed and never even come close to being too sweet. It works together with the eccentricities of the pisco to create something full bodied but still delicate, persistently floral and textured with grapefruit, with the heavy pour of citrus making it tart and bright and preternaturally delicious. Taken all together, the ultimate charm of the Quick Fix is that it tastes like the first truly warm day of Spring, as well as being an icy reprieve from the sweat and thirst that such a day involves. It’s the ideal drink for a sunny afternoon, so refreshing that it soothes that spot behind your eyes, muting all ambient concerns for as long as there is liquid left in the glass. And if any of that sounds like something you need in your life, well, here’s a Quick Fix.

Add liquid ingredients to a cocktail shaker with a handful of crushed ice. Give a quick shake to integrate the ingredients and chill it down a touch and empty the contents into a rocks glass. Top with more crushed ice and garnish with a grapefruit peel or a sprig of fresh mint.

Pisco: Pisco can vary wildly brand-by-brand, but fortunately, there aren’t the big industrial versions that you’d see in a spirit like, say, Caçhaca. What that means for us is that if a bottle of Pisco has made it to American shelves, it’s probably pretty good. Chile and Peru argue over who makes the most authentic pisco—if you have the choice, go Peruvian, where the regulatory framework is stronger. The best for cocktail work is usually the “Acholado,” which is a blend of grapes designed by the distiller to be a good all-around offer. The bottlings from Capurro, Campo de Encanto and Barsol all work well (as, honestly, will pretty much whatever you find).

Another fun note about this drink is that it’s designed with pisco in mind, but it also tastes great with white rum and pretty good with silver tequila, some gins and even vodka. The tart, floral balance is the real star here—different base spirits will accent that differently, but as long as the spirit is unaged (no color) and not too earthy, you’ll get a good result.

St. Germain Elderflower Liqueur: There are other Elderflower liqueurs, but St. Germain is one of those rare ingredients that seems to somehow elevate whatever it’s in, like Campari and Angostura Bitters and just a handful of others. It’s a peculiar magic and I don’t much understand it, but I’ll say if there’s a better elderflower liqueur out there, I haven’t tried it.

Grapefruit/Lime Juice: Must be fresh, obviously, but the thing to really say here is that grapefruits vary a bit in their relative sweetness and acidity levels, so take the above recipe as a guideline, not a gospel. If you find the whole thing to be too tart or too sweet, raise or lower the amount of lime juice a touch to compensate. A quarter ounce up or down will be more than sufficient.

Crushed Ice: Crushed ice melts faster and keeps the cocktail maximally chilled and diluted, and in this case, “cold” is one of the ingredients. You don’t strictly speaking need it—if you use regular fridge ice and shake it for an extra long time (12 to 15 seconds), it’s a decent simulation. If you have the means, though, it’s worth the extra effort.

Garnish: Madrusan originally garnished this with a mint sprig, which works, but I’m not so convinced it’s better than a grapefruit peel or just lime wheel or something. It definitely leans into the “refreshing” aspect of the drink and if you have one, feel free to use it, but even if you don’t have any mint around, you should still definitely make this drink.