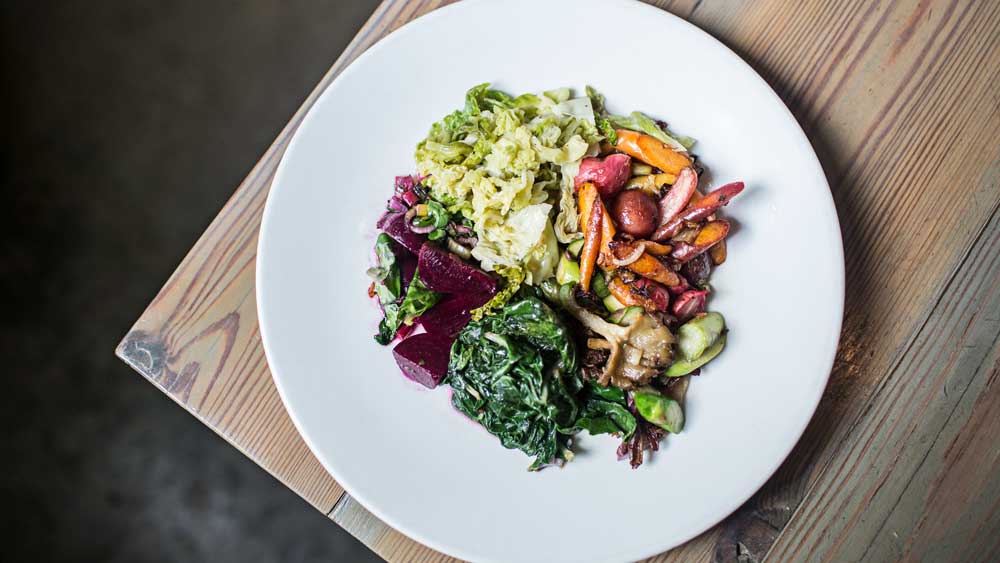 It’s Super Bowl Week, and everyone from Patriots fans to Rams fans (they exist!) to football fans in general are heading to Atlanta to take in the big game. We wanted to know the best places to dine right now in the city, so we called on James Beard Award–winning chef Steven Satterfield of Miller Union to give a guided tour of Atlanta’s culinary gems.

Satterfield opened Miller Union nearly a decade ago, gaining acclaim for his farm-to-table cuisine, served inside a cozy space that’s a mixture of industrial and farmhouse design elements. “The restaurant is relatively rustic—there’s not a lot of modernity to the food in the sense that we’re not manipulating ingredients to be something totally different,” Satterfield says. “We’re trying to let the ingredients shine on the plate.”

Like much of the country, Atlanta’s food scene has really changed this past decade, as the city’s population grows. “We’re starting to see more multicultural food happening all around the city, pop-up restaurants, tiny DIY places, and big restaurants with good design—it just really runs the gamut,” Satterfield says. “We have a strong farmer’s market scene here, and I’m proud that there’s a lot of seasonal cooking where people are interpreting the same ingredients in different ways.”

From a little bar near Mercedes-Benz Stadium to the city’s best bakery to an outstanding seafood restaurant, here are Satterfield’s picks for eating right in Atlanta.

Ticonderoga Club
“It’s this great little place in the corner of a food hall. It’s a pub that serves great food, but it’s not a traditional pub. They’ve got a well-curated selection of wine and beer and make any cocktail you want. One of the guys is from New England, so they do a great fried clam sandwich that’s simple but delicious. The place is fun, edgy, and has excellent service.”

Root Baking Company
“This bakery started in Charleston and expanded to Atlanta. They make all their own breads. They mill their own flour. They also do pastries. And they do delicious prepared food. It’s a great place to go for breakfast or lunch, and their bread sells out daily. It’s the best bread in Atlanta by far. They have a really incredible croissant egg sandwich. And I like it because it’s a slightly smaller croissant, so it’s not this huge commitment. The croissant is really well made with lots of great crispy, feathery layers.”

Watchman’s
“This is in the Krog Street Market and has the same owner as Kimball House in Decatur. It’s a really good seafood restaurant that’s beautiful and fun and has great drinks. The preparations are simple, and you can do anything from the raw bar. They have excellent oysters, clams, and shrimp cocktail. They also have really great vegetables and salads.”

Lloyd’s
“This is a relatively new place with a hilarious late ’70s, early ’80s vibe. It’s a dive bar, but brand new. They have American beers like Hamm’s and they don’t have fancy spirits. The food is really really really simple, but actually quite well done. It’s a fun place to go hang out. The slogan is ‘Where nobody knows your name.'”

Freedom Market
“On a Saturday morning, it’s fun to go to one of the farmer’s markets. There’s one in the parking lot of the Carter Presidential Center called Freedom Market. There are great growers here that we buy from directly for Miller Union. There’s always a live cooking booth going on and people selling market-inspired bites.”

Elliott Street Pub
“If you’re looking for something near the stadium, there’s this little dive bar where we actually had our Miller Union holiday party. It’s a great vibe. And it’s a hidden gem. They have deli sandwiches and cheap beer; it’s a no-pretense kind of place.”

Minero
“There’s an old Sears distribution building for the Southeast that has been converted into the Ponce City Market. There are a lot of options here and Minero is one of my favorites, which Sean Brock used to own. He’s left the company, but they’re still going strong. They have these char-grilled chicken wings that they toss in Valentina sauce that are fantastic. They have incredible sauces and creams, one that they make with benne seeds, which is the heirloom sesame from Anson Mill. The restaurant is delicious, well done, but not authentic in any way, shape, or form.”

One Eared Stag
“This is a little off the beaten path in Inman Park, but I really like this place for brunch. And it’s an eclectic menu. Some of the ingredients sound like weird pairings, but it always works. It’s in an old brick storefront, and the walls are all painted white on the inside. They have some taxidermy and great, big plate glass windows that bring a lot of light to the room. And it’s just delicious. They often have a Dutch baby pancake that’ll be sweet and savory. I went in the summer, and they had a blueberry Dutch baby that had shaved country ham and bitter greens on top. It’s that awesome mix of a little of sweet, a little of savory.”