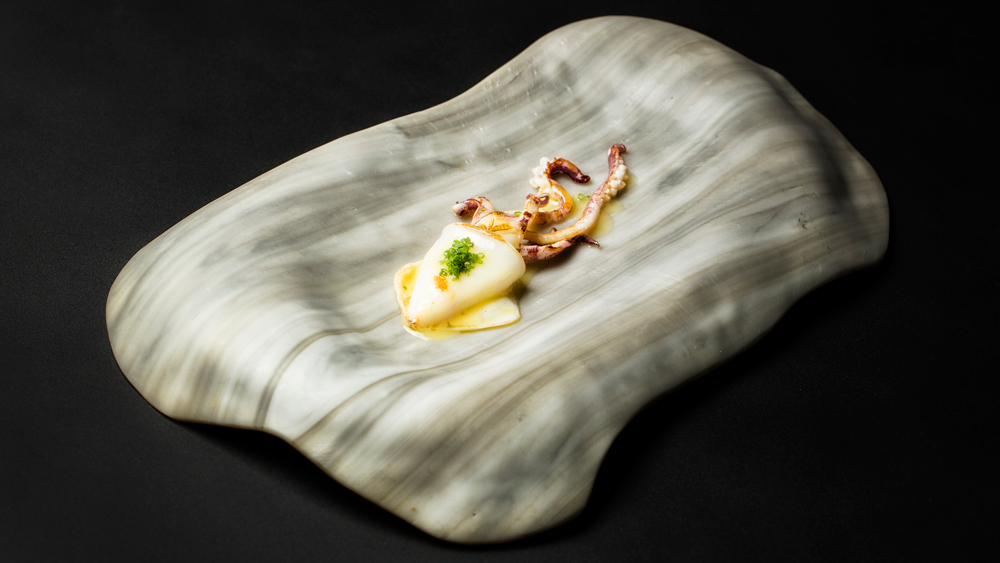 Lisbon, once an insider’s secret, has emerged from austerity in recent years as one of Europe’s most dynamically buzzing cities, as well as a culinary powerhouse. Diners can now choose from a heady mix of classic kitchens that honor the Portuguese cookbook and larder, and stylish new restaurants working to update those traditions. Where to find the best the city has to offer? Start here.

One of Portugal’s master chefs, José Avillez has planted restaurants all over the country but his Bairro do Avillez represents his best patriotic paean to the Portuguese kitchen. Designed as a mini-Lisbon neighborhood, Avillez’s mammoth space in the center of Chiado scoops in a range of distinct eateries, including a surf and turf double act. The front of the Bairro features the Taberna dining room, where the open kitchen is fringed by hanging joints of ham and the menu spotlights Iberian meat. And tucked just behind the ode to all things porky is the seafood-focused Páteo dining room, where the chefs grill the freshest daily catch in another epic open kitchen.

Can’t miss dishes: the suckling pig sandwich at Taberna, and the brothy lobster and shrimp rice at Páteo.

When Anthony Bourdain anointed Cervejaria Ramiro the best seafood kitchen in Lisbon snaking lines  started collecting at the no-reservation restaurant’s front door. Thankfully, though, the long running eatery, originating in 1956 as a beer hall, ignored all the buzz and has stayed true to its scrappy self. The ground floor dining room, anchored by a tile mural of crawling crustaceans, is still a scramble of scuffed floors and weathered wood tables, the career waiters still haul trays of garlic shrimp and mammoth crabs, and plenty of locals are still hammering away at their seafood with big wooden mallets.

Can’t miss dishes: the sweetest giant tiger prawns, split in half and topped by a lemon wedge and a light spray of salt. And your best chance of eating them without a hefty wait? Come between 3 and 5 in the afternoon, when the lines grow shorter.

Overlooking the Tagus River, in Lisbon’s waterfront Bélem district, the Michelin-starred Feitoria is the preeminent, swanky splurge restaurant in a city that mostly dispenses with formality. Thankfully though it doesn’t take itself too seriously. Fronted by a big gold-leaf Japanese screen representing Portuguese traders docking in Tokyo, the neutral dining room keeps the focus on the watery scenery itself, framed by big picture windows, and chef João Rodrigues’ zealously foraged food. How zealous? Offering a very performative spotlight on the chef’s sourcing, the waitstaff typically hauls a big basket of raw chanterelles to the table, in a version of culinary show and tell, before serving you the plate of wild mushroom rice dish.

Popular consensus has it that pastéis de nata, the egg custard tart that pops up in every local bakery, is pretty much the signature dish of Lisbon. And the best place to get them, according to conventional wisdom—fueled by way too many Instagram posts—is the iconic Pastéis de Belém that first helped popularize the treat. Locals though disagree. If you don’t want to join snaking bus tour lines venture instead to Manteigaria, on the edge of the boho Bairro Alto district, where the much shorter queues are filled with savvy Lisbonites, for good reason. The pastry’s caramelized crown crackles a bit more loudly here and the custard seems creamier.

Lisbon’s splashiest opening of the year is the One Palácio da Anunciada, a renovated 16th century manor in the central Baixa district upcycled as a multi-use hotel, wine bar, and cocktail lounge. The palace’s real star though is the Condes de Ericeira restaurant, which is worth a visit for the setting alone. All high baroque drama, the restaurant’s dining room, overlooking one of Lisbon’s largest interior gardens, is a whirl of gilded mirrors and painted ceiling frescoes. The menu follows opulent suit with a posh Iberian goes Mediterranean slant characterized by guinea fowl with black truffle and a foie gras terrine paired with fig jam.

A wide variety of tartares is available at Tartar-ia.  Photo: courtesy Time Out Market

Can’t miss dishes: It’s hard to go wrong anywhere, but start with fried soft-shell crab from Marisqueira Azul; then one of the vegetable tartares from Tartar-Ia; and finish with the steak sandwich—a local culinary icon known as the prego—from O Prego Da Peixaria.