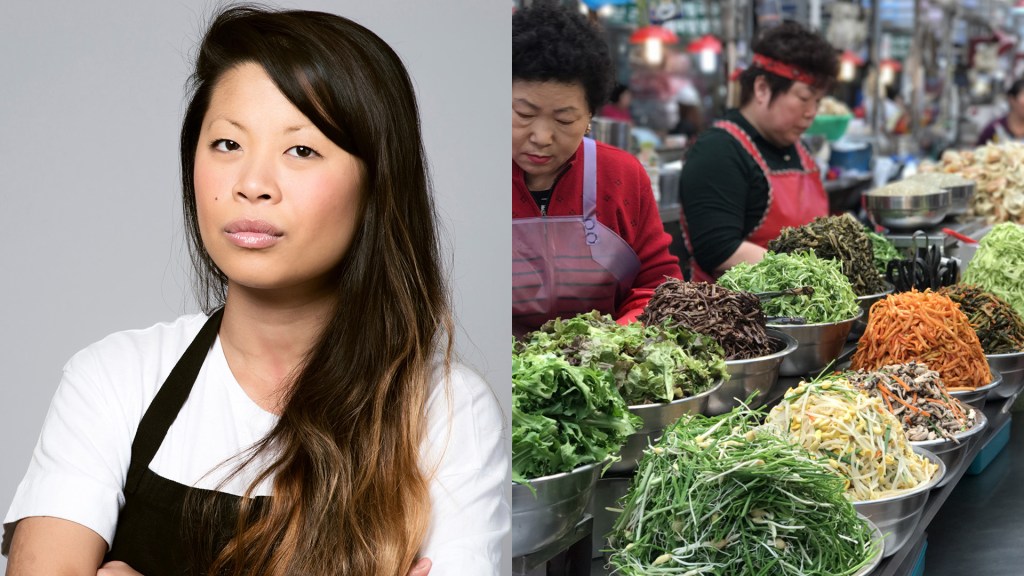 When Top Chef Season 12 winner Mei Lin isn’t planning pop-up dinners with fellow chef friends, hanging out with Oprah, or testing recipes for her forthcoming restaurant, she’s globe-trotting in pursuit of her next great meal. When she returns, she reports back on the highlights of her travels to let you know the food you should not miss.

I don’t think I’ve ever had any bland Korean food. The country’s cuisine is synonymous with bold flavors, from sour to spicy to salty to sweet. So I get excited about visiting Seoul to experience how those qualities come through no matter what level of dining you’re interested in—from wandering Gwangjang Market for street food at its best to eating at three-Michelin-starred Gaon. Here are my favorite places to eat around town, but first a pro tip: Google Maps and Apple Maps won’t work to give you directions, so you’ll need to download a Korea-specific app like Naver to make sure you don’t completely get lost.

Head to lunch at this family-owned establishment, which has been in business since 1953 serving their specialty, Hamheung-style naengmyeon. What is that? It’s a dish of cold noodles and icy broth. Hamheung-style is typically made from potato starch, sweet potatoes, and arrowroot starch, which gives the extra-thin noodles their distinct chewy texture. Naengmyeon comes in both bibim (mixed) and mul (water) styles. The signature dish to try here is bibim naengmyeon, served with a sweet and spicy sauce, cold brisket slices, and a halved boiled egg. But my go-to is always Mul naengmyeon because I love the icy-cold, vinegary broth. Bring a friend and you can order one of each.

My No. 9 pick of the top things I ate in 2017, the gomtang at Hadongkwan is legendary. Located in the heart of Seoul in the Myeongdong neighborhood, Hadongkwan has been serving its gomtang to patrons for more than 70 years. Gomtang is a soup made with oxtail bones and brisket and is served with rice. You’ll normally encounter gomtang at breakfast, accompanied with condiments like Korean coarse salt, black pepper, spring onions, and kimchi. Truly comfort food at its best, this dish is so homey and satisfying that I could definitely eat this every day. It’s similar to Chinese congee—which, for anyone who knows me, that’s my kryptonite.

One of two three-star Michelin restaurants in Seoul, Gaon is a high-end, elegant restaurant taking a contemporary approach to Korean cuisine. The restaurant doesn’t have your typical tables with an open environment; rather, it hosts five private dining rooms for each party. You walk in, and it may feel a little cold, but once you’re in your room, it’s really warm and inviting. That private space makes it really fun—not all stuffy like some three-star restaurants can be. The dish that stood out to me was mountain green rice with Swiss chard. Daily milled kimpo rice is cooked with mountain greens and 11-year-old aged soy sauce and is served with Swiss chard soup with various ban chan.

Balwoo Gongyang refers to the act of eating as part of practicing discipline and self-control. Located next to a Buddhist temple, this Michelin-starred restaurant made some of the best vegan food I’ve ever tasted. Korean temple food doesn’t contain any garlic, green onions, chives, leeks, or onions because they hinder spiritual practice. Despite not having these basics, they still made such flavorful food. In addition, they make the gochujang, doenjang, and soy sauce all in-house. I especially enjoyed the sweet-and-sour mushrooms along with pickled lotus root, burdock, mung-bean pancake, grilled tofu, temple mandu, and naengmyeon (cold noodles). I am eager to make another trip to Seoul just to eat here again.

Gwangjang Market has been open since 1905 and is the oldest remaining daily market in South Korea. Covering about 10 acres, it has more than 5,000 shops and stalls employing around 20,000 people. When you arrive here, you may be really overwhelmed and intimidated, but believe me, you will get over that. There are so many different food options—kalguksu (pictured), bibimbap, mandu dumplings, live octopus (you have to chew it quickly because the suction cups will suck onto the side of your mouth!), mung-bean pancakes, kimbap, and much more. Make sure you bring cash; some of the stores accept credit cards, but generally the stalls are cash-only. Most foods are $3 to $5 each.